Scientists are perfecting a futuristic carbon material that could change civilization

Akin to carbon fiber, super-thin and super-strong, humanity may soon master the production of this carbon allotrope 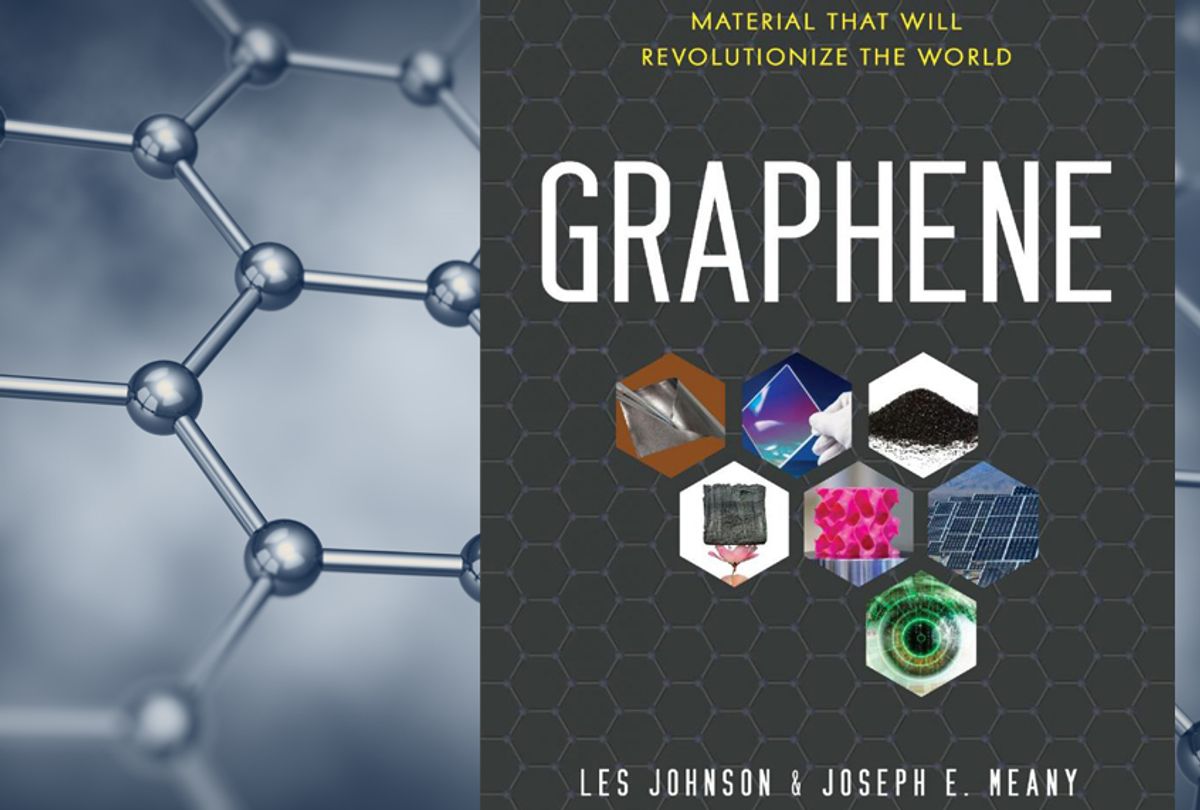 Graphene: The Superstrong, Superthin, and Superversatile Material That Will Revolutionize the World by Les Johnson and Joseph E. Meany (Getty/virusowy)
--

Excerpted from "Graphene: The Superstrong, Superthin, and Superversatile Material That Will Revolutionize the World" by Les Johnson and Joseph E. Meany (Prometheus Books, 2018). Reprinted with permission from the publisher.

What if you discovered an infinitesimally thin material capable of con­ducting electricity, able to suspend millions of times its own weight, and yet porous enough to filter the murkiest water? And what if this substance was created from the same element as that filling the common pencil? This extraordinary material, graphene, is not a work of science fiction. A growing cadre of scientists aims to make graphene a mainstay technological material by the second half of the twenty-first century. Not satisfied with that timeline, some entrepreneurial types would like to see widespread adoption of graphene within the next decade. How could this be possible?

Graphene is elegant. It is created from a single element, carbon, formed by just one type of bond. Despite graphene’s apparent simplicity, isolating the material was an elusive “Holy Grail” for chemists and physicists alike. Even as the periodic table extended beyond the hundred-odd elements naturally found on Earth, galaxies were charted, and the human genome solved, this material, with the simple chemical formula of C, remained a distant goal at the frontiers of science. Why was this? Graphene excels at hiding in plain sight, and the techniques and instrumentation perfected in the last two decades have played a pivotal role in its discovery.

Carbon, the sole constituent of graphene, is all around us. The element is the fourth most common in the entire universe. Most people think of materials in terms of atoms and molecules, where molecules are made from defined types and numbers of atoms. With graphene, counting carbon atoms is inconsequential. Merely the way in which the constituent carbons are bound to one another is crucial, with this feature separating graphene from other wholly carbon materials like diamonds and graphite. At the atomic level, the exclusively carbon graphene resembles a hexagonal “chicken wire” fence, with each carbon atom making up the point of a hexagon. The hexagonal distribution makes graphene’s earth-shattering properties possible, as the distribution allows the individual carbon atoms of graphene to lay flat.

This property of graphene cannot be overlooked. Graphene is a perfect anomaly in the world of chemistry—a flat, two-dimensional molecule, with a single sheet of graphene measuring only one atom thick. You might imme­diately question the structural integrity of graphene due to its delightfully simplistic construction, but the weaving of the carbon hexagons throughout the structure makes the atomically thin material unexpectedly strong.

Proper application of graphene holds the key to revolutionizing mate­rials technology in the latter half of the twenty-first century, but at what cost? Thankfully, not a substantial environmental one. There is a critical difference between graphene and another linchpin of modern technology, rare-earth metals. These hard-won rare-earth metals, metals including tan­talum, neodymium, and lanthanum, are found everywhere, from the inside of our smartphones to pharmaceuticals. Unlike with rare-earth metals, we do not need armies of manual laborers assisted by heavy equipment and an endless parade of fifty-five gallon drums of polluting solvents to find and retrieve graphene, due to one simple fact: graphene’s elemental con­stituent, carbon, is all around us. The most common precursor of graphene today is the mined mineral graphite. Rare-earth metals are scarce, but the integration of graphene into our lives would not be driven by the acqui­sition of raw materials and disputes between superpowers, but would be guided by the possession of knowledge, with patents and technology sepa­rating the victors and the vanquished.

You have experienced synthesizing graphene, maybe even earlier today, on a very small scale. The pressure exerted by your hand and finger­tips likely created a few layers of graphene the last time you ran a pencil across a notepad, turning humble graphite into graphene as you wrote this week’s grocery list. But if graphene can be made by such simple means, and its sole constituent, carbon, leads oxygen, nitrogen, and hydrogen in the hierarchy of elements that construct our living world, why is graphene just now, in the twenty-first century, coming to the forefront of human understanding?

The answer to this question is where the story resides. The story of graphene is a story of accidental discovery. A story of corporations and gov­ernments racing to spend billions of dollars in hopes of funding research and development projects to discover a material still years away from store shelves. A story of new materials that will disrupt the way we create things, and, in doing so, what we can create. The previous technological revolu­tions taught us many things. Each new discovery allowed us to break into new experimental territories and further our understanding of what is pos­sible to accomplish. Chemical batteries allowed energy to be stored for future use (like light at night). Steam power allowed us to generate tremen­dous amounts of energy to accomplish tasks no living thing could. This new revolution may allow us to throw off the shackles of metallic wires.

Since at least the 1950s, people have been trying to take graphite out of the ground and turn it into a pile of black gold. This effort was met with fifty years of resistance from the graphite, which has not so easily been coaxed to divulge its secrets. When graphene was finally isolated and examined, physicists and chemists were astounded at what they found. The history beneath this discovery is not so straightforward, though, and it traces its roots all the way back to 1859 in Great Britain. How appropriate, then, that the country already well-known for its history involving carbon should be the country where single-layer graphite was finally witnessed.

After two researchers in Great Britain, Konstantin Novoselov and Andre Geim, were awarded the Nobel Prize in Physics in 2010, technology magazines everywhere heralded a new era of “wonder materials” based around this atomically thin tessellation of carbon atoms. With its incred­ibly high strength and almost impossibly low electrical resistance, graphene pulled back a hidden curtain, allowing scientists to catch a glimpse of the marvels that lay beyond. With the shrouds lifted, the groundwork was laid to revolutionize how we will go about designing and making everything from cars to vaccines and from food packaging to spaceships.

The economic potential of this material cannot be understated. Being atomically thin, graphene can be incorporated almost seamlessly into any modern product, with appreciable effect. Early investors were burned, however, by entrepreneurs who over-promised and under-delivered on performance aspects for products (especially composites like plastics) that had graphene in them but that did not use graphene in a way that made its incorporation worth the added expense. It was, in some cases, just an added bit of snake oil. As the overall volume from new production methods and the quality of the resulting graphene have both increased with time, we are starting to finally see graphene’s true benefits. Governmental support is higher than ever in many countries, as whomever discovers a high-throughput production method for pristine graphene will reap signifi­cant financial rewards on the world stage.