Trump's State of the Union speech will be praised, won't it?

Trump is often lauded when he shows restraint and poise, but it hardly lasts and it was likely never genuine 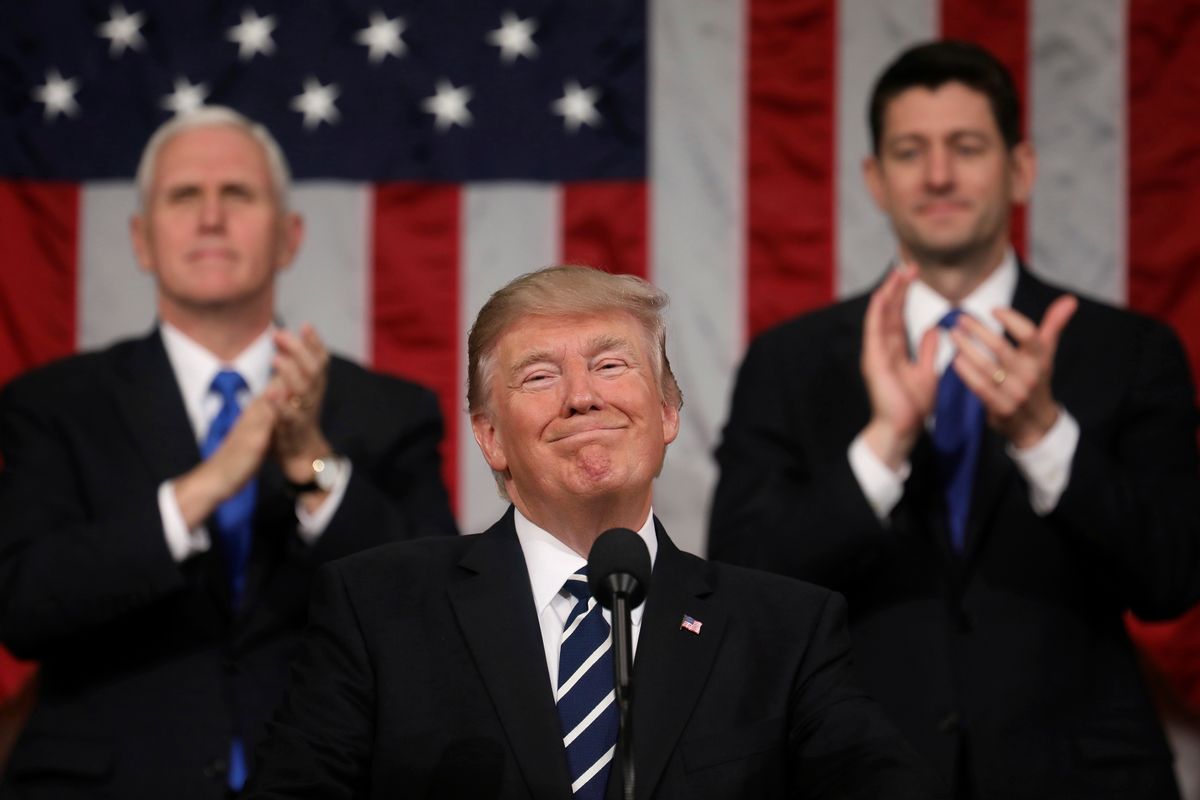 CNN's Fareed Zakaria continues to compliment President Donald Trump whenever he acts like a normal, professional human being. That means that, despite what Trump has said or done, he'll likely be praised for his State of the Union speech.

On Sunday, Zakaria lauded Trump for being able to read a script, during the president's World Economic Forum speech in Davos, Switzerland.

"Ever since Donald Trump was elected president, I have said that when he did something right, I would say so," Zakaria said. "That’s gotten me into trouble with some readers, but I’m going to do it again."

Zakaria called Trump's Friday speech "forthright, intelligent and conciliatory." He also noted that the president embraced the world and didn't condemn it.

But any prospect that Trump will suddenly change, show signs of improvement or develop restraint has waned dramatically since pretty much day one in the White House. Then-press secretary Sean Spicer strolled into the briefing room to demand reporters respect the Trump presidency and to inform them that the attendance at his inauguration was the largest in history.

The so-called new Trump is likely never going to arrive. Behold the glowing praise last year, after he spoke to Congress in March.

That "new Trump" was rather short-lived.

Zakaria did say he understood Trump's tendency to lash out or speak off the cuff with little regard for the substance or impact of his words: "If the speech represents a new approach for the president, it will be a huge step forward. But of course, the problem with Trump is that, by tomorrow morning, he might veer off in an entirely different direction."

Zakaria broke down the Trump presidency into three main components:

Trump 1 is the circus — the tweets, the outlandish claims, the reality-TV-like show. Trump 2 is the dark populism and the demagogic assaults on minorities, the press and the judiciary. Trump 3 is the conventional Republican president, following a fairly standard GOP agenda — tax cuts, deregulation and a hawkish foreign policy, guided by mainstream advisers such as National Economic Council Director Gary Cohn and Defense Secretary Jim Mattis.

"We could be entertained by the circus, and we should be appalled by the demagogue, but we have to be encouraged by Trump the Republican," Zakaria wrote.

In reality, however, no one has to be, or should be, "encouraged by Trump the Republican." This is because he wouldn't look much different from the way Republican Party politics has operated in recent decades. In other words, he'd just be putting the mask back on; he'd be a wolf in sheep's clothing. Trump the Republican may appear more genuine, but he also helped rush through a deeply unpopular tax bill that overwhelmingly benefits the wealthy.

Additionally, last April Trump launched a unilateral military attack against Syria's sovereign government, which some legal experts at the time said was a violation of the Constitution, seeing as Congress played no role. Either way, it was a topic of debate, which, in itself, is enough to question whether or not the executive branch may be overstepping its boundaries with little checks in place. Instead, Trump received copious amounts of praise throughout the media and even from the Democratic Party.

Zakaria paved the way. "I think Donald Trump became president of the United States last night," he said at the time.

With Trump's State of the Union address approaching, it's worth keeping an eye on the media coverage. The media will likely laud his "presidential" poise and demeanor, while being far less scrutinizing of the content of his speech or the validity of it. Last year, the president's joint session speech was welcomed with praise, and many hoped that the bombastic campaign candidate had taken new form. Time has shown that was never, and likely never will be, the case.