Go left, Democrats! Ditch the Blue Dogs in the midterms 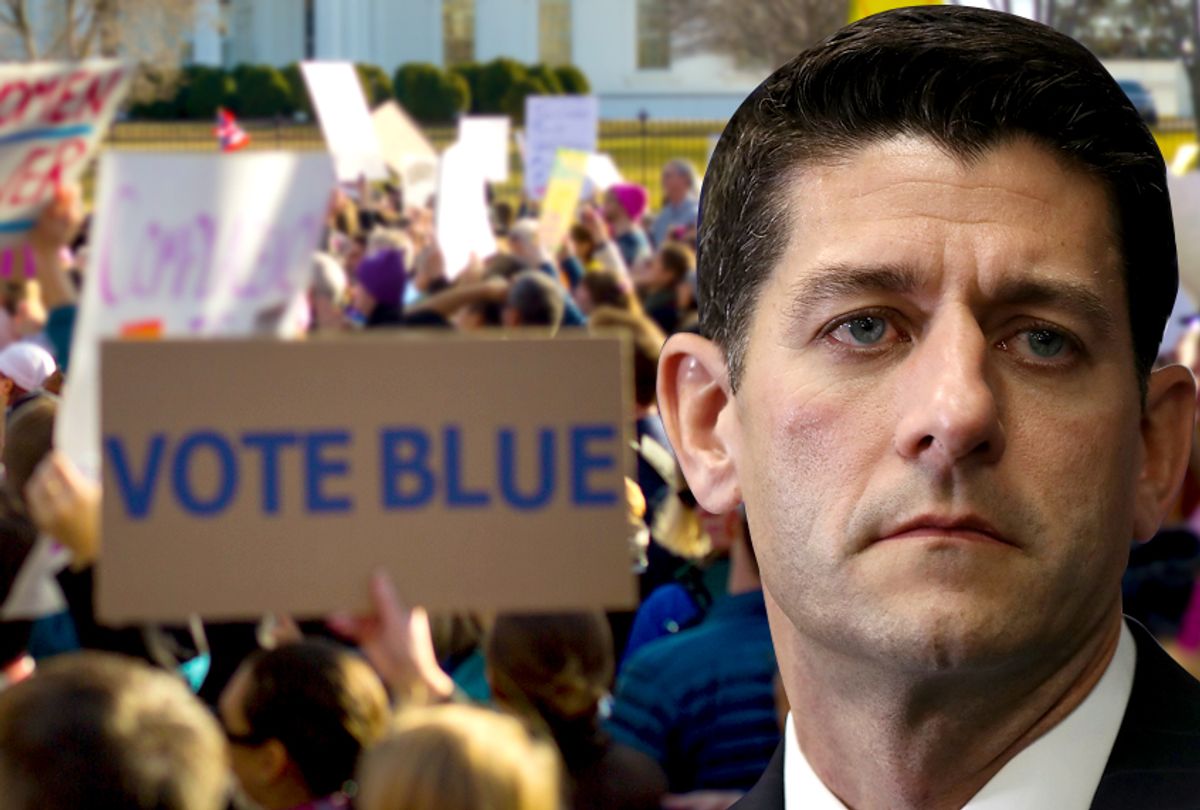 Democrats, hoping to ride the fabled "blue wave" back to control of at least one chamber of Congress this fall, smell blood in the water. At their twice-annual luxury retreat for wealthy donors on Monday, the political network backed by billionaire conservative brothers Charles and David Koch outlined their plan to save congressional Republicans from what looks like near-certain electoral doom. We are still 10 months away from the first national elections of the Trump era. Calling it the toughest election Republicans have faced since the libertarian-leaning industrialists began investing billions in the GOP, the president of the Kochs' political advocacy arm, Americans for Prosperity (AFP), announced plans to increase campaign spending by 60 percent over 2016, to a whopping $400 million.

“One last number I’ll add: 80,” AFP president Tim Phillips told hundreds of conservative mega donors gathered in California. “That’s the number of seats we believe that will be competitive in the end, this fall. Eighty. Math’s not my strong suit, but these are daunting numbers.”

Phillips continued the sobering analysis. “The election year of 2010 is similar to 2018, with one big difference: this time we’re on defense.” Democrats only need 24 seats to boot House Speaker Paul Ryan, who was the beneficiary of half a million dollars in campaign contributions from Charles Koch just days after the passage of the GOP’s tax plan late last year. On Monday, the Koch brothers’ network specifically identified 16 congressional districts where Republican incumbents have retired and Democrats look likely to flip the seat. A few short hours later, another high-profile Republican announced his planned retirement.

Rep. Rodney Frelinghuysen, R-N.J., who has won re-election very comfortably for more than two decades, announced he would not seek re-election this fall, becoming the eighth GOP committee chairman to announce his retirement in the 115th Congress. Frelinghuysen most recently took 58 percent of the vote in 2016, while Donald Trump defeated Hillary Clinton by barely a point in Frelinghuysen's district, in the wealthy western suburbs of New York City. Frelinghuysen’s retirement leaves only three incumbent Republicans in New Jersey’s congressional delegation.

Moderate House Republicans like Frelinghuysen who represent swing districts are heading for the hills. Trump’s politics of vengeance has hit Republicans who represent districts won by Clinton in 2016 (or nearly so, as in this case) the worst. Frelinghuysen voted in favor of Republican attempts to repeal Obamacare and then refused to face his constituents at town halls. His vote against the GOP’s tax plan, which specifically eliminated deductions favored by Frelinghuysen's tax-weary voter base, apparently could not protect him from what is shaping up to be a brutal midterm for his party. (Historically, a new president's party suffers in the succeeding midterm election, and that effect is likely to be exaggerated this year.)

It’s clearly rough out there for Republicans in the House of Representatives, but what may be less obvious is how that provides a prime opportunity for progressives who want to push Democrats to the left.

While five of the first six Republicans to quit during this term did so to accept jobs in President Trump’s administration, Democrats’ attempt to regain a House majority relies on a number of high-profile Republicans' planned retirements. Freeing the field of an incumbent advantage allows not only a chance for Democrats to compete in the general election, but also an opportunity to nominate candidates who more accurately represent the most motivated Democratic voters.

Take, for instance, the seat vacated by veteran Rep. Darrell Issa, R-Calif., in the coastal suburbs of San Diego. Democrat Doug Applegate came within 2,000 votes of unseating Congress’ wealthiest member in 2016, as Hillary Clinton won the district by more than seven points. In 2012, Mitt Romney beat Barack Obama by that same margin in the district. With Issa’s retirement, Applegate, a retired Marine colonel, is being challenged by progressive clean energy professional Mike Levin. Both Democrats are campaigning on a decidedly progressive “Medicare-for-all” platform.

Throw out the conventional wisdom that contested primaries hurt a party’s chances in the general election (which was likely never true anyway). A competitive Democratic primary could get more people involved in the process, boosting turnout in November’s general election. Look to Virginia's gubernatorial election in 2017 for the clearest example of how that might play out in the Democrats’ favor. Some Democrats feared that a primary challenge by progressive Tom Perriello in the Virginia race could fatally wound establishment favorite Ralph Northam, but the intra-party competition led to increased media coverage and intense voter interest. After beating Perriello in the primary, Northam went on to trounce Republican Ed Gillespie by nine points in an election most observers expected to be neck and neck.

In midterms, low voter turnout makes the size of the Republican base in many purple-to-red districts appear much larger than it actually is. Coupled with egregious gerrymandering meant to dilute the influence of the Democratic base and rampant voter suppression, midterms and other non-presidential elections have helped Republicans build what can seem an impregnable political power base.

But this year, Democrats hold a larger advantage in the so-called generic ballot -- that is, in hypothetical competitions between unnamed candidates of both parties -- than in any midterm since 2006, another blue wave that ousted a Republican majority. Women, in particular, favor Democrats over Republicans by a 16-point margin. Democrats would be wise to take such an opportunity to push for actual progressives in the primary, especially where Republican retirements allow for a wide-open competition. A blue wave is coming. Electing more moderate, poll-driven, "blue dog" Democrats to ride that wave would be a grave mistake.