Trevor Noah: Hillary Clinton is on "the wrong side" of #MeToo

And she's not the only famous liberal woman undermining the movement 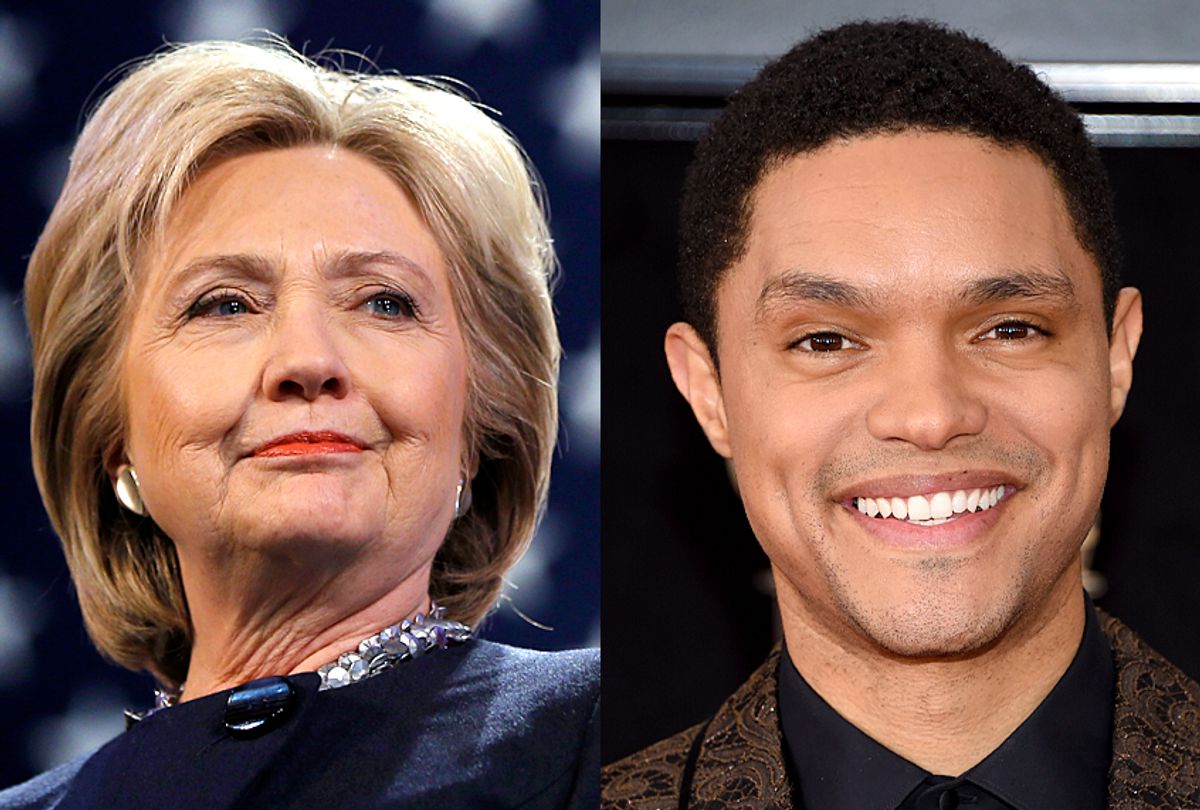 Trevor Noah called out Hillary Clinton Monday night for being on "the wrong side" of Time's Up and the #MeToo movement. He referenced a New York Times exposé that claims Clinton protected a top adviser of hers who was accused of sexual harassment by a woman staffer during her 2008 campaign.

Reportedly, Clinton's campaign manager and other employees recommended that he be fired for his misconduct, but Clinton refused, docking several weeks of his pay and moving the woman who made the allegations to another post in another department within her campaign.

"Hillary's Grammy cameo came at a weird moment for her," Noah said on "The Daily Show," speaking of the "Fire and Fury" parody at the Grammys Sunday that featured celebrities like Snoop Dogg, Cher and Clinton reading excerpts from the book. "Because last night's theme was #MeToo, Time's Up, which is a message Hillary found herself on the wrong side of over the weekend."

"Look, there's a few areas where I don't necessarily expect Hillary Clinton to nail it," Noah continued, "managing emails, visiting Wisconsin, you know, weaknesses. But I won’t lie, I expected standing up for a woman on her staff to be one of her strengths. So the story is disturbing."

Noah said it was puzzling that the woman was the one reassigned after coming forward with her accusations, essentially punishing her while the accused was shielded. "It's possible that Hillary Clinton had a good explanation for why she kept this guy on over the objections of her top campaign advisers but instead of an explanation, all we got was this."

"Yeah, 'women deserve to be heard,' and then quietly reassigned," Noah said. "'Thank you for speaking up — now into the closet.'"

He acknowledged that 10 years ago was a different time, and many people in positions of power were not so inclined to believe women coming forward with accusations about sexual misconduct in the workplace. But still, Noah said, it could be a powerful statement if Clinton admitted to the fumble and that she was once "part of the problem."

"It feels like Hillary’s not only trying to dodge all the blame, she wants to present herself as having always been on this woman’s side, which doesn’t fly, because not only did the woman get reassigned, but this guy, Burns Strider, he went on to get another job in Democratic politics, where he got fired for doing the same thing to other women," Noah said. "So you could argue that if Hillary had fired him, she would have been protecting many women, instead of just herself."

While Noah is doing important work in holding Clinton accountable, other famous women are questioning the validity of the #MeToo movement, mostly because it's resulted in complications for men they like or admire.

On "The View," host Joy Behar interrogated Sen. Kirsten Gillibrand, D-N.Y., about her call for former Senator Al Franken to resign after being publicly accused of sexual misconduct by eight different women. Specifically, she questioned why he was targeted over President Donald Trump (accused of sexual assault, harassment and misconduct), failing to realize that accountability is not an either or.

Gillibrand said in response, after definitively declaring that she also believes Trump needs to resign, "we should be holding all our elected leaders to the highest standard." Indeed, wanting Franken to get a pass would be no different from wanting Trump to get one. Standards apply to everyone or they are not standards at all.

Monday, actor Diane Keaton sent out a tweet in support of Woody Allen, who's been accused by his adoptive daughter Dylan Farrow of sexually assaulting her when she was seven. Keaton claimed, "Woody Allen is my friend and I continue to believe him."

Similarly, television host Wendy Williams railed against the #MeToo movement, saying she was "sick of it." "I love that people are speaking up for the first time and coming out but I look at all men like you’re a 'me too,' all of 'em, all of 'em, which is not fair," she said during the "Hot Topics" segment on her show.

Minus Williams, we're seeing a trend of liberal-leaning women like Keaton, Behar, Lena Dunham, and even Clinton (if the news about Strider is true) supporting #MeToo until accusations reach men they either are fond of or represent their values. But that's not solidarity. That's not even ethical, moral or, arguably, feminist.

If your commitment to a cause ends where inconveniences for you or someone in your life begin, then you're not committed to, or even supportive of, that cause at all. If there is to be a substantial cultural shift toward equality, toward justice, then it's imperative that women and men are brutally honest about their missteps and the missteps of the people they hold in high regard. Be they decision makers or your loved ones, we must be open to the fact that men of every political party, profession and character are capable of misconduct. To excuse the behavior of one abuser is, in many ways, to excuse the abuses of them all.