Both the state and national Republican Parties have denounced Arthur Jones. Yet CNN gave him a platform 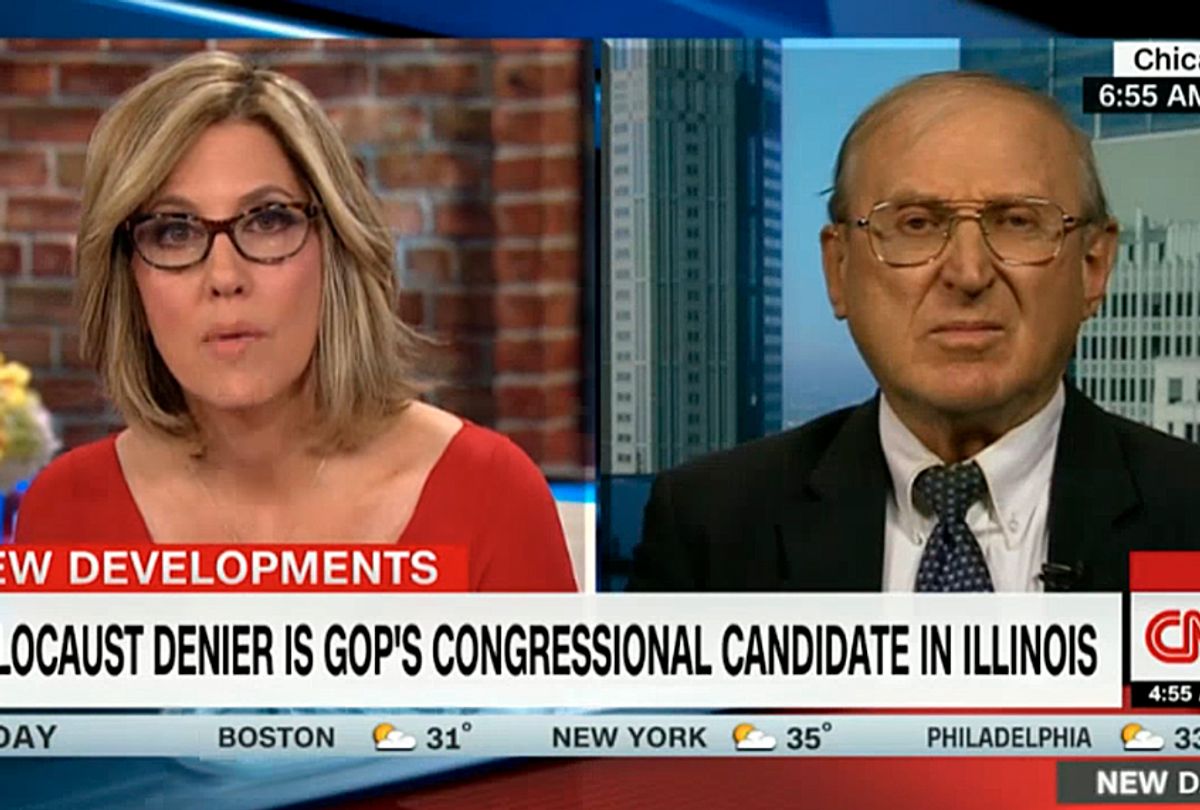 In an instance of an admitted and recalcitrant white supremacist and Holocaust denier being given a mainstream news broadcast platform, Arthur Jones, a Republican congressional candidate running unopposed for Illinois' 3rd district, made an appearance on CNN's "New Day" Thursday morning.

"Mr. Jones, it is shocking to hear how vocally and unapologetically racist you are," host Alisyn Camerota began the interview. "Are you a Nazi?" she asked.

"Well, for the past 15, 20 years, I’ve not had anything to do with any national socialist organization on a formal basis," Jones replied. "I don’t call myself a Nazi. I call myself an American patriot and statesman."

Camerota went on to cite Jones' long history of Nazi affiliations, including his membership in anti-Semitic groups since the 1970s. Jones is also the former leader of the American Nazi Party, celebrates Adolph Hitler's birthday, has been seen wearing Nazi garb and routinely refers to the German program to exterminate Jews and other groups determined to be undesirable by the state as a hoax and a "international extortion racket."

When Camerota confronted Jones about his website, which is filled with, in her words, the "most vile, rancid rhetoric, I think I've ever read," he responded, "I disagree with you, it's not vile and rancid, it's the truth! . . . I can't help it if you don't want to accept the truth." Jones added, "You Jew's media, you've gone absolutely nuts."

Both the state and National Republican Parties have denounced Jones' candidacy and rhetoric, saying "The Illinois Republican Party and our country have no place for Nazis like Arthur Jones." The RNC released a similar condemning statement.

And yet, in Illinois' 3rd district, he is the only Republican running, something that will almost certainly ensure his victory in the primary and his appearance in the mid-term election. Given that the district is majority Democratic, it's highly unlikely that Jones will win the congressional seat in November. Regardless, the GOP has chosen not to run anyone else in opposition to him.

Almost equally troubling is CNN's apparent willingness to give a platform to Nazis, white supremacists and others who espouse hateful rhetoric like Jones. While Camerota doesn't let Jones just talk without challenge — as CNN has done for other hatemongers in the past — his very presence on the network serves to legitimize him as a candidate and spread his beliefs.

No one was learning anything from this conversation. Indeed, Camerota and Jones were just shouting over each other for nearly the entirety of the segment. The value of the interaction here, outside of garnering ratings, seems unclear (if not non-existent).

White supremacy and anti-Semitism will continue to exist whether CNN anchors publicly berate Nazis or not. Jones was obviously not moved or convinced by Camerota's words, and life won't get easier for the people at the receiving end of his hate because of them. The only winners here are CNN's ratings and those who support Jones. The losers are everyone else.