The strange tale of Carter Page: Republicans built a defense of Trump around this guy?

Trying to defend this untrustworthy Putin shill was an exceptionally dumb idea, even by Republican standards 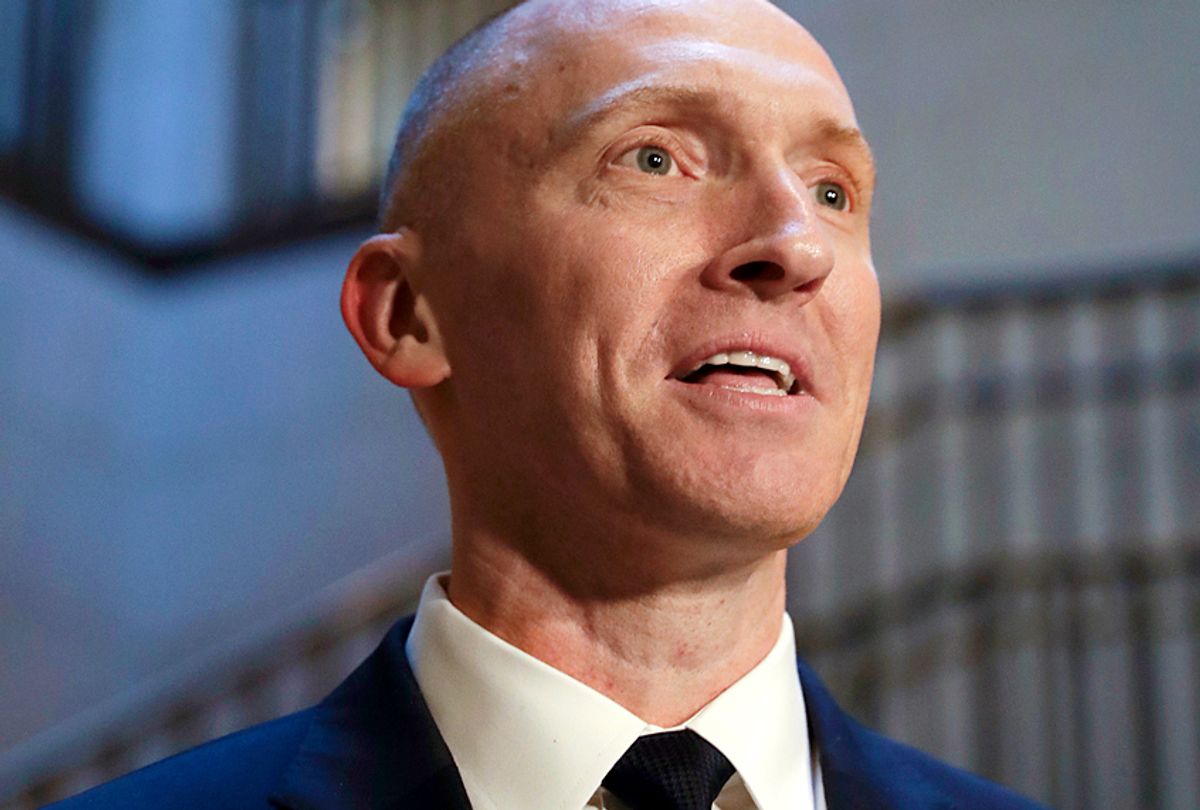 The incredible short-sightedness of the Republican decision to build a public relations strategy around onetime Donald Trump adviser Carter Page was demonstrated once again on Tuesday. Page admitted earlier this week that he had once marketed himself as an "informal adviser to the staff of the Kremlin" in a 2013 letter.

"I would say a lot of people advise, we were part of an informal group," Page told ABC News anchor George Stephanopoulos when asked about a Time report that he had boasted of close contacts with the Russian government to an academic publisher.

Page — who had become known as a shill for Russian President Vladimir Putin well before he gave a fawning speech in Moscow in July of 2016 — further undermined the case that the FBI had wrongfully spied on him when Stephanopoulos asked whether Page had spoken to Trump since he came under FBI surveillance in October 2016.

That assertion was immediately undermined when anti-Trump activist Scott Dworkin unearthed a video clip in which Page claimed to have been "in a number of meetings" with the future president during the campaign.

It's possible that Page has not spoken to Trump since shortly before the election, and indeed it's conceivable he has never directly spoken to Trump. But ultimately, we have no way of knowing on which occasion the former energy industry consultant was telling the truth. Was he lying then, or is he lying now?

Page is far from the only person who has given conflicting public statements about his relationship with the president. The Trump team itself has vacillated repeatedly about what role Page played on the future president's advisory team.

In early 2016, Trump and his campaign staff were forced to cast about desperately for warm Republican bodies they could put forward as foreign policy advisers. At that time, Trump listed Page as the second of several such counselors when he was asked to name some during a March interview with the Washington Post editorial board.

Just a few months later in September, however, the Trump team abruptly reversed itself after Yahoo News reported that Russian intelligence officials were chattering about Page's Moscow trip and his alleged meetings with members of Putin's inner circle.

"Mr. Page is not an advisor and has made no contribution to the campaign," communications director Jason Miller told The Hill after the story broke. "He's never been a part of our campaign."

That was the Trump-defender line, at least until the past few weeks. More recently, House Intelligence Committee chair Devin Nunes, R-Calif., and others have begun trying to paint Page as an important member of Team Trump who had been singled out by nefarious left-wing partisans in the amorphous "Deep State."

The attacks on law enforcement and intelligence officials have only increased after Republican members of the committee released their infamous "memo" last Friday, which some conservative media outlets have hyped as revealing a scandal "far worse than Watergate."

Aside from its obvious hypocrisy, the new spin doesn't even get the timeline straight: Page left the Trump campaign in September of 2016, but the FBI surveillance began in October. Additionally, it was Page's Moscow trek in July of that year that placed him under FBI suspicion, not a the report compiled later by former British intelligence officer Christopher Steele.

The Nunes memo also conveniently omits the fact that all four judges who approved the warrants for FBI surveillance of Page were appointed by Republicans.

The GOP report elliptically discloses that the Page surveillance was supported by other documents besides the Steele dossier, and that the Trump-Russia investigation was primarily sparked by FBI concern about George Papadopoulos, another former Trump foreign policy adviser. But only careful readers are likely to catch the critical admissions.

Page's botched ABC interview was yet another backfire in the GOP effort to use his case to discredit Justice Department special prosecutor Robert Mueller's probe of Russian involvement in the election.

For weeks, Republicans have attacked the Mueller investigation on the basis that the original FBI inquiry that preceded it was based upon the work of Christopher Steele, who was indirectly paid by Democrats. According to the GOP, when federal prosecutors went to a secret federal surveillance court to obtain authorization to monitor Page, the Steele dossier was their primary justification, something they failed to disclose to the judges:

"In the case of Carter Page, the government had at least four independent opportunities ... to accurately provide an accounting of the relevant facts," the GOP intelligence committee members wrote. "Neither the initial application in October 2016, nor any of the renewals, disclose or reference the role of the DNC, Clinton campaign, or any party/campaign in funding Steele's efforts."

The president himself has pushed this angle as well.

"The top Leadership and Investigators of the FBI and the Justice Department have politicized the sacred investigative process in favor of Democrats and against Republicans -- something which would have been unthinkable just a short time ago," Trump tweeted on Friday morning, before the White House formally declassified the GOP committee memo.

Trump followed up that line of argument in a pair of Saturday tweets,  approvingly quoting a Wall Street Journal editorial that went after the Justice Department and framed the Nunes memo as "a reckoning for the FBI."

Beyond the fact that the DOJ, FBI and other law enforcement agencies routinely used information from Republican partisans to investigate Democratic presidents Barack Obama and Bill Clinton (something Salon's Heather Digby Parton noted on Monday), the truth of the matter is that at least one of the DOJ's four approved applications to conduct surveillance of Page did include information stating that its case was partially based on information that had been paid for by a political actor.

“No thinking person who read any of these applications would come to any other conclusion but that” Steele's work had been conducted “at the behest of people with a partisan aim and that it was being done in opposition to Trump,” an anonymous federal official told the Washington Post.

Rep. Nunes, the putative author of the GOP members' memo, was asked about statements from congressional Democrats to this effect during a Monday interview with Fox News. Like Page, he was tripped up by an inconvenient fact.

"A footnote saying something may be political is a far cry from letting the American people know that the Democrats and the Hillary campaign paid for dirt," Nunes told the president's favorite show, "Fox & Friends."

It was a far cry from the indignant language Nunes and his colleagues had employed in their memorandum.

That Trump and his enablers would engage in such a shambolic campaign to promote, attack and then defend Page is unsurprising in light of their earlier characterizations of the president's relationship with Papadopoulos, a former campaign volunteer who pleaded guilty in October to lying to the FBI about his contacts with suspected Russian agents.

During his Post interview in March 2016, immediately after he had name-checked Page, Trump said he was also conferring with Papadopoulos, whom he characterized as an "excellent guy." After Papadopoulos' plea bargain was announced, however, Trump surrogates began dismissing him as a "coffee boy" and a "volunteer."

The Trump team engaged in a similar ritual with regard to former campaign chairman Paul Manafort, who was indicted on the same day that Papadopoulos' deal was revealed. According to the Associated Press, Trump began referring to Manafort as a "part-timer." White House press secretary Sarah Huckabee Sanders claimed that Manafort had only worked with the campaign for the 2016 Republican convention, even though he had actually done much more than that for Trump.

With Page acting as his own attorney, citing lyrics from the pop group Maroon 5 in official letters to the DOJ, and seeming to thrill at answering reporters' questions if it gets him on TV, his Tuesday performance may not be the only embarrassing spectacle Trump defenders witness in the coming weeks and months.

Trump's opponents are likely to witness even more absurdities as well, in light of Nunes' announced plans to unveil even more memos which he seems to think will redound to Trump's benefit. With friends like Carter Page and Devin Nunes, this president doesn't need enemies.