Why millennials are making memes about wanting to die

As a downwardly-mobile generation, Dadaist jokes about death by Tide Pod is a form of catharsis for us millennials 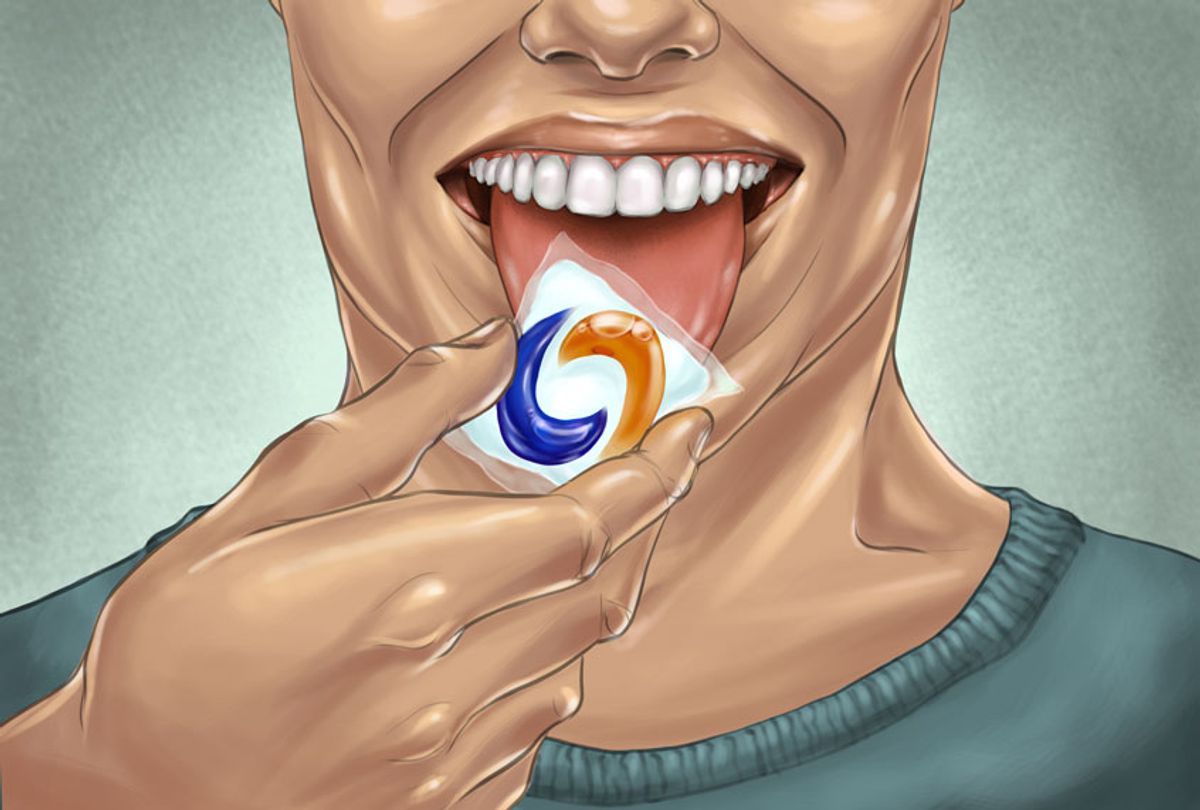 Why would anyone willingly risk their health to eat a toxic Tide laundry detergent pod? Most adults are probably baffled by a viral Internet meme that has inspired dozens of young people to ingest the colorful capsules filled with laundry detergent for internet laughs. Indeed, both the Tide brand and health professionals have urged the public not to eat the pods, as even a small amount of the detergent can cause diarrhea, vomiting, breathing issues and, at worst, death.

Yet if you were perplexed, even baffled, by the staying power of internet jokes about absurd, brand-inspired forms of suicide, there’s a simple explanation. Millennials — who were born and raised on the internet and produce and consume much of their culture there — have had our whole lives characterized by economic anxiety. We have a dismal economic outlook, the worst of any generation born since the Great Depression. And our own culture-making — this kind of nihilistic, cynical humor epitomized in memes like eating Tide Pods — is merely a reflection of our worldview. It is cathartic in a sense. And it’s not the first time in history a generation has behaved this way in response to the world they were brought up in.

Generational jokes about death via consumer goods aren't new. Before the Tide Pod meme there was the "drinking bleach" meme, a joke about committing suicide by (obviously) drinking bleach. Social media subcultures like Weird Facebook and Black Twitter share images of bleach in response to undesirable content or to self-deprecate about their mental health. Building on the Tide Pod meme, the Forbidden Snacks meme includes ingesting other household objects that resemble edible treats such as Dungeons and Dragons dice, bath bombs and Himalayan Salt Lamps, to name a few.

What makes millennial humor so nihilistic and absurdist? I think the best way to understand memes like these is to analogize them to a century-old movement: Dadaism. The Dada movement evolved in reaction to World War I and disillusionment over war, violence, capitalism and nationalism. The original Dadaists were European radical leftists who traded the reason, rationale and aestheticism of the warmongering status quo for absurdity, irrationality and anti-capitalism. They rejected conventional notions of art, in turn creating anti-art with no clear purpose that mirrored the senselessness of war.

Later, in the Cold War era, Neo-Dada arose in response to the consumer culture and mass media of the 1950s. See any parallels today?

“The Greatest Generation” suffered through the Great Depression and World War II. Having lived through scarcity and war, they did not want their children to experience the same hardships. As a result, “Baby Boomers” were raised in a world of supposed abundance and to believe they should never live without. Boomers lived during a time of significant prosperity with widespread access to resources, education and a thriving job market. Just as the dismal worldview of millennial internet memes sprang from the fount of economic anxiety, the utopianism of the 1960s counterculture sprang from their far sunnier-seeming world.

By the late 1990s, boomers had gained the greatest social, political and economic influence worldwide, and with this, a multitude of long-percolating crises reached their boiling points – climate change, national debt, and a shrinking middle class, to name a few.

Unlike boomers, millennials have taken on over a trillion dollars in student debt to obtain degrees and fight over good salaried jobs in an increasingly gig-ified economy. Millennials live with their parents longer, and are far less likely to purchase homes or vehicles, let alone marry and have children. Plagued by widespread financial insecurity, millennials have also inherited the negative externalities of boomer excess, of which climate change is the most harrowing.

Promised peace and prosperity, millennials have been delivered the opposite. With this, mass disillusionment with contemporary social, political and economic affairs reigns supreme. The nihilism and absurdity of memes that joke about dying reflect this kind of neo-Dada movement. Likewise, in television and literature, the popularity of dystopias speaks to how we see the future.

In 2011, the anonymous cartoonist known only as “Chris (Simpsons Artist)” created the Facebook page “Simpsons pictures that I gone and done.” Today, the outsider artist has over 1.3 million likes. Chris’ renowned illustrations feature absurdist, often childlike caricatures of cartoons such as “The Simpsons” and “Winnie the Pooh” that look as though they were drawn in the version of Paint that came bundled with Windows 98.  A dark, nihilistic bent undergirds many of Chris’ illustrations, like this one.

The 34-year-old illustrator has released two books and has had regular features in Front and FHM magazines. FHM has described Chris (Simpsons Artist) — as he’s known online and on Wikipedia — as the “Internet's Picasso…  he lives in Scotland somewhere, no one knows his real name, and he does slightly unnerving pictures of famous people”.

2017, the first full year of the Trump presidency, was a signal era for an emergent dark, nihilistic meme culture.  Two exemplary memes in this regard were SnapChat’s “dancing hotdog” and the so-called Emoji Sheriff. Regarding the former, the dancing hotdog involved an augmented reality filter on social media app Snapchat that let users superimpose an anthropomorphic comfort food onto real life footage of their lives.

The dancing hotdog became the star of innumerable absurd memes, and understandably: it was just bizarre and uncanny enough to appeal to millennials' Dadaist sentiments.

As for the Emoji Sheriff, it started with a few users riffing on a stick-figure emoji "sheriff" image that could be easily constructed via one's phone or keyboard and shared on Twitter. Thousands created their own renditions, be it the “sheriff of gay” or the “sheriff of fucking things up.” 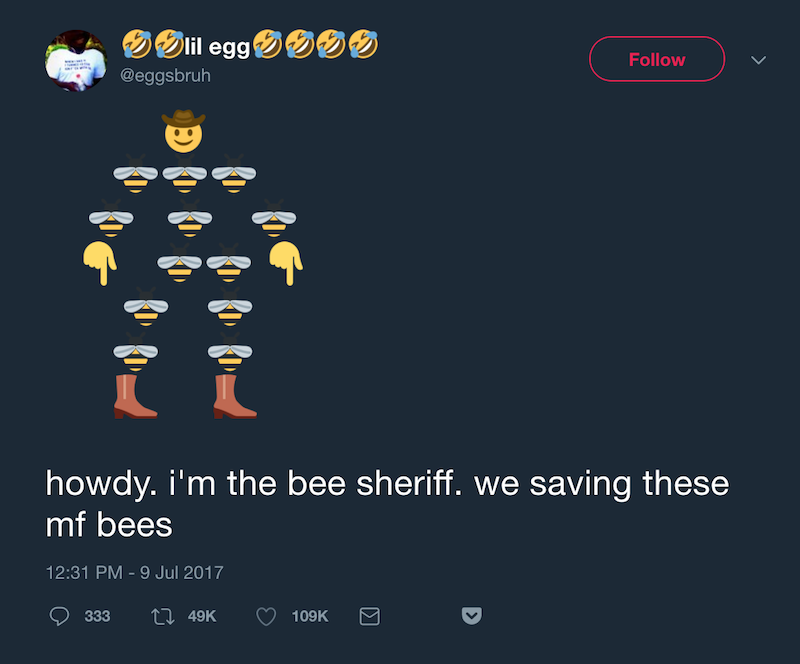 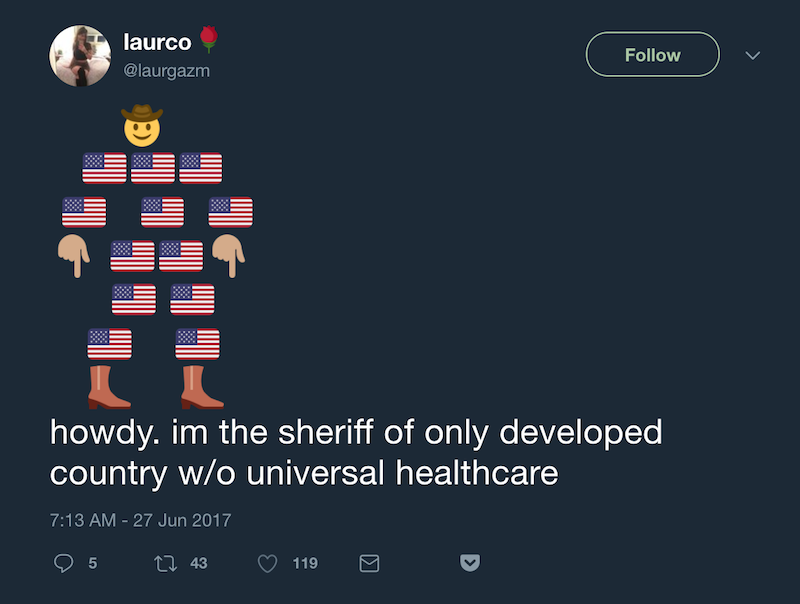 Twitter user @leyawn put it best: “the two biggest memes now are a hot dog wearing headphones and making a sheriff out of emojis. Also our planet is dying. have a good week”.

Why is our generation laughing over dancing hot dogs and sheriffs made of of emojis? In part, it is, like most social media, escapism: a way to collectively disengage from the unending horror of politics by laughing at meaningless internet jokes that mirror the nonsensical global state of affairs. Like earlier forms of Dadaism, internet memes deconstruct and scramble all coherent thought into incoherent brain goop, left open for you to take what you want from them as you will. For some, that means eating a Tide Pod.

Deidre Olsen is a Toronto-based digital marketer and writer whose work has appeared in Refinery29, New York Magazine’s The Cut, Brooklyn Magazine, Narratively, and more. Follow them on Twitter @deidrelolsen