White supremacists have killed 43 people and injured dozens more in the last four years. From the GOP: crickets 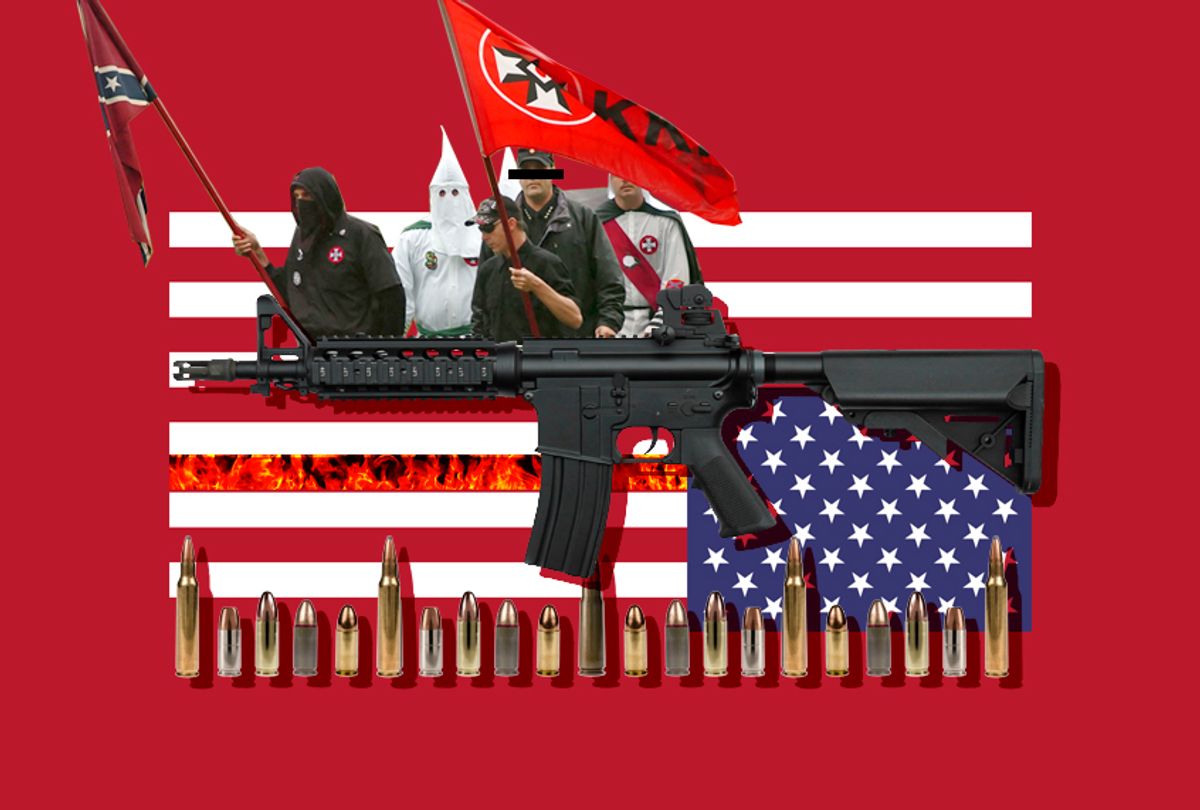 Have you heard of Blaze Bernstein? What about Buckley Kuhn-Fricker and Scott Fricker? Do Casey Jordan Marquez and Francisco Fernandez sound like familiar names?

The answer is almost certainly no. Those are a few names drawn from the list of more than 100 people murdered or injured by the white supremacist "alt-right" movement. The mainstream American news media has not devoted significant coverage to these victims. Why? Because while the rule "if it bleeds it leads" is the corporate media's informal modus operandi, right-wing violence has been increasingly normalized in the era of Donald Trump. Of course, Trump has not spoken the names of any of the 43 people killed by the "alt-right" because the perpetrators are not nebulous black or brown people -- or, worse yet, Muslims.

The Southern Poverty Law Center has been documenting the tide of right-wing terrorism and violence instigated by Trump's presidential campaign, and in a backlash against Barack Obama, the country's first black president. The SPLC's new report details that since 2014, there have been "at least 13 alt-right related fatal episodes, leaving 43 dead and more than 60 injured. . . . Nine of the 12 incidents counted here occurred in 2017 alone, making last year the most violent year for the movement."

[T]hese perpetrators were all male and, with the exception of three men, all under the age of 30 at the time they are alleged to have killed. The average age of the alt-right killers is 26. The youngest was 17. One, Alexandre Bissonnette, is Canadian, but the rest are American. While some certainly displayed signs of mental illness, all share a history of consuming and/or participating in the type of far-right ecosystem that defines the alt-right.

The "alt-right" is the tip of the spear, and a distillation of the social pathologies and broken civic culture that elected Donald Trump. In essence, the "alt-right" provides the shock troops, and arguably the ideological vanguard, for Trump's and the Republican Party's white identity movement.

What do we know about white supremacists and other members of the so-called "alt-right" movement? A recent working paper titled, "A Psychological Profile of the Alt-Right" by psychologists Patrick Forscher and Nour Kteily offers some preliminary answers.

Swedish documentary filmmaker Patrik Hermansson infiltrated "alt-right" organizations in both the U.S. and the United Kingdom. During his year undercover, he learned a great deal about their values, beliefs and organizing strategies. Hermansson told the Guardian that he recorded people "who wanted to deport Jews and Muslims and who talked of murdering leftwing opponents, and . . . who boasted of direct links to the Trump administration."

A common question I get is: “Aren’t they just doing this for fun?” particularly given the strong online and trolling presence. The answer is no. Jokes and irony are an important aspect of the online spheres where the “alternative right” mobilises but it cloaks an effective means of radicalising young people and getting the message out. Behind the irony and trolling are much more sinister ideas.

Hermansson also warned of the numbing effect of "alt-right" ideology, writing that the group's "extreme views started to feel almost normal" after months spent in their community:

I became desensitised and started to lose perspective of how absurd their ideology was. Ideas that I once reacted viscerally to I could listen to for hours without raising an eyebrow.

Allowing these hateful ideas to go unchallenged normalizes them. It brings about a creeping acceptance: even if you’re fundamentally against these notions you learn to live with them. Indeed, I was told that this is an explicit strategy by some of the leaders of these groups.

As demonstrated by the SPLC report and other research, the values of the "alt-right" offer a magnified mirror-image of the social anxieties and fears of the white voters who support Donald Trump and the current Republican Party. Trumpism is a toxic mix of social-dominance behavior, racial authoritarianism, misogyny, nativism, violence, white supremacy and a hostility towards an increasingly pluralistic and cosmopolitan world. This is why Trump, his party and their captive media will never forcefully condemn white supremacists or take substantive action against them. To reject white identity politics would be to tear the beating heart out of today's conservative movement.