To watch on Valentine's Day: 9 offbeat movies about love and sex

A little naughty, a little weird: Salon's recommended viewing for people who love too much — or too little 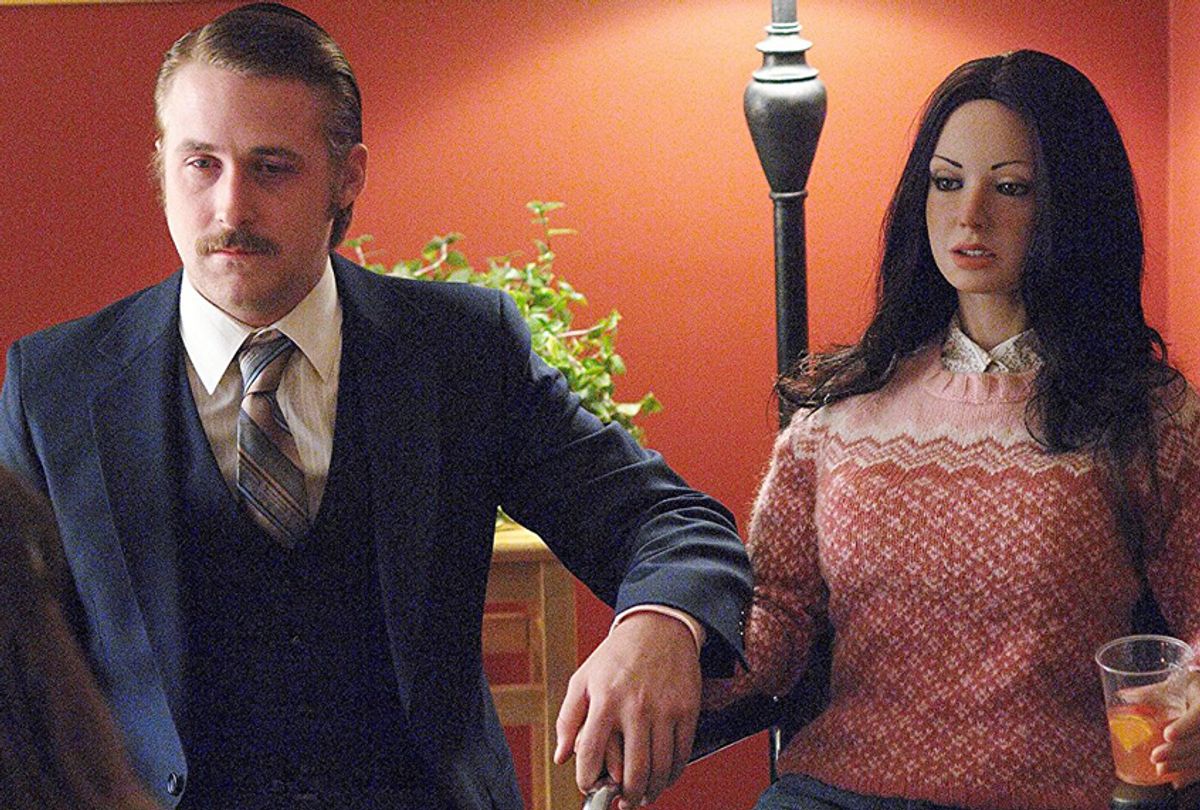 "Lars and the Real Girl" (Metro-Goldwyn-Mayer)
--

To quote “Addicted to Love” by Robert Palmer, “Whoa, you like to think that you're immune to the stuff, oh yeah / It's closer to the truth to say you can't get enough.”

Sex addictions can cause folks no end of trouble as they look for love in all the wrong places. Just watch what happens to the character played by Diane Keaton in “Looking for Mr. Goodbar.”

And lonely-heart films often feature characters that find love only after they learn to love themselves.

So, for Valentine’s Day, here are nine films about people who love too much or too little.

As one character in this frisky 2011 comedy observes about an orgy, “You can’t force it, and you can’t fake it.” Eric (Jason Sudeikis) invites his friends to come over and shed their clothes and their inhibitions at his Hamptons beach house. While Sue (Michelle Borth) is excited — she dated Eric briefly years ago, and not so secretly wants to sleep with him — others in the group are reluctant. Alison (Lake Bell) thinks Eric has intimacy issues. His desires, both sexual and otherwise, are complicated by his budding romance with Kelly (Leslie Bibb), a realtor. While the film is candid without being too explicit — a “research” scene at a swinger-like evening may be the film’s naughtiest sequence — there are some amusing moments, such as an embarrassing fight about pubic hair.

Seven sexy Brits on a boat take some E and start having intense orgiastic sex. However, when a character dies during the act — which, yikes! was being recorded — things get even more complicated and uncomfortable. The sex scenes are hot; the violence is gory as the body count rises. The pleasure of “Donkey Punch” is less about considering who is morally right and if they deserve to survive than it is watching good-looking people screwing with abandon and behaving very, very badly.

4. “Sexual Chronicles of a French Family”

Don (writer/director Joseph Gordon-Levitt) cares about his porn so much he says it’s better than sex with a real person. And viewers will laugh at — if not agree with — his reasoning for this, which is amusingly explained. “Don Jon” (2013) shows how its title character gets into a bit of romantic trouble when he falls for Barbara (Scarlett Johansson), a gum-chewing Jersey girl, only to lose her after she catches him naked and pleasuring himself at his computer. As Don slowly develops a friendship with Esther (Julianne Moore), a sad and needy classmate he meets in the night school, this rom-com shifts from funny to tender. Esther teaches Jon life lessons about emotion and connecting to people. A post-coital scene they have in a car, sharing a joint, is perhaps the film’s most honest and real moment in a coming-of-age film full of wisdom, humor and heart.

Steve McQueen’s 2011 drama has the handsome Brandon (Michael Fassbender) having way too much unhappy sex, sometimes with multiple partners. Fassbender famously walks naked through his apartment to show how well-endowed Brandon is. But the film's best scene is one in which his lack of emotional intimacy comes to light: an uncomfortable dinner with a co-worker, Marianne (Nicole Beharie). Brandon may debase himself in an effort to feel something, but whether audiences do will depend on whether the sexy — if skin-deep — “Shame” heats them up or leaves them cold.

This 2014 screen adaptation of erotic romance writer Zane’s novel has Zoe (Sharon Leal), meeting with Dr. Marcella Spencer (Tasha Smith) to claim her life back from her sex addiction. Because Zoe can’t get enough sex from her hunky husband (Boris Kodjoe), she began an affair with Quinton (William Levy), a dreamy artist. Zoe is so insatiable she cheats on Quinton with a second lover, Corey (Tyson Beckford). Soon, she can’t control herself, and her addiction causes her to destroy her family and her business. Dr. Spencer counsels Zoe thusly, “The first time you’re with a lover outside your marriage is like your first hit of heroin.” There are risible moments in “Addicted” before Zoe reveals the trauma from her past that causes her condition. But the film also offers plenty of naughtiness — such as a scene at a S&M club — and naked-man eye candy.

In this quirky, deadpan, romantic comedy-drama, Lars (Ryan Gosling) is a 27-year-old man-child with intimacy issues. He doesn’t like being hugged or touched and he rejects his sister-in-law Karen’s (Emily Mortimer) offers to socialize. When he mail-orders an anatomically correct doll, Bianca, and passes her off as his girlfriend, his delusions come to light. On the advice of Dr. Dagmar (Patricia Clarkson), Karen, her husband Gus (Paul Schneider) and the rest of the town are encouraged to “go along with” Lars’ fantasy while she puzzles out the root of his anxiety. Of course, what transpires is that everyone finds unique ways of expressing love. “Lars and the Real Girl” may seem a bit precious, especially to cynics, but it is a lovely fable for the loveless.

Yorgis Lanthimos’ 2015 scathing, absurdist black comedy forces its single characters to find true love in 45 days or be turned into an animal of their choosing. David (Colin Farrell) learns it is not easy to fake love, especially after the Heartless Woman (Angeliki Papoulia) does some unspeakably mean things to break his façade. “The Lobster” shifts gears in its second act, forcing David out into The Woods, where he meets the Short Sighted Woman (Rachel Weisz). As he develops real feelings for her, he is challenged anew. Lanthimos shrewdly comments on how we compromise our lives for happiness, and how society pressures us to couple up, or be outcasts. It’s a grim message, written in acid. Happy Valentine's Day!