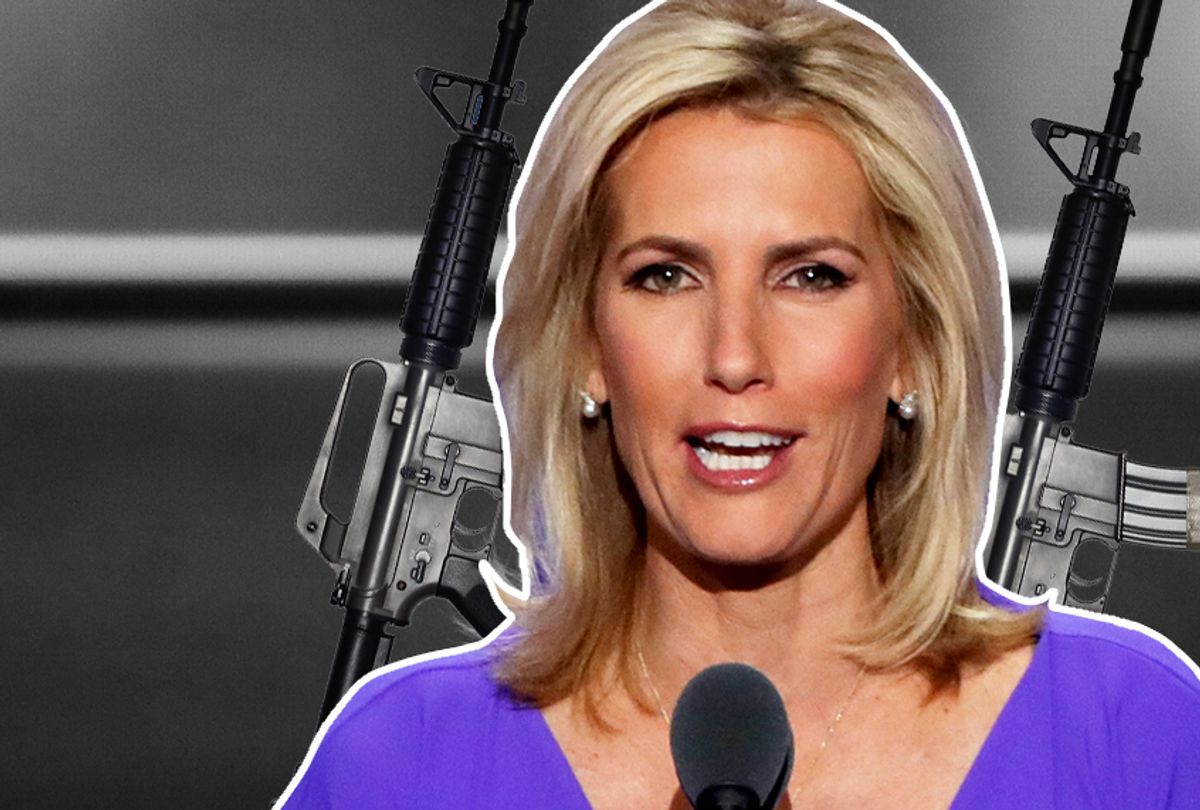 Hours after a gunman sprayed Marjory Stoneman Douglas High School with bullets, killing 17 people and injuring at least a dozen others, Fox News host Laura Ingram defended the AR-15 semiautomatic rifle as "safe." The weapon was used in the school shooting Wednesday, in the 2012 Sandy Hook shooting and in the horrific attack at a music festival in Las Vegas last year, as well as in many other massacres.

Ingram began the segment about the "popular" rifle by airing a monologue from Sen. Chris Murphy (D-Conn.) where he reminded lawmakers in the Senate, that "this happens nowhere else other than the United States of America," adding that school shooting after school shooting "is a consequence of our inaction. We are responsible."

"Didn't take him long to get right to gun control," Ingram said, clearly unmoved. "Is this a problem with the gun or the shooter? Let's look at the AR-15 and what makes it so popular and overwhelmingly, what makes it so safe." Right before she aired Murphy's speech, Ingram herself listed off the many mass shootings in which the AR-15 was the shooter's weapon of choice.

Before Ingram turned the question to her guest Aaron Cohen, described as a security and terror expert, she veered off into a monologue of her own. "I fired it many times, my family owned a lot of guns, I shot guns since I was, I don't know, six years old. But it's like all weapons, it's very dangerous in the hands of the wrong person," she said.

Cohen said that Murphy isn't "really qualified" to asses the gun's safety or risk. "This is a security issue," he said, "It's not a weapon issue. That kid has parents. Where's the parents?" The shooting in Parkland, Florida Wednesday marked the 18th school shooting in 2018, so far.

"There is a mental health epidemic here, which is being confused for a gun problem," Cohen continued. "I don't want that to sound political, but it's the truth." According to the Daily Beast, the Florida shooting suspect, Nikolas Cruz, was a member of a "white separatist paramilitary proto-fascist organization," the group said, adding that he engaged in paramilitary training with the Republic of Florida, an organization that seeks a "white ethnostate" in Florida. Several students told the Daily Beast that Cruz wore "Make America Great Again" hats to school.