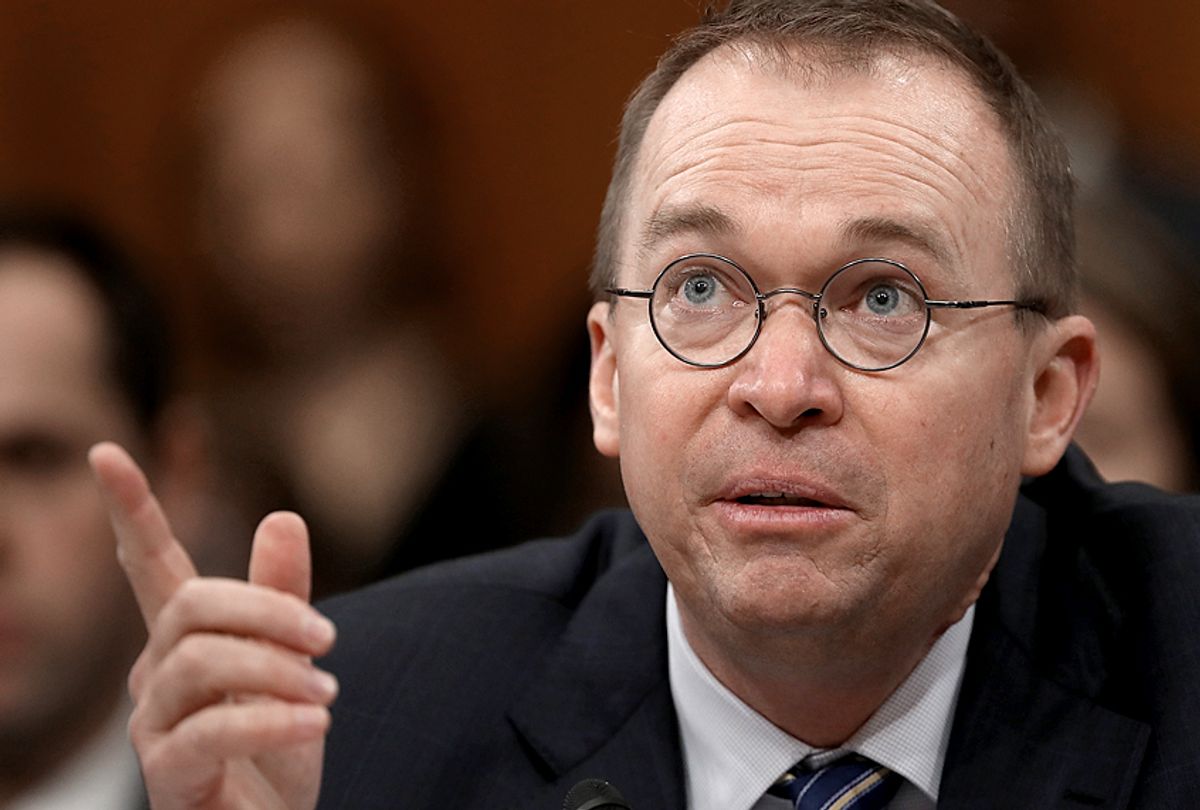 Mick Mulvaney warned us that it was coming. After all, in 2014 he called the Consumer Financial Protection Bureau, the independent government agency he now temporarily heads, a "sick, sad joke."

Three years later, Mulvaney was installed as the head of the agency he once decried — a move that smelled like a hostile takeover by the the powerful financial institutions that are now running the show. It appeared calculated, and unmistakably placed Mulvaney at direct odds with the very purpose of the agency: to protect the consumer.

It certainly fits the broader theme of the Trump administration.

A few months prior, during a visit to CPAC — the pinnacle for conservatives in Washington — then-Trump aide Steve Bannon said that the administration's goal was "the destruction of the administrative state."

"Since he [Mulvaney] has taken this role on," Ruth Susswein, the deputy director of National Priorities at Consumer Action, a nonprofit consumer advocacy group, told Salon, "he has actively chosen to do whatever is in his power to dismantle the agency from within. That's his goal."

She explained that Mulvaney would "abolish the agency if he could, but legally he can't." In the past, as a former Republican U.S. representative, Mulvaney co-sponsored legislation that would eliminate the agency.

As the acting brass, Mulvaney has taken several drastic steps to reduce the CFPB's authority and ability to hold powerful financial institutions, such as banks, payday lenders and credit card companies, accountable for fraudulent or otherwise predatory behavior. He has put on hold a rule that imposed restrictions on short-term payday loans, and dropped investigations into at least one company that donated to his political campaign in the past.

When he was appointed to the position in a controversial move by President Donald Trump, the memo from the Office of Legal Counsel was even penned by a former lead counsel of a payday lender that has been entangled in legal battles with the CFPB.

Days after taking over, Mulvaney explicitly said his job is to "limit, as much as we can, what the CFPB does to sort of interfere with capitalism and with financial service markets." Missing from his statement was that crony and vulture capitalism was the embodiment of what his agency was supposed to fight against. Most recently, he ended the investigation into Equifax, the credit rating firm from which 143 million people's records had been breached, and didn't request a single penny in funding for the bureau for the upcoming quarter.

"Is this the caretaker of an agency?" Susswein asked. "Or is this someone who has decided to bomb it?"

"Mulvaney has said, and of course his boss Trump would agree, that elections make a difference," she added. "So everyone has to stand up and take notice; he's making a difference in harmful and more subtle ways than we're accustomed to."

Of course, Mulvaney's undermining of the CFPB has potentially grave consequences, and sends a direct message to powerful financial institutions that they can once again fearlessly get away with predatory practices that harm so many and benefit so few.

"We're a very divided nation right now about a lot of things," former U.S. congressman Brad Miller, D-N.C., told Salon. "But half of Americans think that the country is not being run for ordinary Americans, for most Americans; [they believe] it is being run for a tiny elite."

He added, "The people who benefit from these practices are that tiny elite. It is obviously contrary to the interests of ordinary Americans."

As a lawmaker, Miller served on the House Financial Services Committee, and was one of the few leading congressional voices for meaningful consumer finance reform.

"For all the talk of wealth equality and income inequality, a lot of what needs to be fixed — a lot of the reforms we need to make — is what happens to Americans after they get paid, and consumer finance is just shot through with predation."

Under the Obama administration, the CFPB acted aggressively and enacted meaningful reforms. It's certainly worth arguing that the CFPB could have gone -- and should continue to go -- even further, but it was, at the very least, still carrying out its intended role.

The Los Angeles Times elaborated on that role in a recent editorial:

The bureau was active and aggressive under its initial director, former Ohio Atty. Gen. Richard Cordray. In addition to ramping up enforcement actions for lending discrimination and unfair terms, the bureau issued the federal government's first-ever regulations for payday lenders, proposed rules for prepaid credit cards and issued guidelines to combat discrimination in automobile loan terms, among other steps.

The CFPB was created out of the Dodd-Frank Act, which was put in place to help reel in Wall Street's immense power and recklessness, which caused the subprime mortgage crisis in 2007. But that progress, and future progress, could stand to be erased if Mulvaney continues to turn back the clock.

"I think we'll be right back to where we were in 2007 and 2008," Miller said. "Where it's open season on consumers. Where anything you sign may have hidden in the tiny little print . . . provisions that just screw you blind."

He noted, "That was true of credit cards. It was true of mortgages, and it will be true again. It's never really stopped being true; consumer finance has continued to be a problem."

"What the Trump administration is going to do, and Mulvaney is going to do, is strip away all the protections that were intended to keep that [a major financial crash] from happening again," Miller explained. Recent polls have shown that the public does care about these issues, wants to see reform and largely understands that the system is gamed against them. "But the consumers aren't the ones coming to the PAC parties on Capitol Hill," Miller said.

Under the Trump administration, Mulvaney's actions have fit the norm. The irony is that Trump ran an entire presidential campaign pretending to be a champion for the American worker.

"This is a sickening example of what Donald Trump's vision for America really is," Andrew Bates, the deputy communications director at American Bridge, told Salon. "At Trump's direction, Mick Mulvaney is crippling the watchdog agency created after 2008 to stand up against fraud and other abuses that ruin lives, drive innocent families into bankruptcy, and helped cause the financial crisis in the first place."

"Credit card companies and predatory lenders are celebrating while the middle class is being sold out," he wrote in a statement.

Parallels for what is being done to the CFPB can be drawn to nearly any other government agency. Trump has chosen to stack agencies with sycophantic insiders who have turned them upside down in order contradict their intended purposes. Whether it's the Environmental Protection Agency, the Federal Communications Commission, the Department of Education or others, the mission has been the same.

"In this particular case, this is the Consumer Financial Protection Bureau," Susswein told Salon. "There are lots of other regulators that have been, and are, hyper-focused on corporate sustainability and profitability — and that's OK — but this is the one regulator that was created because consumers were an afterthought at every other agency."