Up close and personal with Matthew Heineman, director of "The Trade" 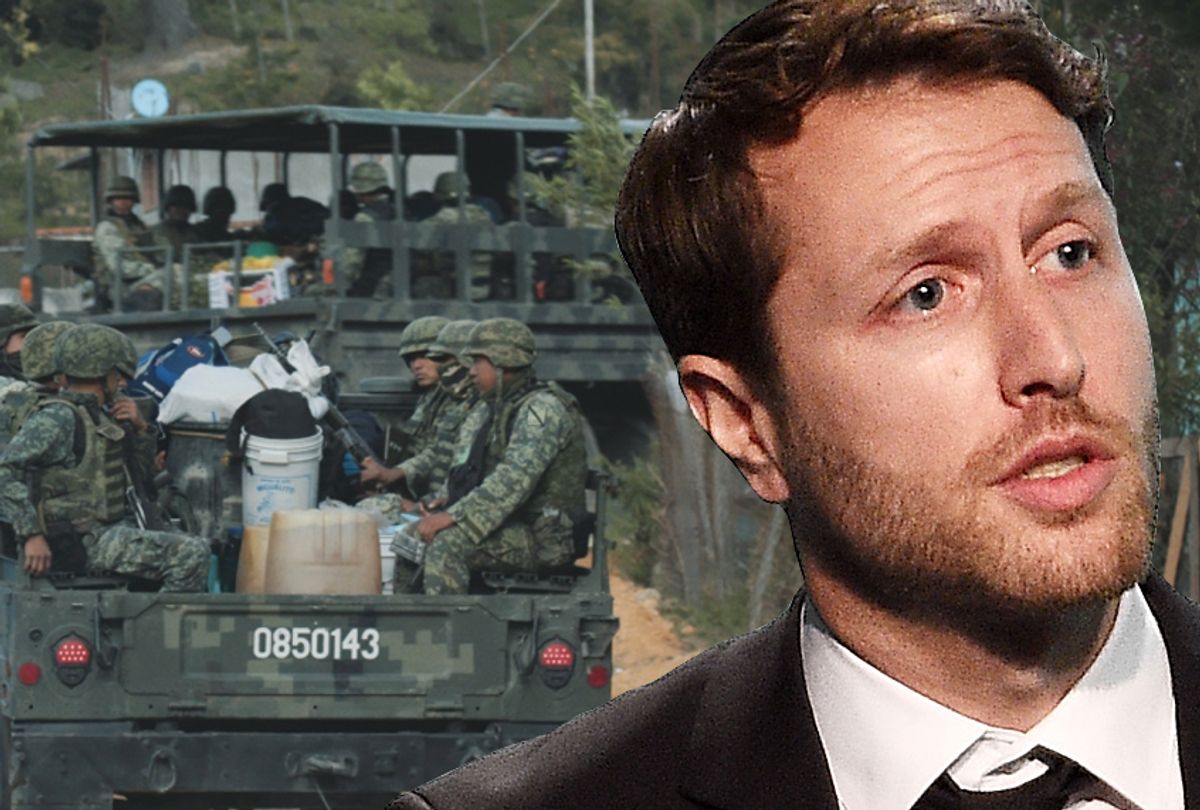 Frequently while watching “The Trade,” Matthew Heineman’s series follow-up to his 2015 Oscar nominated feature documentary “Cartel Land,” the mortal danger into which the filmmaker and his crew insert themselves becomes almost too much to ignore. You may feel it as the crew accompanies cartel enforcers armed with automatic weapons, as they hunt a gang that ambushed two of their men and shot them in their faces.

It may strike you as the camera captures a cold-blooded strongman bragging about butchering innocents, saying, “the heroin that we send to the United States is the best there is. It makes you feel like Superman. It gives you happiness that your family can’t.”

But this feeling also caves in on you in the quieter moments, such as in the third episode when John, a kindly addict in Atlanta, blankly memorializes a fellow addict by writing his name on the door frame of an abandoned building where he’s squatting. John is a slave to the stuff the man on the Mexican border boasts of, so hooked that he can’t help but lie to the family members supporting him, who are at a loss as to how to keep him as safe as possible.

“When you get this intimate, when you get this level of access, there are often many uncomfortable moments, especially with the addicts who are in such a vulnerable state. That’s why it's so important to develop that trust and develop that relationship so they don't feel like they're being exploited,” Heineman said in a recent phone interview with Salon.

“The Trade,” airing at 9 p.m. on Fridays, examines the horrifying flood and toll of the opioid crisis tearing through the United States, trekking alongside law enforcement officials, mules, soldiers and bosses as it traces the path of heroin from poppy fields in the Mexican countryside to syringes in America’s cities and suburbs.

The extreme closeness of Heineman’s work is his calling card, and as anxiety-provoking and crazy as it looks, when he and his fellow producers insert themselves into these very different lives and situations, it serves to humanize the opioid epidemic in ways headline news cannot.

But when asked about how he’s able to coax interviews out of dangerous thugs with little regard for human life and walk away unscathed, Heineman simply credits the extensive contacts he and his team have cultivated over the years.

“The Trade” debuted on Showtime shortly after Heineman garnered critical acclaim for his theatrical feature, “City of Ghosts,” which made the Oscar shortlist for a documentary feature nomination. That film centers on a group of citizen journalists known as Raqqa Is Being Slaughtered Silently (RBSS), who risked death to report on atrocities committed by ISIS. And in that work, as well as “The Trade,” Heineman does not shy away from showing disturbing images.

His reason for showing such horrors in their unvarnished state is to make these predicaments feel palpable in ways mainstream news cannot.

“My job and my goal with this series was to really humanize the issue, to allow you to have a visceral, experiential journey into the lives that are affected, that are trapped in this horrible cycle of addiction, this horrible disease,” Heineman said. “To allow people that might not necessarily engage with the topic to have an entry point and a way to empathize and understand what is happening.”

While the debut of “The Trade” may feel timely, Heineman chalks that up not to any sense of prescience but to simply going where the stories are.

“This opioid epidemic is not going anywhere anytime soon. That’s the sad reality,” he said. “But we’re not breaking any news stories by making ‘The Trade.’ You're not going to walk out of watching the series with some sort of nugget that no one else in the world knows.”

Heineman added that documentaries are the best way to cover sprawling stories like this. “As traditional media is obviously being disrupted, as there's less money invested in long form investigative journalism, as foreign bureaus are shrinking or being eliminated, I think we are going to rely more and more on documentary filmmakers and citizen journalists to shine light in dark corners of the world.”