Why the Internet of Things is designed for corporations, not consumers

A logistical and privacy headache, a universe of “smart” devices may be a bad idea 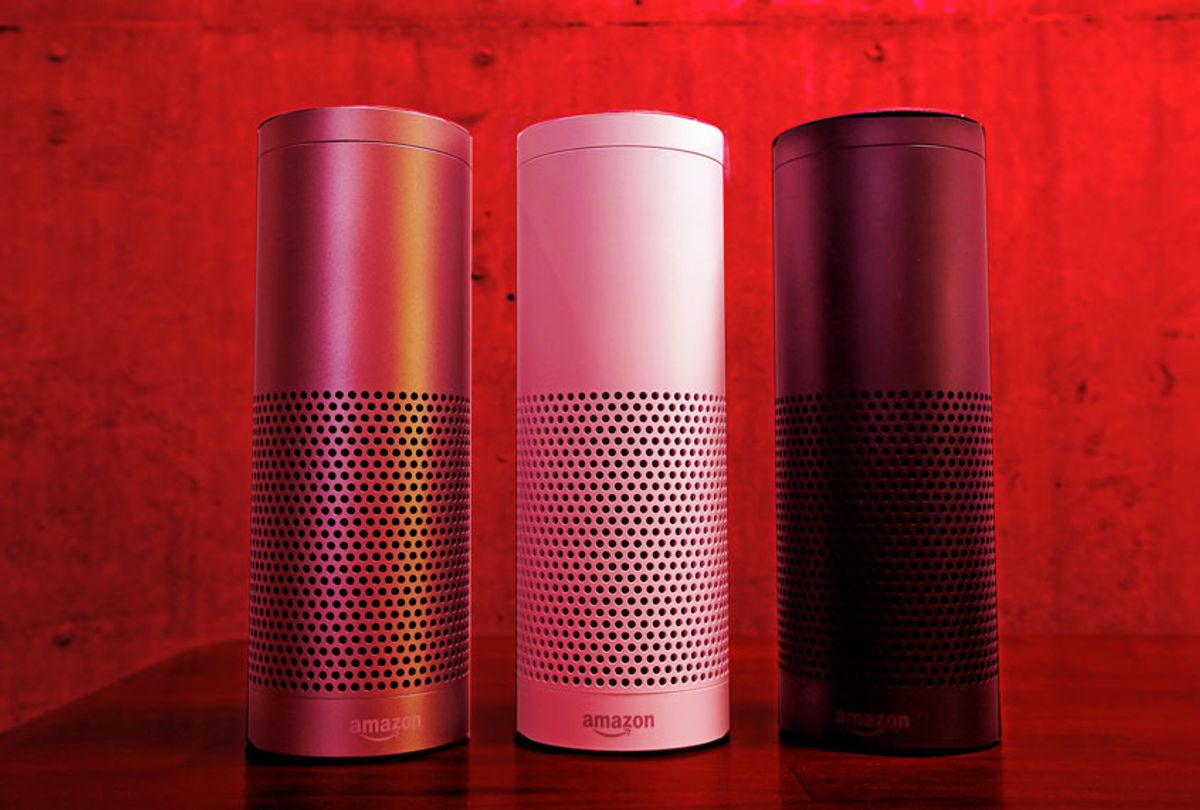 "Sometimes I suspect that we build our traps ourselves, then we back into them, pretending amazement all the while. Tools, of course, can be the subtlest of traps." —Neil Gaiman

In 1966, German computer scientist Karl Steinbuch said that “in a few decades time, computers will be interwoven into almost every industrial product.”

Today, the internet mostly exists on laptops and smartphones. But it’s only a matter of time before the internet starts talking to every possible consumer object. If an item can be connected to the Net, it will be. This concept is broadly known as the “Internet of Things,” or IoT — and it includes a wide range of consumer devices spanning the gamut from “smart” home devices like the Amazon Echo and Google Home all the way to internet-connected lightbulbs, toothbrushes and juicers — anything in which you can cram a WiFi chip. Indeed, the IoT "represents a vision in which the Internet extends into the real world embracing everyday objects," as computer science scholars Friedemann Mattern and Christian Floerkemeier write.

According to engineer Jean-Baptiste Waldner, the IoT "at maturity" will eventually include 50-100 trillion code-bearing objects. Every month sees a new wave of Internet-connected devices: real-world objects imbued with sensors and WiFi connections. Unconventional objects will soon be yoked to the web: not just Fitbits and televisions, but toys and kitchen implements, lights and ovens, shoes and lamps.

Let me drive this home: The way that consumer goods are evolving, any implement that can be connected back to the Net will be. Think of a world where the physical location of every single item is logged and known at every single moment. Imagine what that would look like on a three-dimensional grid; it would bring an engineer to religion. A wise man once said that not a sparrow falls without God knowing it. However, in a world where the Net keeps simultaneous watch on a thousand million spinning plates, the Lord will have a peer.

This vision, of trillions of correlated real-world data points, is astounding. But that’s just the beginning. Separate sensors could be tied together to create a holistic picture. Your brain is doing sensor fusion right now, by combing the vision input of two eyeballs into stereoscopic sight. Remember that scene in "The Dark Knight" where Morgan Freeman discovers Batman's creepy spy-computer and rightly freaks out? That is nothing compared to what is coming. In the brave new world of snitch tools, your WiFi-connected bong will be given a vote on just how much of a dirtbag you are.

A fully realized IoT will know more about you than you know about yourself. You will have a digital twin secreted away in cyberspace: a creature with all your anthropometric numbers and your personality quirks and browsing history. Like if a company owned an exact wax replica of you, and hid it in a dark basement somewhere. Every single action point in your physical existence has a river of data streaming from it.

IoT will be able to take stock of your choices, moods, preferences and tastes, the same way Google Search does. With enough spreadsheets, many practical questions are rendered trivial. How hard will it be for the IoT — maybe through Alexa, maybe through your phone — to statistically study why, where and when you raise your voice at your child? If you can correlate people’s habits and physical attributes, it will be toddler-easy to correlate mood to environment. The digitally connected devices of tomorrow would be poor consumer products if they did not learn you well. Being a good and faithful servant means monitoring the master closely, and that is what IoT devices will do. They will analyze your feedback and automate their responses — and predict your needs. In the IoT, Big Data is weaponized, and can peer deeper into the seeds of your life than the government has ever dreamed.

We currently participate in the Internet of People. In any technological web, humans are the coal that makes the train roll. In other words, engines do not run themselves; the internet is mostly pointless (and unprofitable) without having people there to use it. The infrastructure of the Net was born in October 1969. The World Wide Web premiered in 1991. But the internet only truly became itself in September 1993, when America Online gave Usenet access to millions of baffled casuals. The sluice gates opened, and soon everybody's parole-dodging uncle could post Illuminati theories any hour of the day. The first blog appeared in January, four months later. Nine months after that (Oct. 27, 1994) the first banner ad went up. The internet was there, waiting for its guests. See, service providers can stock up on all the wires they want — and have — but there’s no real online without the horde of sharing, commenting, picture-snapping, kvetching, Twitch-streaming users.

To the extent that the Internet of People contains surveillance apparatuses, it is dominated by users sneaking on other users. The NSA and other governments spy on us, but the majority of the voyeuring is done by ordinary users. It’s a matter of numbers; there are still more ordinary people than spies in the world. The futurist Jamais Cascio labeled this phenomenon the "participatory panopticon," way back in 2005. Cascio argued Orwell was wrong; there wouldn't be a Big Brother:

Such monitoring may well exist, probably will, in fact, but it will be overwhelmed by the millions of cameras and recorders in the hands of millions of Little Brothers and Little Sisters. We will carry with us the tools of our own transparency, and many, perhaps most, will do so willingly, even happily. I call this world the Participatory Panopticon. The Panopticon was Jeremy Bentham's 18th century model for a prison in which all inmates could be watched at all times. ... This notion of individual citizens keeping a technological eye on the people in charge is referred to as "sousveillance," a recent neologism meaning "watching from below" -- in comparison to "surveillance," meaning "watching from above."

We already have watching-from-above, and the panopticon gives us watching-from-below ... but the IoT promises to watch us from all around. The internet pioneer Bruce Schneier told Congress the following:

... the chairman pointed out, there are now computers in everything. But I want to suggest another way of thinking about it in that everything is now a computer: This is not a phone. It’s a computer that makes phone calls. A refrigerator is a computer that keeps things cold. An ATM machine is a computer with money inside. ... It was OK when it was fun and games. But already there’s stuff on this device that monitors my medical condition, controls my thermostat, talks to my car: I just crossed four regulatory agencies, and it’s not even 11 o’clock. This is something that we’re going to need to do something new about.

Watching you watching me

Must the IoT necessarily create nightmares? What if we program our devices to only learn about our superficial needs? A Thingternet that focuses on convenience, not deep knowledge, could vastly increase the comfort of human life. Would it really be so bad for your vehicle to learn your preferences, and to start up while you're eating breakfast?

Big Data is not in itself oppressive. Pankaj Mehta notes that nothing separates Big Data from small data but the dimensions, "the scale and scope of what’s being gathered and analyzed, often summarized by the ‘3 Vs’: volume, variety, and velocity," gathered in more than 3 million global data centers. Now, data (like technology) is an artifact of power. But that same power can be turned to wholesome ends. The sequencing of DNA data, or correlating of the effectiveness of certain unusual medical treatments, hinges on the mining of information-mountains.

These wonders won’t happen unless we question our assumptions. Which ones? As Ian Bogost wrote in 2015, the IoT has an undeserved reputation for efficiency and facility. Right now, the IoT is merely "the process of enclosing ordinary life within computational casings." Rather than make life easier, the Internet of Things makes “life more computational." Bogost describes this as the “colonization of formerly non-computational devices for no other reason than to bring them into the fold of computation." It’s as if a guru with a TED Talk mic declared that your future happiness depended on gluing metal gears onto every material object. "Steampunk makeovers will make everything go faster. Don’t ask me how.”

Not every device needs an IP address, or a CPU. Unnecessary computers mean unnecessary complexity and higher chances for breakdown. In the Nineties, we were wooed by various thrilling tales of tomorrow. I was promised that future TVs would have 500 channels and any movie on demand. Flash forward 20 years. Nowadays, if you buy a flat-screen TV, you’ll get your precious channels, but only if you spend a considerable amount of time navigating the walled gardens of streaming services.

Suppose Bogost is correct. Let’s extend his theory to its logical conclusion. There is an inevitable endpoint to the IoT. The user will become the final device of the Internet of Things. Eventually we too will be brought into "the fold of computation." The user, the ordinary human being, will become a Thing of the Internet in the IoT: plugged in, located and measured. Ordinary human beings will be legibly read inside a bounded tabernacle of zeroes and ones, like a genie clasped tight in a bottle. Fitbits, Apple Watches and Google Glass presage this future of obsessive self-collection of our own data.

In 1969, the brilliant sci-fi nightmarist Brian Aldiss wrote a dystopian short story titled "Supertoys Last All Summer Long." In his tale, humans, aching from loneliness, have synthetic A.I. children to help them get through their day. Aldiss has his human character Henry tell a crowd: “There have been mechanicals on the market with mini-computers for brains — plastic things without life, super-toys — but we have at last found a way to link computer circuitry with synthetic flesh.” Supertoys we have, and supertoys we may become — let us hope our time lasts longer than a season.