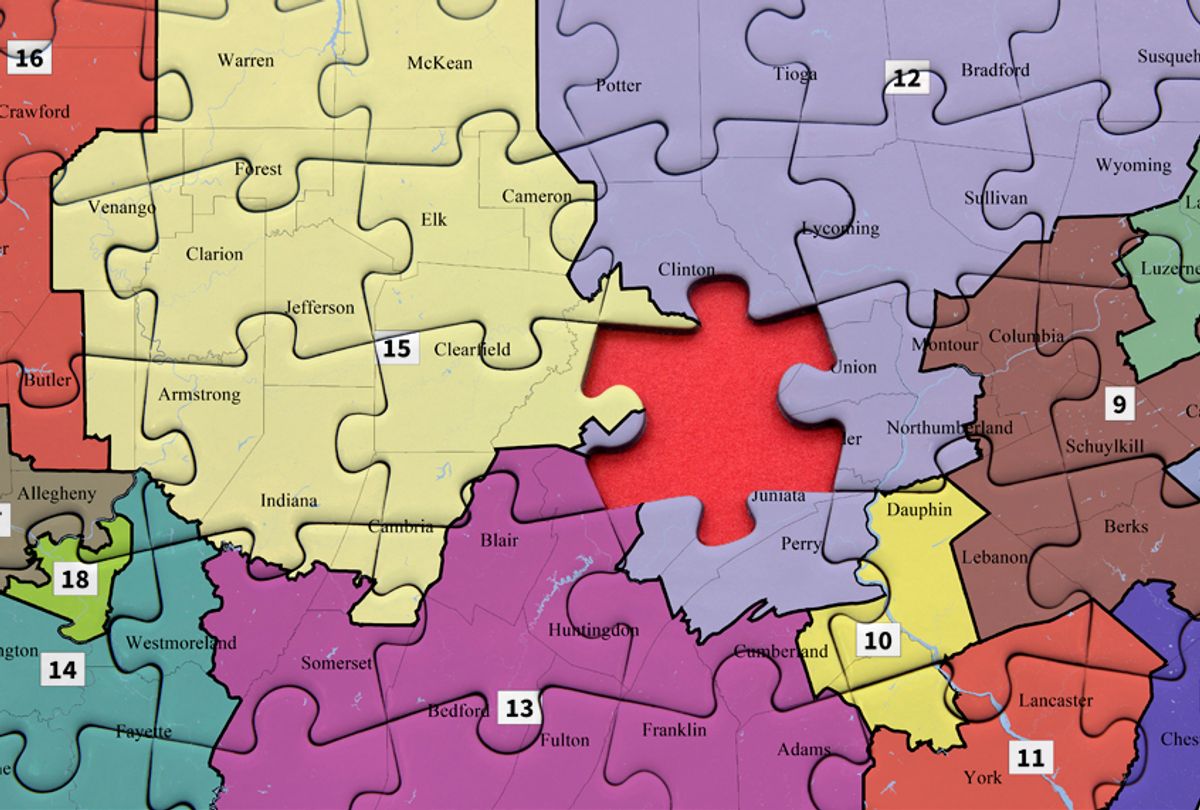 Pennsylvania is facing a new frontier. The Pennsylvania GOP's years-long gerrymandering effort was terminated by the state's supreme court, who ruled that the tilted map must be redrawn. In the wake of the news, Salon spoke to David Daley — author of "Ratf**ked: Why Your Vote Doesn't Count," a senior fellow at FairVote, and the former editor-in-chief of Salon — to discuss what this news means going forward.

The following interview has been condensed for clarity.

What does the Pennsylvania ruling mean going forward?

The new maps immediately create something between three and five newly-competitive districts that Democrats could potentially win if there is a blue wave this year. And that's a pretty significant amount of the 24 seats that they need to take control of the House. So this is a hugely consequential development for Democrats for the 2018 midterms. It certainly puts the House in closer reach than I think it had been even before.

What we have learned especially last year in Virginia — where Democratic candidates won something like 25,000 more votes than Republicans, but the GOP kept their 51-49 edge — is that a blue wave has not always been enough agains the red sea wall of these maps and these extra competitive districts in state that should be competitive will be very meaningful.

Does this ruling affect how parties view gerrymandering?

It has been really interesting to watch the reaction to this. On one hand you have Republicans in Pennsylvania and President Donald Trump encouraging a challenge to these maps, potentially all the way back to the U.S. Supreme Court. So it certainly shows us that the gerrymander that the Republicans instituted in so many swing states in 2011 is so meaningful to the party that they are willing to fight for it and be really aggressive and finish this wave.

In the one state the Democrats had the capacity to gerrymander in 2011 — in Maryland — they used the same technology and the same sophisticated computer mapping and big data to draw themselves to a 7-1 advantage in the congressional delegation. It had been 6-2 but they pushed it to 7-1.

Dems didn’t have a lot of opportunity to Gerrymander in 2010 because they got wiped out in that election and Republicans controlled the entire process. So we have yet to see what Democrats would do if they had the same possibility. It is certainly a temptation that both sides have available to them going back for hundreds of years.

One would hope the experiences of the last decade has turned Democrats into reformers who are willing to think about the constructional changes to the system that we have to have if we want representational changes moving forward.

But Democrats remain in a really deep hole. Democrats can take back the house in 2018 but that does not do anything to change the poor position they sit in heading into redistricting in 2020.

In more than 40 states across the country it is state legislatures that control the redistricting and the republican advantage in the key states remains overwhelming.

Those states include Pennsylvania, Michigan, North Carolina, Ohio and Wisconsin. Those five states have sent 49 Republicans and 20 Democrats to Washington. Democrats, up to this point, have yet to flip a single seat blue on these maps. Nothing has been done thus far to address those.

Is the efficiency gap the true test for future gerrymandering cases?

There are multiple tools for determining when a partisan gerrymander has crossed basic lines of electoral fairness. The efficiency gap in many states is the very best

Courts have been relying on multiple standards, and the efficiency gap one of them. The combination of all of these tests put together that provide overwhelming proof of gerrymandering. When you are able to combine the efficiency gap with tens of thousands of computer simulations with the 50/50 test that tries shows the what the distribution seats would look like in a year if the two parties tied for the actual number of votes — when you take all of this and spread them out and all of them are partisan outliers, the court becomes much more willing to make a determination here.

There is a reason why the court has been proven to jump into the “political thicket” of ruling maps unconstitutional. They get very nervous about having to make such clearly partisan determinations. And if there is only one standard, that often that is not enough for them.

The Pennsylvania Supreme Court is has a partisan Democratic makeup. How does that play into redistricting cases?

Pennsylvania was one of the key states that Republicans tried to in their 2010 redistricting strategy called “red map,” and Republicans in 2010 captured the governorship and both branches of state house. And they were able to draw themselves huge advantages in the state.

When Democrats reawakened and realized what had happened, they realized were going to be on the short end in Pennsylvania for a long time, and they began thinking about their path forward might be. They very smartly hit on the 2015 election of the state and Supreme Court and ran a very well-organized and funded campaign to win judges on the Supreme Court that were more in line with their values.

The real reason they did this was with an eye towards redistricting after 2020 — if the Supreme Court played a role in re-districting in the state legislature — but it certainly paid off with having judges who were willing to make a groundbreaking ruling and paid off sooner than Pennsylvania Democrats imagined. It opened up a very important road with reformers in other states . There are 26 other states that have similar constitutional standards about fair, free and open elections in their state constitutions. No matter what the supreme court does in other cases, there is another potentially fruitful road for activists to head down and challenge extreme partisans.

Is the president hurting the future of partisan gerrymandering with his morning tweets?

He seems to be spouting the Republican line.

Republicans in Pennsylvania and North Carolina have gotten very aggressive in their rhetoric and they have been trying to spin responsibilities for how partisan these fights are coming against the Democrats. It's hard to imagine that will be an effective argument given how much is known about how intense Republicans were with the gerrymander this decade.

But this is such a partisan and polarized country right now that trying to make people see this through their red glasses or blue glasses is the only play Republicans have left. I think most Americans see this as a fairness issue. It may be that Republicans think the best way to move forward in these fights is to convince people that its about politics and not about fairness.

That becomes a troubling new field in an American organization if we are viewing every last district in that sort of partisan mind.