Russian trolls, fake news and provocateurs: That's been Trump's method all along 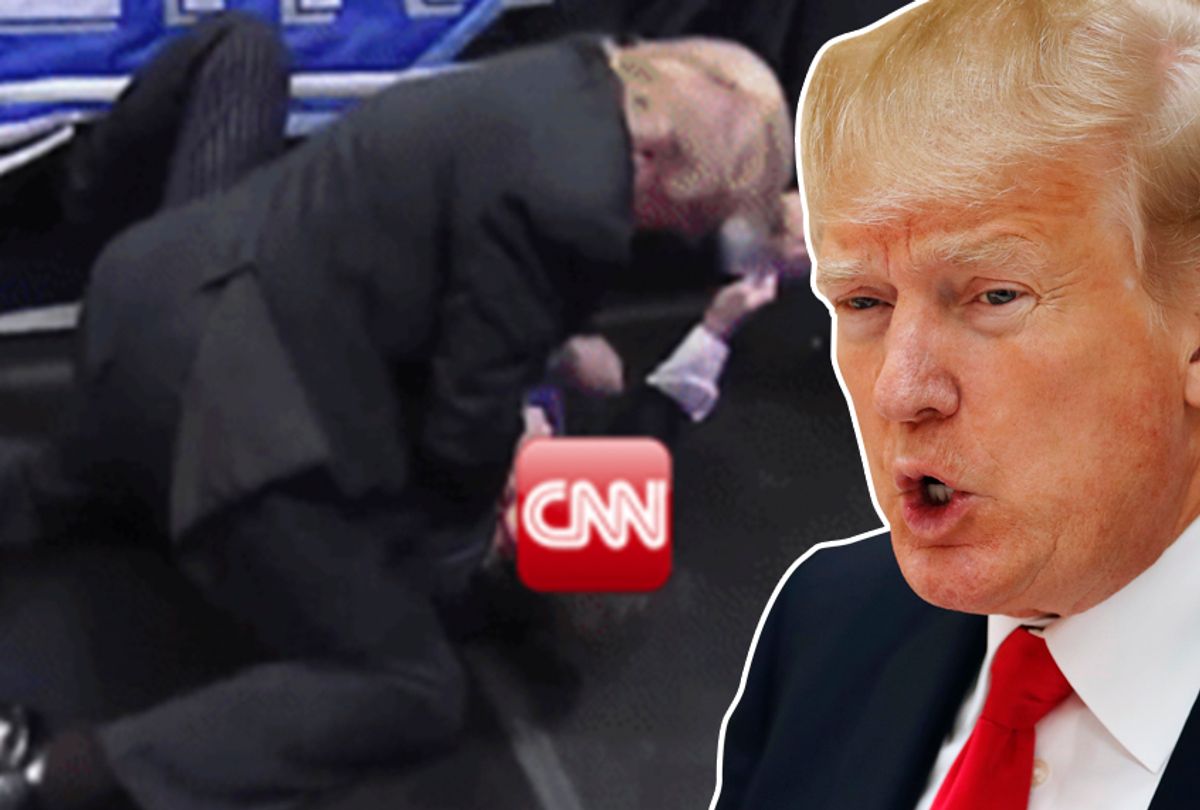 What is the secret of Donald Trump's political success?

Trump is effectively a professional wrestling heel (i.e., villain). He lies, demeans his opponents, cheats and then insults anyone who disagrees with him. When he gets caught conducting his foul business, he announces that he is the real victim.

Trump is a master salesman who keenly understood how to sell his particular brand -- which consists of racism, sexism, nativism, misogyny, ignorance, violence and crude behavior -- to his fanbase of human deplorables, who installed him in the White House.

Trump is a political con artist and a skilled showman. His reality TV-inspired spectacle is highly compelling to the lost, lonely and angry people who saw in him a role model and a human happiness pill.

For those (and other) reasons, Donald Trump was able to defeat Hillary Clinton, in quite likely the most bizarre presidential election in our history. Trump continues to use those traits and skills to remain popular among Republicans and his other supporters.

Because they were looking in the wrong places for answers, most of the chattering class were surprised by Trump's victory. I was not one of those voices. On national radio and TV, as well as here at Salon and elsewhere, I tried to sound the alarm about the high likelihood that Trump would win the 2016 presidential election. I was accused of being "hysterical," "too extreme" and overly "fatalistic," as well as "underestimating" the character of the Republican Party's voters and the American people. I was told I did not understand how "the system" worked.

Part of that prediction was influenced by my experience attending Donald Trump's infamous "no-show" rally in Chicago nearly two years ago. I listened to his supporters both outside and in the venue. I watched the melees after candidate Trump strategically declined to attend for "safety reasons," and I saw that it was Trump's public who instigated most of the violence. Such a spectacle was actually part of his plan. The logic was simple: Donald Trump would capitalize on fear. He sought to gin up White America's "law and order" anxieties about black and brown "criminals" and white "radicals" to win votes.

Moreover, the master provocateur, carnie showman and professional wrestler wannabe could even create that chaos himself. It would still advance his political goals.

Trump — who often says that he likes protesters because they are the only thing that makes camera operators aim away from him and pan his large crowds — also repeated a promise to deploy his own protests at future rallies but did not finish explaining why. “Every once in a while I’m going to bring my own demonstrator just to create —,” he said and trailed off.

It would seem that Donald Trump's campaign may have had quite a bit of assistance from Vladimir Putin's spies and other agents in transforming that idea into tangible action.

Last Friday, special counsel Robert Mueller announced that 13 Russians, three Russian entities and several Americans, would be criminally charged for their interference in the 2016 presidential election. Mueller's 37-page indictment explains in great detail how that cell of Russian operatives worked to subvert and manipulate the 2016 presidential election in favor of Donald Trump. As reported by the Guardian, some of these tactics included:

The Russians allegedly posed as Americans to operate bogus social media accounts, buy advertisements and stage political rallies. They stole the identities of real people in the US to post online and built computer systems in the US to hide the Russian origin of their activity. . . .

Events were organised by Russians posing as Trump supporters and as groups opposed to Trump such as Black Lives Matter, according to prosecutors. One advertisement shortly before the election promoted the Green party candidate Jill Stein, who is blamed by some Clinton backers for splitting the anti-Trump vote.

Lawfare also highlights an important detail: Mueller's indictment alleges that the Russian troll farm known as the Internet Research Agency used its bank and PayPal accounts "to fund online advertising and organize political events in the U.S. linked to its fake personas and pages — including, in some cases, paying people to appear at rallies."

In total, Mueller's indictment describes but one aspect of a sophisticated Russian propaganda operation that used the following core principles to great effect:

Russia's perception management campaign was highly successful. It propelled Donald Trump into the White House and created political chaos. Moreover, as I explained in an earlier essay here at Salon, Russia's principles of propaganda were so successful that as president, Trump continues to use them.

I predicted that Trump would become president. A year into his chaotic administration, I now offer a prediction about what will happen as Mueller continues to tighten his legal noose around Trump's White House.

It will soon become clear that Donald Trump, his inner circle and other allies actively conspired with Russian agents -- either directly or indirectly -- to steal the 2016 election from Hillary Clinton and the American people. This conspiracy involved a quid pro quo arrangement for information and policies favorable to Russian interests. Trump and his inner circle have also likely been personally enriched by Russian interests for being sympathetic to the latter's desires. Evidence will also indicate that Russian meddling in the American voting system was more extensive and effective than originally reported. The evidence will also show that Trump and his inner circle obstructed justice to derail the investigation into the Russian scandal.

But Donald Trump will not be impeached for his crimes. Nor will he resign. If he chooses to run in 2020, Trump will win again.

This is no great act of political prestidigitation nor an example of psychic powers. As during Trump's presidential campaign, my conclusion is simply a summation of what the facts indicate. Too many Americans and others refused to believe believe that the country's civic health was so poor that a petite-fascist demagogue could gain power after Barack Obama's presidency and the hopeful possibilities it signaled about the country's character.

More than a year later, I worry that once the true scale of Trump and his cabal's treasonous behavior is made publicly known, the Republican Party's leadership, and Trump's backers in the media and among the public, will continue to defend him -- or simply not care.

Today's American conservatives value partisanship more than patriotism. America's democracy will be forever broken. Short of a great reckoning, repairing it may be impossible.