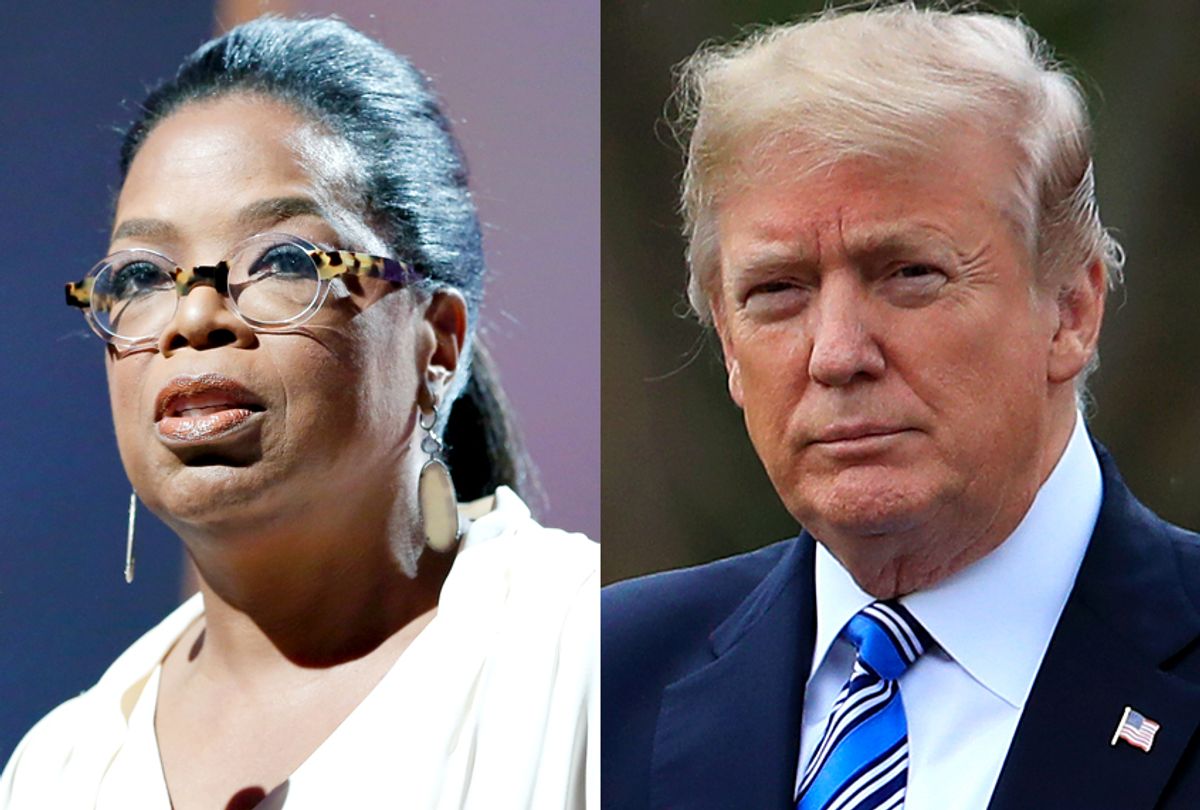 On Thursday's episode of "The Ellen DeGeneres Show," the host asked Winfrey what her thoughts were about the president's biting words. "I woke up and I just thought," Winfrey said, as she raised her arms up in confusion, her expression baffled, "I don't like giving negativity power, so I just thought, 'What?'"

Trump's tweet came after Winfrey hosted a segment on "60 Minutes" where she invited Michigan voters in support of and opposed the president back on the show reflected on his first year in office.

Winfrey explained that after the "hate-tweet," she rewatched the segment to see if any of his accusations had merit. "I went back and looked at every tape, I called the producer, because what actually happened was when you do '60 Minutes,' you sit in a room with at least seven other people who critique the piece before you air it," she said. "You have a whole panel of people looking at whether it was fair." Winfrey added that she advocated for more Republican perspectives to be included in the conversation to ensure the segment's balance. "So I was working very hard to do the opposite of what I was hate-tweeted about," she said.

But Trump has a well-documented habit of categorizing any critique of himself or his administration, (but mostly himself) as biased or inaccurate. So it makes sense that Winfrey simply speaking to Democrats with opposing views would result in the president's Twitter tirade. Certainly, the publicity is only anchoring Winfrey's popularity, especially as people continue to fantasize about her potential run for president. It's a possibility even Trump is toying with, or likely threatened by, as he added in the same tweet calling her insecure: "Hope Oprah runs so she can be exposed and defeated just like all of the others!"

It seems like Trump is trying to get ahead of Winfrey's still very unconfirmed campaign and rile his supporters in formation against the beloved media mogul, just in case Winfrey does in fact decide to run.

She has repeatedly denied the claims though, even as CNN reported last week that three sources close to Winfrey revealed that she says "she is 'not running' for president right now, but she has not ruled it out in private conversations." But it is hard to imagine that "three confidants" of Winfrey would speak to such a massive broadcaster like CNN without getting the clear from Winfrey herself. Even Winfrey's own language leaves room for interpretation. A spokesperson for Winfrey told CNN, "there are no plans in the works for her to run," which reads more like a 'not-right-now' rather than 'never.'

Just given the sheer amount of coverage surrounding her potential bid, there is a certainly a feasible market for Winfrey should she change her mind. Not to mention her obvious power: the president writes a nasty tweet and Winfrey is dispelling the claims on "Ellen" days later. Surely she is not going through the show's booking agent for such press access. Or just maybe, we are all so desperate for a viable 2020 contender that we just can't bear to take Winfrey's answer at face value. Either way, Oprah Winfrey wins, which means the president is probably "sad!"