Why Oprah offends Trump to his very (dark) soul

The open sore in the Oval Office seems to be very threatened by our nation's de facto healer. Why? We have theories 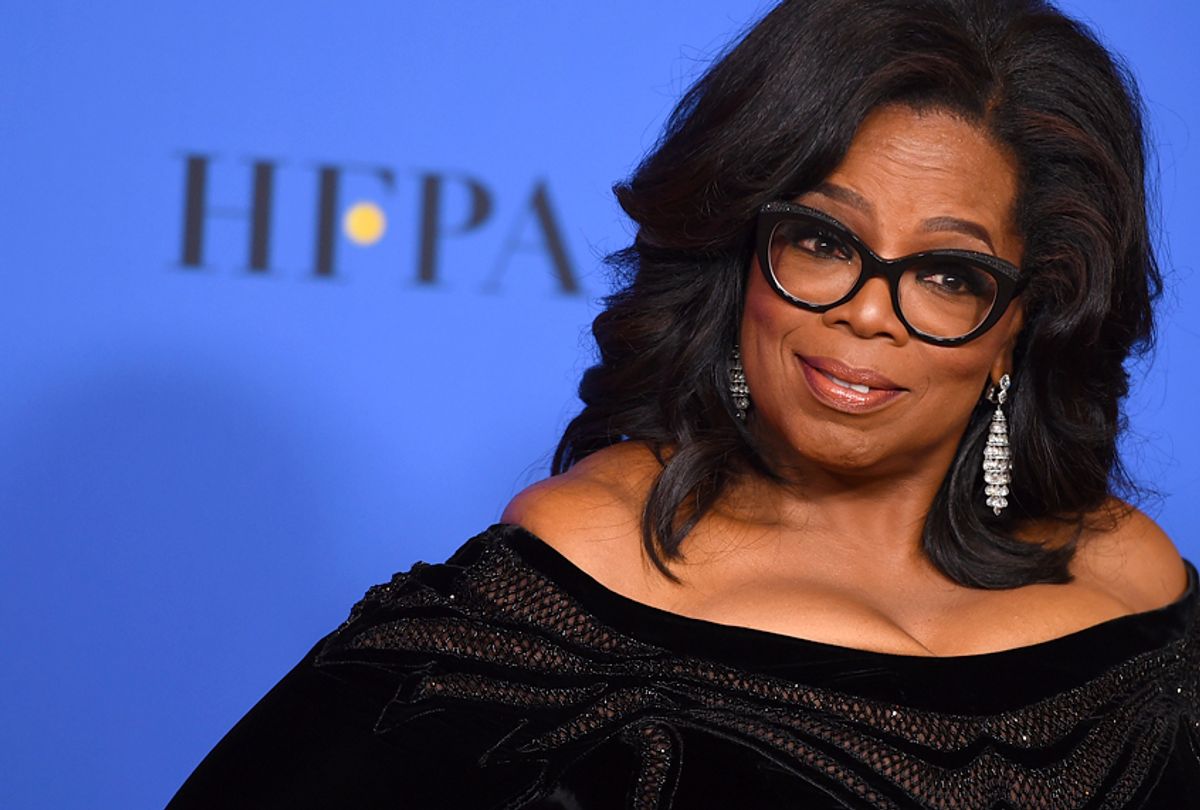 In case you haven’t noticed, Donald Trump is threatened by Oprah Winfrey. Like, in a tiny quivering hands kind of way.

“Just watched a very insecure Oprah Winfrey, who at one point I knew very well, interview a panel of people on 60 Minutes,” Trump tweeted just before midnight on Sunday, apparently after having viewed Oprah’s “60 Minutes” segment featuring her return to speak with voters in Grand Rapids, Michigan. “The questions were biased and slanted, the facts incorrect. Hope Oprah runs so she can be exposed and defeated just like all of the others!”

Like most of what Trump says or tweets, the substance of this toilet-top missive is utter hooey and misrepresents what the segment actually was about.

But, even more importantly, he doesn’t want her to run so she can be “exposed.”

Trump wants Oprah to run in order to pit his brand against hers, in a heee-yooge “lay ‘em on the table and haul out the meter sticks” contest. This is why such a race will never happen.

It’s not that Oprah fears such a thing. Rather, as someone whose net worth exceeds that of several countries, Oprah does not need the enhancement of the presidency. Her brand is bigger, stronger, and has way more staying power.

Every day is a freestyle taco fiesta for Oprah. Each Sunday that she doesn’t spend as a “60 Minutes” correspondent is a Super Soul Sunday. This is an arena in which Trump cannot compete, the secret ingredient perpetuating Oprah’s global reach: her packaging of spiritual growth and healing.

“Now it’s time for America to bind its wounds of division,” Trump said in his election night victory speech, pledging to be a president for all Americans. But he’s kind of whiffed that part of the deal, and bigly.

Contrast this with the soul touch of Oprah, a woman who gets people to do and say impossible things, such as believing in the power of empty jars or the merits of $35 English muffins, or believing in doctors Oz and Phil, or reading books. So many books!

Can you imagine Oprah doing a listening tour during primary season? You don’t have to — she’s already done it. It was called “Oprah’s Lifeclass.” Oprah can share life lessons about trusting your gut via videos starring lambs; Trump would look at that video and mention that his line of steaks is way better than lamb, so much better, the best, also baby lambs are dumb.

Thus, Oprah may be the only quasi-journalist (or as she dubs herself, conversationalist) who can do what Trump never could, and gather a group of 14 political opposites around a table and not only get them to speak to each other but, in a very Oprah-esque twist, inspire them to continue their dialogue long after the cameras stopped rolling.

Sunday’s “60 Minutes”’ showed Oprah’s follow-up to a roundtable discussion she conducted in September, featuring a group divided between seven people who voted for Trump and seven who did not. To mark the occasion of Trump’s year anniversary in office, she regathered them to see whether their views had changed.

(Coincidentally, this second interview took place shortly after her memorable Golden Globes speech in which she unabashedly supported #TimesUp. Asked by an interviewer in a supplementary “60 Minutes Overtime” video if her speech was a temperature test for a political run, she replies, “I was just trying to give a good speech. I was looking for a way to express what was going on in this moment in terms of gender, and class, and race.”)

A sampling of her allegedly slanted questions includes the following: “When we first met, there were some of you who had said, you know, you'd never been in conversations, certainly engagement, with members of the opposite side, political side. So has that changed for you now?”

What may have ticked off Trump is, “There have been some members of Congress, including Republicans, questioning his stability and fitness for office. What do you think of that, and do you believe he has the temperament to be president?” Or perhaps it was, “Who here believes that he made the comment about, quote, "shithole countries? . . . You think all presidents have used the term shithole?”

To nobody’s surprise, the Trump voters had no regrets. In fact, one man professed that he still loved the President more and more every day.

But for whatever reason, the men and women stayed in touch, communicating regularly in a closed Facebook chat group titled "America's Hope.” Some forged friendships and went on outings together. This is why Oprah returned with conservative pollster Frank Luntz in tow. “This never, ever happens,” Luntz said.

And this is something Trump can never accomplish and, moreover, has no desire to.

Trump likely feels he can safely go after Oprah because it continues his trend of going after powerful black women on social media; he attacked Florida congresswoman Federica Wilson for confirming his callous comments to a black Gold Star widow, and targeted ESPN's Jemele Hill for her comments supporting NFL players' protests. Any high profile black woman whose name isn't Omarosa is fair game (but give him time on that one — remember, he once adored Oprah and fantasized about her being his running mate). Why not take aim at the world’s first black female billionaire, especially given the chorus of calls for her to run for the top office?

Oprah also is an especially safe target because she will never descend from the rare ether of the moral high ground to answer his challenges. On Twitter.

Oprah tweets, mind you. Just not about the president. Here's one that went viral on Tuesday while coverage of Trump's swipe at her was peaking.

George and Amal, I couldn’t agree with you more. I am joining forces with you and will match your $500,000 donation to ‘March For Our Lives.’ These inspiring young people remind me of the Freedom Riders of the 60s who also said we’ve had ENOUGH and our voices will be heard.

She's not completely above trolling Trump, though; she just does it surreptitiously. People visiting Oprah.com on Tuesday were greeted with an excerpt of Oprah's conversation with Marla Maples on a 1992 episode of “The Oprah Winfrey Show." For whatever reason, that ancient video was being surfaced on a main page. Who knows why?

Anyway, in the segment Oprah flashes back to an even more classic clip of Trump's 1988 visit to the show with his first wife Ivana.

When the host asks about that relationship, Trump replies, “We get along very well, and there’s not a lot of disagreement, because, ultimately Ivana does exactly as I tell her to do.”

Ivana then throws back her head and laughs. “Male chauvinist!” she chortles elegantly.

Back in 1992, Oprah asks Maples if Trump is controlling. “He’s a very strong person,” she replies, going on to call him a loving man “who tries his best to do the right thing and just make it in this life.” We know what happened after that. Tiffany happened after that. Then, Melania. And Stormy Daniels and heaven knows who else.

Oprah has said time and again that she does not plan to run for President. She said it again on "60 Minutes Overtime." Even so, you just know Trump wants this match-up because of the ratings potential. Just picture it.

But this lady is playing the long game. The entirety of the Oprah brand exists to troll Trump, albeit inadvertently, via endless clips and articles about toxic relationships  and people, the danger of hidden narcissists and, oh yeah, that recent poll that indicates that in a potential presidential race, she'd win. In an era of mass decline in our sense of well-being, she markets meditation and awareness and hope. Why, if you were to visit her website’s page on “Super Soul Sessions” right now, you can find her talking to “spiritual pioneer” Gary Zukav about living in a world of fear-based leadership which, she observes, "is only going to lead to more fear, and create more fear, unless we the people can authentically align with ourselves.”

In this moment a woman in the audience calls out, “Oprah for president!” and the place erupts.

Eyes downcast, she smiles gently and lets the roar of applause die back. “No thank you,” she says, because regardless of what happens between now and 2020, she’s already winning.