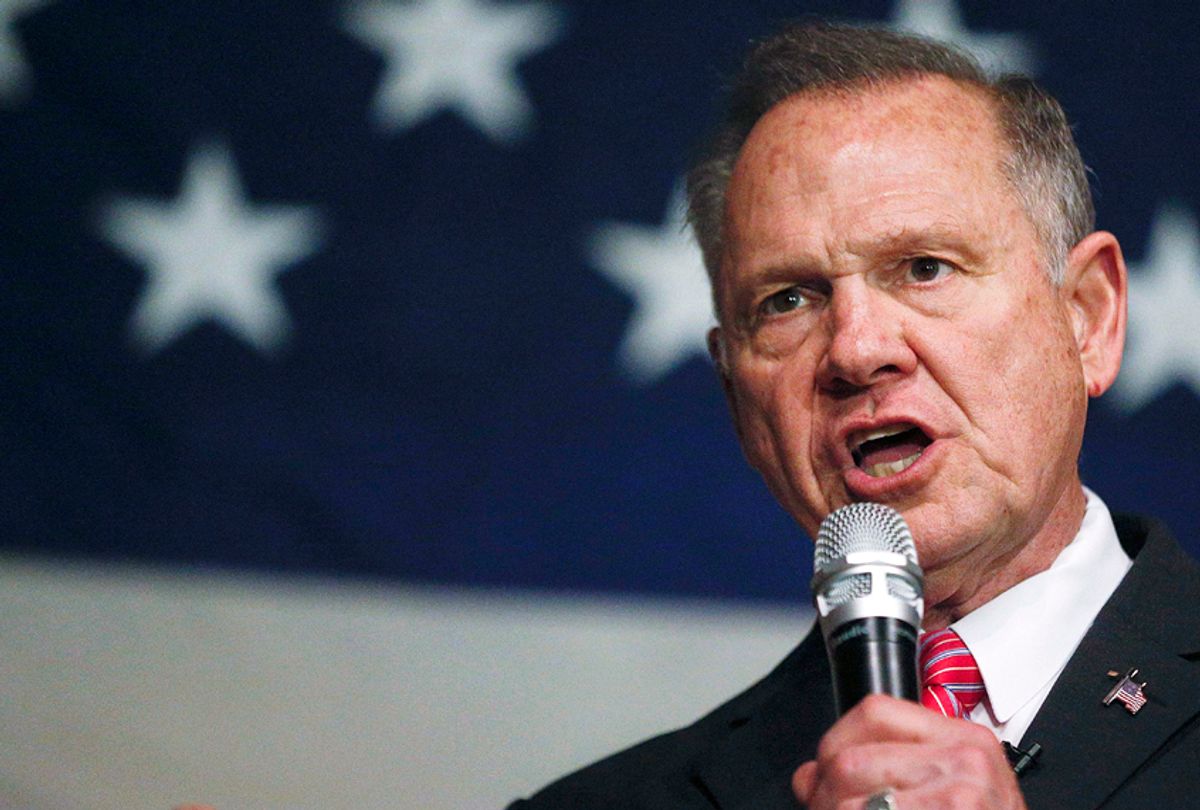 Roy Moore, the former Alabama judge who lost his bid for the U.S. Senate to Democrat Doug Jones, has resurfaced to endorse a fellow Republican candidate who could in many ways be called his mini-me.

On Monday, Courtland Sykes, a long-shot candidate who is running in the Republican U.S. Senate primary in Missouri, announced that he had secured Moore's approval.

"Courtland is a man of impeccable character, courage, and Christian faith," Moore said in a statement which Sykes forwarded via his Facebook profile.

Both Moore and Sykes seem to have a common viewpoint about how women belong at home. In 2011, Moore contributed to a book which used the Bible to argue that women should not be allowed to run for political office. Sykes has touted his anti-feminist viewpoints as a means of gaining national attention for his candidacy, including past remarks trashing independent women as "career-obsessed banshees who forego home life and children and the happiness of family to become nail-biting manophobic hell-bent feminist she-devils."

In a statement of his own responding to the Moore endorsement, Sykes slathered praise on his fellow Christian nationalist.

"Judge Moore, a West Point graduate and Vietnam veteran is a legend and a towering figure in Alabama and a historic national figure in America," Sykes wrote.

Both Sykes and Moore lashed out at the news media for supposed dishonesty.

"If you are tired of special interest politicians and liberal news organizations who seek to control us with 'fake news,' then I ask for you to vote for Courtland Sykes," the disgraced former judge wrote.

Sykes also aired his own criticism of the media, attacking "twisted big money newspaper liberals" and claiming that nefarious leftist journalists are cooking up plans to hire women to make fake sexual harassment allegations "in order to steal any election and to destroy any conservative person."

Naturally, Sykes did not mention that his fiancée has embraced unproven allegations of child molestation far-right types have lobbed against former president Bill Clinton.

Moore's endorsement of Sykes came after his flagging campaign failed to secure the endorsement of President Donald Trump. Last November, Trump endorsed Missouri's attorney general, Josh Hawley, a man who once claimed that sex trafficking in the United States increased thanks to women being allowed to make their own sexual choices.

Missouri is also the home state of Todd Akin, a former U.S. Senate candidate who lost his race after he stated that he did not support a right to abortion in the case of rape since he believed that women could not get pregnant from forced sexual intercourse.