"The dress" was the beginning of "alternative facts"

It started as a debate over color; now it's our everyday reality 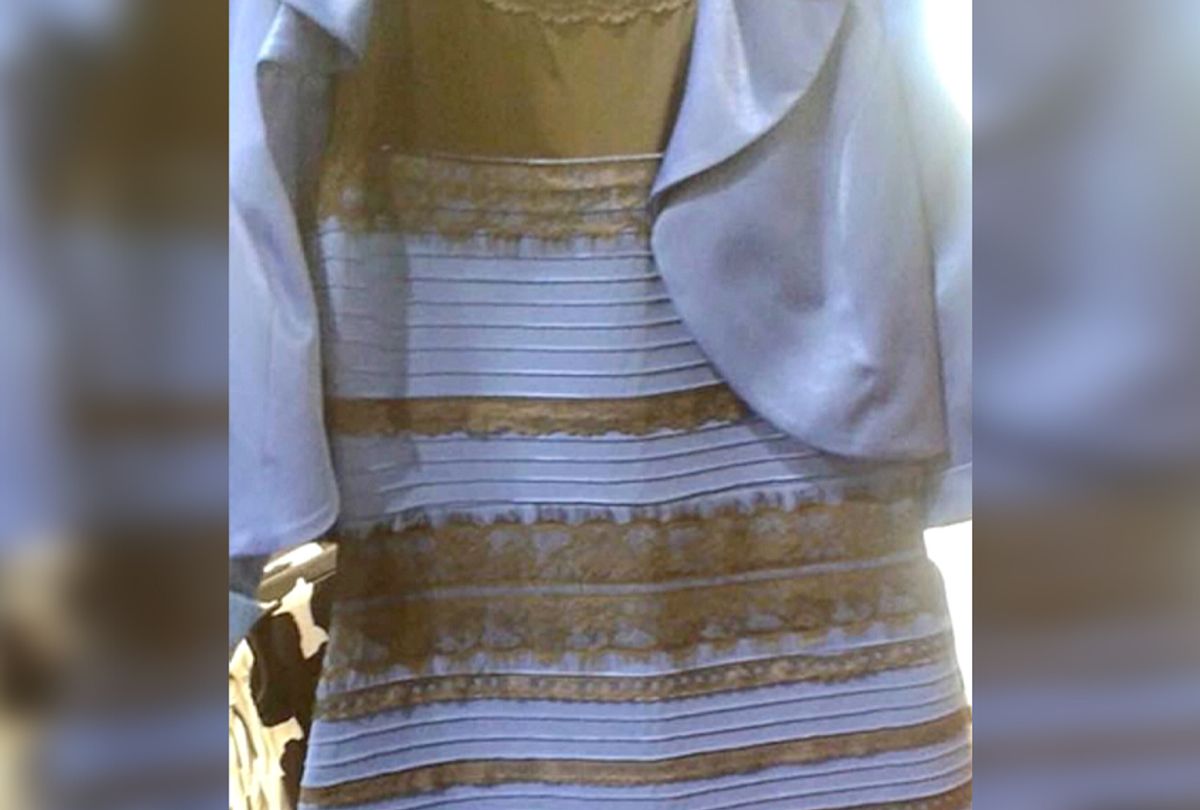 Do you remember where you were three years ago? Do you remember laughing and then fighting over a ridiculous meme? Do you remember the day, in short, objective reality as we once knew it died? I'm not saying that "the dress," as it swiftly and notoriously became known, is the reason for the current occupant of the White House. I'm just asking, but isn't it?

I recall precisely how it unfolded for me — kind of like a Stephen King novel. It was the evening of February 26, 2015. Shortly after dinner. My elder daughter got a text from a classmate, looked at her phone — and then asked me a fateful question. "What color is this dress?" Within minutes she was moaning, "It's tearing this family apart." It was a social media post of a party dress, casually snapped by a Scottish mom and sent to her bride-to-be daughter. A friend of the daughter posted it on Facebook, and a storm was born. For the record, the Roman Originals dress, with its satin fabric folds and horizontal lace bands, is blue and black, and anyone who says otherwise (Kim Kardashian, B.J. Novak, my spouse) is literally insane. Unsurprisingly, Taylor Swift and Katy Perry saw it differently, with Perry adding the commentary that "I've read though there's a vitamin d deficiency in people who see blue and black."

Over the next day, the company that makes the dress got over 3.5 million hits and sold out of the sheath. Scientists soon rushed to explain the the ways that individual retinas perceive light. Photographers blamed the problem on a poor exposure. For a time, the world was dress, and only dress. And then, it seemed, the whole thing blew over.

But three years later, you can't help noticing versions of the dress debate seemingly everywhere — only on an exponentially less entertaining scale. We'll get Mexico to pay for a border wall! Chrysler is leaving Mexico to create jobs in the US! The economy is doing GREAT! DACA is dead! The inauguration audience was YUGE. The YUGEST! These are the kinds of statements that at one point would have been politely called "incorrect." But shortly after the 2017 presidential inauguration, Kellyanne Conway casually told "Meet the Press" that then press secretary Sean Spicer simply "gave alternative facts" regarding the size of the crowd, and this new way of looking at the world officially entered the vernacular.

Your eyes perceive color differently than mine. Your views on key issues may be different from mine as well. But facts are immutable. The last two years have been an epic adventure in gaslighting, in living within the wobbly sensation of watching people debate and argue not what they perceive is true but truth itself, and of media outlets ramping up their practice of giving "equal time" to " both sides" of important issues. It makes people who are wrong about objectively verifiable things believe they are entitled to go on being wrong, because hey, whatever, let's just agree to disagree. What if I calculate pi to a different number? Who's to say? But we degrade reality when we reuse to accept it. The earth is round. "Moonlight" won Best Picture. And that damn dress is blue.