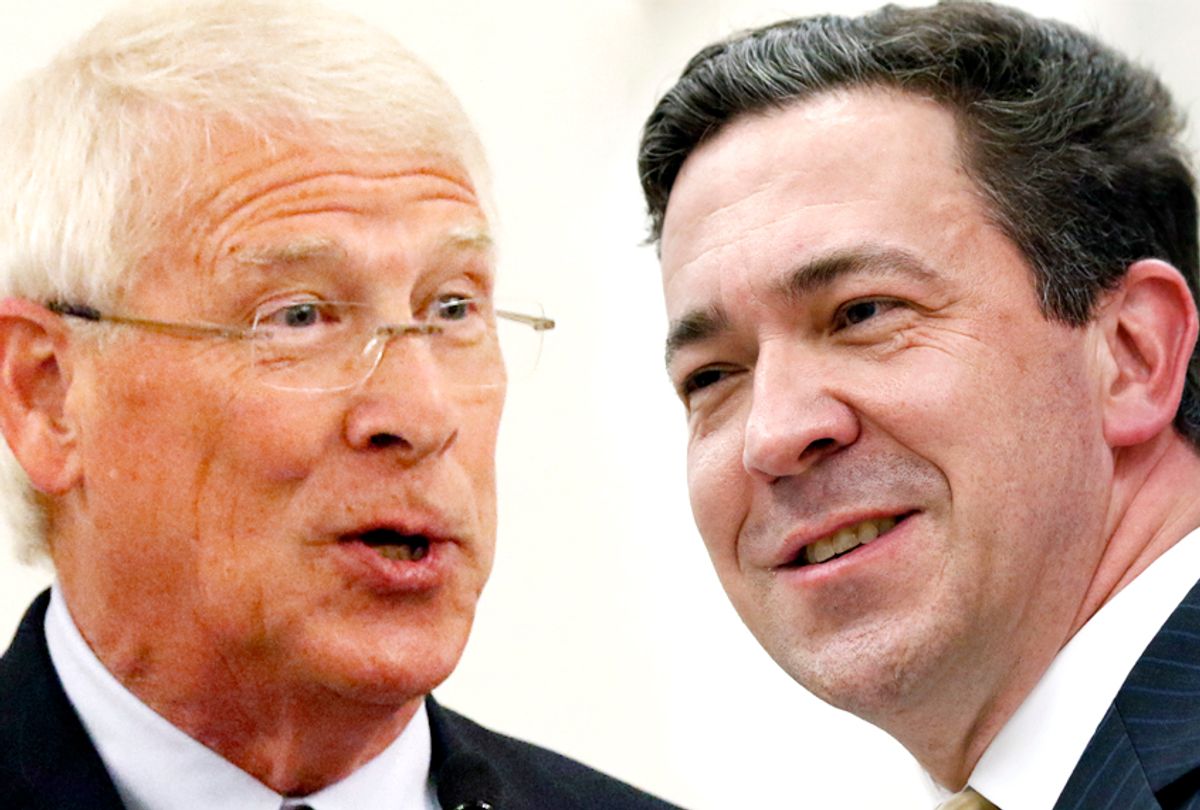 Mississippi state Sen. Chris McDaniel announced on Wednesday that he is going to challenge incumbent U.S. Sen. Roger Wicker in the Republican primary that will be held June 5, setting up what is likely to be another bitter contest in the political war that far-right activists have been waging against elected Republicans.

In a speech announcing his intent to run, McDaniel condemned Wicker as insufficiently pure.

“Roger Wicker is one of the most liberal Republican members of Congress,” he said. (According to the non-partisan NOMINATE scoring system, Wicker is right in the middle of most Senate Republicans ideologically.)

The long-running intra-GOP struggle between the conservative leadership and its far-right critics has resulted in few general election victories for the insurgents, even as they have been able to prevail in a number of primary elections.

The upcoming Mississippi race is likely to be particularly inflammatory in light of McDaniel’s 2014 failure to unseat the Magnolia State’s other federal senator, Thad Cochran. Four years ago, McDaniel earned the most votes in the initial primary but was unable to secure a majority. In a run-off election, Cochran was able to defeat him, thanks in part to votes from black Democrats who were invited to take part in the second vote by national Republicans who wanted to keep McDaniel out of the Senate. McDaniel and his supporters were enraged at the outcome, and he refused to concede the loss. His announcement to run against Wicker on Wednesday came just one day before the Mississippi candidate filing deadline.

Last September in neighboring Alabama, Christian nationalist candidate Roy Moore was able to win the GOP primary but unable to defeat Democrat Doug Jones. Like McDaniel before him, Moore infamously refused to concede. That contest has several other parallels to the one in which McDaniel and Wicker are now engaged. As in Alabama, both candidates are offering competing narratives about their loyalty to President Donald Trump, who won Mississippi’s popular vote by 18 percent in 2016.

McDaniel was one of many far-right activists who had opposed Trump in the GOP presidential race of 2016 on suspicions that Trump was a New York liberal. Wicker was neutral in the primary but campaigned on Trump’s behalf after he became the party nominee. Since Trump’s victory, anti-government Republicans have publicly reconciled themselves to him.

Trump, who is famous for demanding loyalty from fellow Republicans, appears to have appreciated Wicker’s help. He backed the Mississippi senator in a Tuesday tweet after news broke that McDaniel was planning to run.

“.@SenatorWicker of Mississippi has been a great supporter and incredible help in getting our massive Tax Cut Bill done and approved,” Trump wrote. “I am with him in his re-election all the way!”

Trump’s move paralleled his actions in last year’s Alabama GOP primary where he followed party tradition and backed the incumbent, Luther Strange. Voters declined to follow the president’s lead, however, and instead picked Moore.

In his announcement speech, McDaniel, a former talk radio host, tried to brush aside Trump’s endorsement of Wicker as something the president had to do as the leader of the GOP.

“Over the past few days, he’s endorsed Mitt Romney, he’s endorsed Roger Wicker and he endorsed one of the Bush boys from Texas,” McDaniel said. “We’re not mad about it, we understand it. That’s the Washington way—you have to cut deals. But I want to be clear, when I get there, I’m not cutting any deals,” he added.

McDaniel further claimed that Wicker, who has long been an ally of Senate Majority Leader Mitch McConnell, has only been pretending to be conservative in order to secure Trump’s support.

“Thank God for President Trump he has made Roger Wicker a conservative for about three weeks,” he said. “He has found the light now. He senses the possibility of a primary challenger and now he wants you to forget all those bad votes.”

The Confederate Battle Flag is likely to be one of several key points of contention between the two candidates. After a mass shooting at a black church in South Carolina in 2015, Wicker and a number of Mississippi Republicans began calling for the removal of the Confederate emblem from the state flag’s design. McDaniel, who has spoken repeatedly to Sons of Confederate Veterans events, continues to defend the current flag. It’s something he has in common with Roy Moore, who has a long record of promoting neo-Confederate groups and people.

As in Alabama, Democrats have not had much luck with statewide races. But after word got out this week that McDaniel was looking to begin a brawl with Wicker, Rep. David Baria, the Democratic leader in the state House of Representatives, announced that he would be jumping into the race.

“I want to give voters a true choice, and I plan to spend the campaign listening to voters and working hard to earn their trust,” Baria said in a public statement.

A veteran lawmaker and attorney, Baria was one of several local politicians who had been recruited by national Democratic leaders.

“I think it takes a somewhat unique dynamic to see a path of victory for a Democrat in a U.S. Senate race in Mississippi,” Baria said in an interview with Mississippi Today. “In a vacuum, Chris McDaniel getting in against Wicker creates the kind of dynamic that leads me to believe that might be achievable.”

Baria will be facing investor Howard Sherman, the husband of actress Sela Ward, in the Democratic primary.

In an interview with the Jackson-based Clarion-Ledger newspaper, Mississippi Democratic Party Chairman Bobby Moak argued that recent elections in normally Republican areas were an indication that Democrats stand a chance this fall in Mississippi.

“I think somebody’s evidently put lightning in a bottle, and we are trying to get lightning to strike here,” he said. “We saw Alabama (Doug Jones) and then the month after that we saw what happened in Virginia, and we see 34 contested legislative seats and voters wanting a change. I think there’s local energy and there’s state energy and people want to talk about the real issues.”

Should McDaniel manage to defeat Wicker, Democrats’ odds would certainly be better. In 2012, Wicker won his general election by nearly 17 points.

While Wicker remains popular within the state and has a campaign fund of more than $4 million, McDaniel has been working since 2014 to keep the fires of Tea Party rage burning. A super PAC that is supporting his candidacy has raised more than $1 million, thanks to support from Trump’s biggest financial backer Robert Mercer.

It is unclear whether Mercer will continue supporting McDaniel in the future, however, since he had given the money in support of a strategy advocated by Steve Bannon, the former Trump adviser who has since been exiled from the White House and Mercer. Bannon’s idea of challenging every GOP Senate incumbent took a big blow after Moore’s failure in Alabama sent the message that even staunchly Republican states might not go for candidates with too much baggage.

Even if McDaniel fails to secure the GOP nomination this time, he left the option open on Wednesday to challenge Cochran once again. Cochran, 80, has been widely reported to be in ill-health and many observers of politics in the Magnolia State had expected him to resign from the Senate instead of serving out his term.

“In politics anything is possible,” McDaniel said. “In politics, you always keep your options open."