Never mind the sex scandals: Roy Moore is a son of the Confederacy 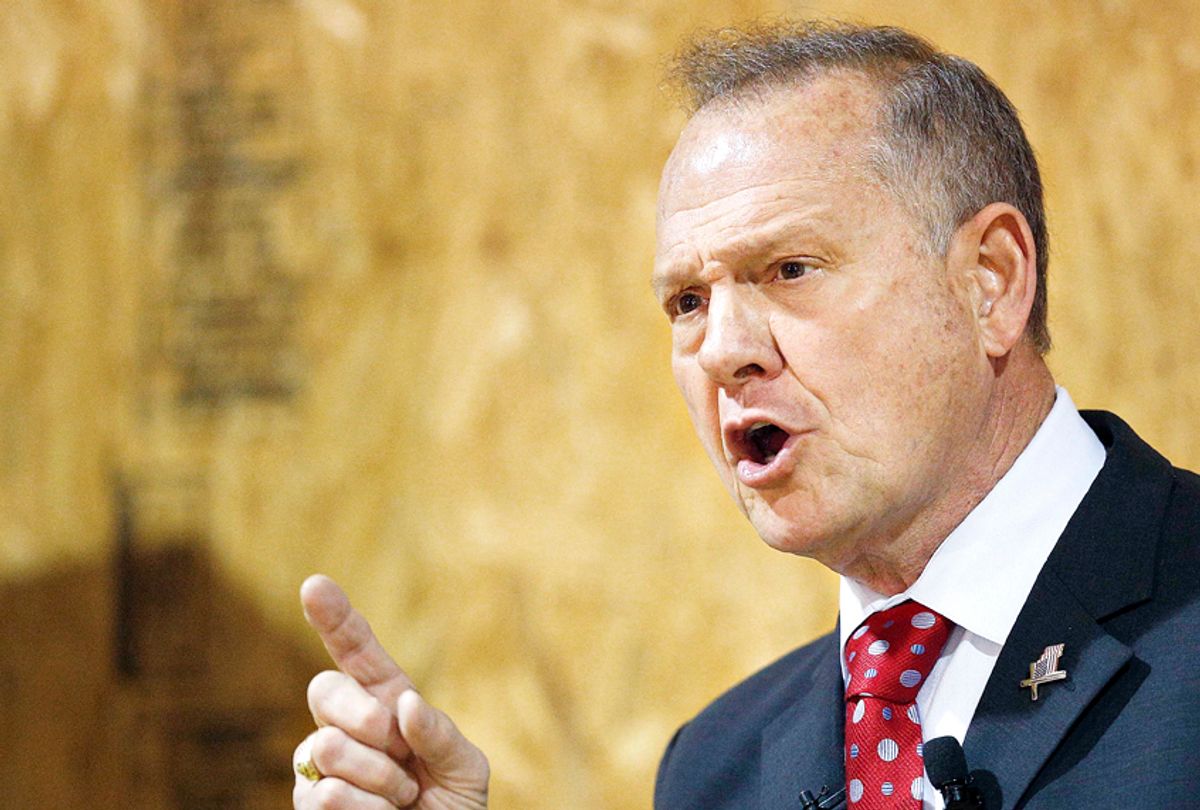 Amid all the controversy that has recently surrounded Alabama U.S. Senate candidate Roy Moore for his alleged activities with teenagers in the 1970s, the Republican nominee’s ties to individuals and groups who admire and praise the Confederate States of America -- a breakaway republic founded on slavery -- have received significantly less attention.

Moore, who is facing Democrat Doug Jones in a special election on Tuesday, has insisted that he is not a racist. This week, Moore’s campaign called him “a champion of civil rights.” On Monday, he told Christian nationalist radio host Sandy Rios that he had a “great amount of support in the community.”

“This issue of racism is completely ridiculous,” Moore said. “I’m not a racist. I don’t stand against people because of the color of their skin. I believe that our founding documents quite clearly point out God made us all equal and created us in his own image.”

Contrary to Moore’s denial, however, he has extensive ties to people who have been involved with neo-Confederate groups. Like Moore, his controversial associates have also claimed they are not racist. Beyond the racial views they conceal in public, one thing Moore and his allies have in common is their shared view that Christians should have more rights than non-Christians and that America should be ordered in accordance with their understanding of Biblical law.

Moore’s connection to the Christian supremacist universe has primarily come through the Foundation for Moral Law, a nonprofit organization he established in 2003. That was shortly after he was removed from the Alabama Supreme Court for failing to abide by a federal judge’s directive to remove a large Ten Commandments memorial from the state court’s grounds.

The foundation has become notorious in recent months for its duplicitous accounting (including off-the-books payments to Moore under the stewardship of his wife, Kayla, who is its president) and its willingness to receive a donation from avowed neo-Nazi Willis Carto. It also has long employed John Eidsmoe, a radical Christian attorney who has written extensively about how Biblical law as described in the Old Testament should supersede the American legal system.

Eidsmoe, who was the law school mentor of former Rep. Michele Bachmann, R-Minn., has also spoken at a “Secession Day” event and addressed a segregationist group called the Council of Conservative Citizens. Like Moore, Eidsmoe says he is not a racist. He has defended speaking to controversial groups by claiming he will speak “to anyone.”

Ironically, while Eidsmoe continues to associate himself with Moore despite allegations that Moore molested teenage girls, Eidsmoe has also warned the U.S. military not to admit lesbians and gays out of fear that doing so would increase sex crimes against children. “It is also reasonable to assume more child molestation would take place on military outposts. … If homosexuals are allowed into the military, base housing may no longer be perceived as safe for children,” he wrote in 1993.

One of the largest contributors to Moore's foundation is Michael Peroutka, a former board member of the League of the South, a small group that has long extolled the Confederacy.

Peroutka, who is now a county government official in Maryland and remains a staunch Moore ally, has given Moore’s foundation and his various campaigns at least $600,000 over the years, according to calculations made by Talking Points Memo. He also offered direct and personal financial aid to Moore on at least one occasion. In 2003, a few months after Moore was removed from the Alabama Supreme Court, Peroutka purchased Moore's house in the small town of Deatsville, Alabama, for 22 percent more than the Moore had paid for it just two years earlier, according to county property tax records obtained by Salon.

Like Moore, Peroutka has claimed to be opposed to racism when confronted about some of the League of the South’s activities. Peroutka’s own behavior belies that explanation, however. In 2014, he said that he wanted to be “a true Confederate” and in 2004 he told an audience he was “still angry” that his native Maryland had not seceded from the Union during the Civil War.

As might be expected, Peroutka’s racial and religious views are closely linked.

“The South is this remnant of a Christian understanding of law and government where there is a God and government is God-ordained,” he said in that same 2004 address.

In a 2012 speech, Peroutka addressed a statement made by Michael Hill, the League of the South’s openly white separatist president, claiming that America was irredeemably corrupt. Peroutka said he agreed with that idea and argued that explicit Christian supremacy was the only true answer to the country’s problems.

“I don’t disagree with Dr. Hill at all that this regime is beyond reform. I think that’s an obvious fact and I agree with him. However, I do agree that when you secede or however the destruction and the rubble of this regime takes place and how it plays out, you’re going to need to take a biblical worldview and apply it to civil law and government,” he said.

Even apart from Moore’s close association with neo-Confederates, his own past actions indicate he may be dissembling when he denies racial prejudice.

Shortly after his removal from the Alabama judicial bench in 2003, Moore became an ardent opponent of Amendment 2, a ballot initiative that would have removed segregationist language from the state’s constitution. Even though the measure was primarily symbolic in nature (since federal law explicitly forbids states and localities from separating citizens by race), Moore opposed the measure, calling it “the most deceptive piece of legislation I have ever seen.” He argued that it was actually a plot by liberals to force Alabama to spend more on public education.

Moore’s Alabama Supreme Court office was adorned with a portrait of the secessionist regime’s only president, Jefferson Davis, as well as busts of Confederate generals Robert E. Lee and Stonewall Jackson.

Moore was also recently captured on audio claiming that the last time America was “great” was before the Civil War, an allusion to a commonplace belief among far-right extremists that black Americans were better off under slavery before the modern welfare state.

“I think it was great at the time when families were united — even though we had slavery — they cared for one another. People were strong in the families. Our families were strong, our country had a direction and we corrected many of the problems,” Moore said in a September campaign speech that was first reported by the Los Angeles Times.

The twice-censured judge has also spoken against all the constitutional amendments enacted after the Bill of Rights, agreeing with a suggestion from a conspiracy-minded radio host that repealing these constitutional revisions would “eliminate many problems.” He did not discuss how amendments that had banned slavery and allowed people of all races and sexes to vote had harmed America.

The Moore campaign did not respond to a request for comment when contacted by Salon.