All talk, little action: How Trump bungled an opioid fix

The president declared a war on opioids. Opioids are winning 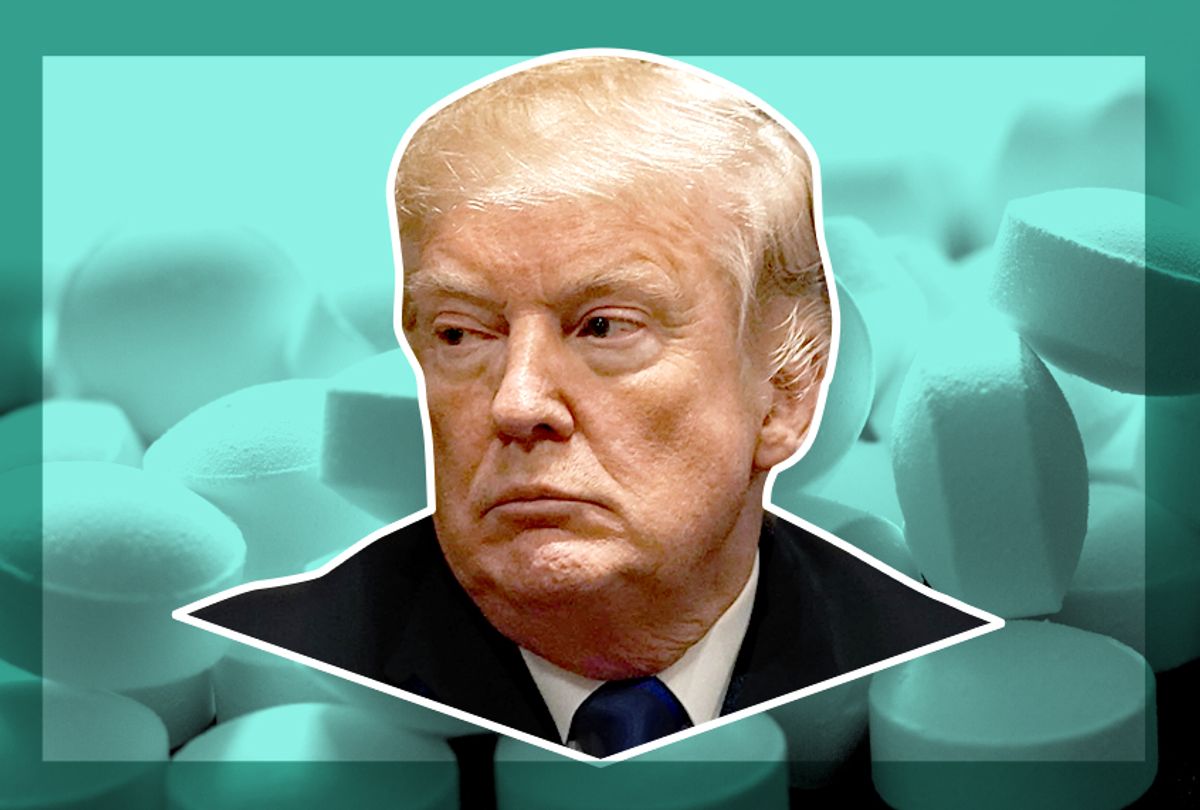 The leading cause of death for Americans under 50 is a drug overdose. Less than a month before President Donald Trump was elected in 2016, he said that there needed to be a plan "to end the opioid epidemic."

Since the announcement last October that opioids were a public health emergency, his administration has yielded no new funds to combat the crisis that has swept America in recent years and claims an average of 115 lives on a daily basis. The recent budget plan passed by Congress for 2019 will eventually usher in new money, but that doesn't help those who need it now.

Trump's plan to fix the opioid crisis has so far been nothing more than lip service, while governors across the nation have pleaded for more resources to no avail. In the past, he's said a border wall would help slow the flow of drugs into the country that has exacerbated the crisis, but dozens of experts have said that a wall would have no impact on the crisis as a whole.

The Office of National Drug Control Policy is still without a leader. The person who was nominated, Rep. Tom Marino, R-Pa., withdrew himself after it was reported that he backed legislation that would make it more difficult for federal agents to pursue pharmaceutical companies responsible for flooding the nation with opioids.

Anything that Trump does about the crisis — which claimed more lives in 2016 than all American casualties in the Vietnam War — that doesn't address aggressively going after the major pharmaceutical corporations that flood regions with drugs and punish the doctors that allow it to happen can't be taken seriously.

Despite the rhetoric, big pharma has done quite well under the Trump administration. Even though Trump said he would be tough on drugmakers, the companies were rewarded with the GOP-led tax plan he signed in December. As a result, nine companies invested a combined total of $50 billion in share buyback programs for investors, while those funds far outweighed any investments into employees and drug research and development.

Doctors have a history of overprescription of opioids. Drugmakers, meanwhile, have a well-documented past of shipping excess amount of pills to places across the country. Take Kermit, West Virginia, for example, which saw 9 million hydrocodone pills flood its town over two years, even though only 392 people live there.

Nonetheless, on Thursday night at the White House opioid summit, the president all but explicitly said that he would battle the epidemic by implementing a tougher law enforcement stance. He suggested "the ultimate penalty" was needed for drug dealers, which corroborated reports from earlier in the week that revealed he had praised the implementation of the death penalty in regards to drugs in other countries.

"We have pushers and drugs dealers, they are killing hundreds and hundreds of people," Trump said at the event. "If you shoot one person, they give you life, they give you the death penalty. These people can kill 2,000, 3,000 people and nothing happens to them."

He added, "Some countries have a very, very tough penalty — the ultimate penalty — and by the way, they have much less of a drug problem than we do."

Just days before the remarks, a senior Trump administration official told Axios that Trump "often jokes about killing drug dealers . . . He’ll say, 'You know the Chinese and Filipinos don’t have a drug problem. They just kill them.'"

Couple the comments with his previously reported conversation in which he praised Philippines President Rodrigo Duterte's handling of drugs in his country, and the reality quickly turns harrowing. The international criminal court launched an inquiry into allegations of crimes against humanity committed by Duterte earlier last month, due to his brutal nationwide drug crackdown, in which he's been accused of "extrajudicial executions and mass murder" of thousands of people.

"I just wanted to congratulate you because I am hearing of the unbelievable job on the drug problem," Trump told him in a leaked transcript of their phone conversation in May of last year.

In other words, Trump's position is less about stopping people from getting illegal drugs and more about enforcing a tough-on-drugs stance in the mold of Jeff Sessions.

"That will happen," Trump said. But defense attorneys have likely said this move by the Trump administration is highly unlikely to come to fruition.

"While it is difficult to assign motives to an act of the DOJ, this is a PR move, not a sincere attempt to address the opioid crisis," attorney David Cattie told NBC news.

In order to properly combat the opioid epidemic in America, politicians must challenge the powerful and influential pharmaceutical industry, which has spent more than any other to wield power over Washington. Americans make up about 5 percent of the global population yet consume 81 percent of the world's oxycodone products. That statistic alone should exemplify how uniquely American this problem is.

The time has come to aggressively launch a multi-pronged effort to both ease the opioid epidemic in the country and pursue accountability for those primarily responsible — not people crossing the border, but powerful industry executives.