Dr. Farha Abbasi breaks down the danger this presidency poses to mental health 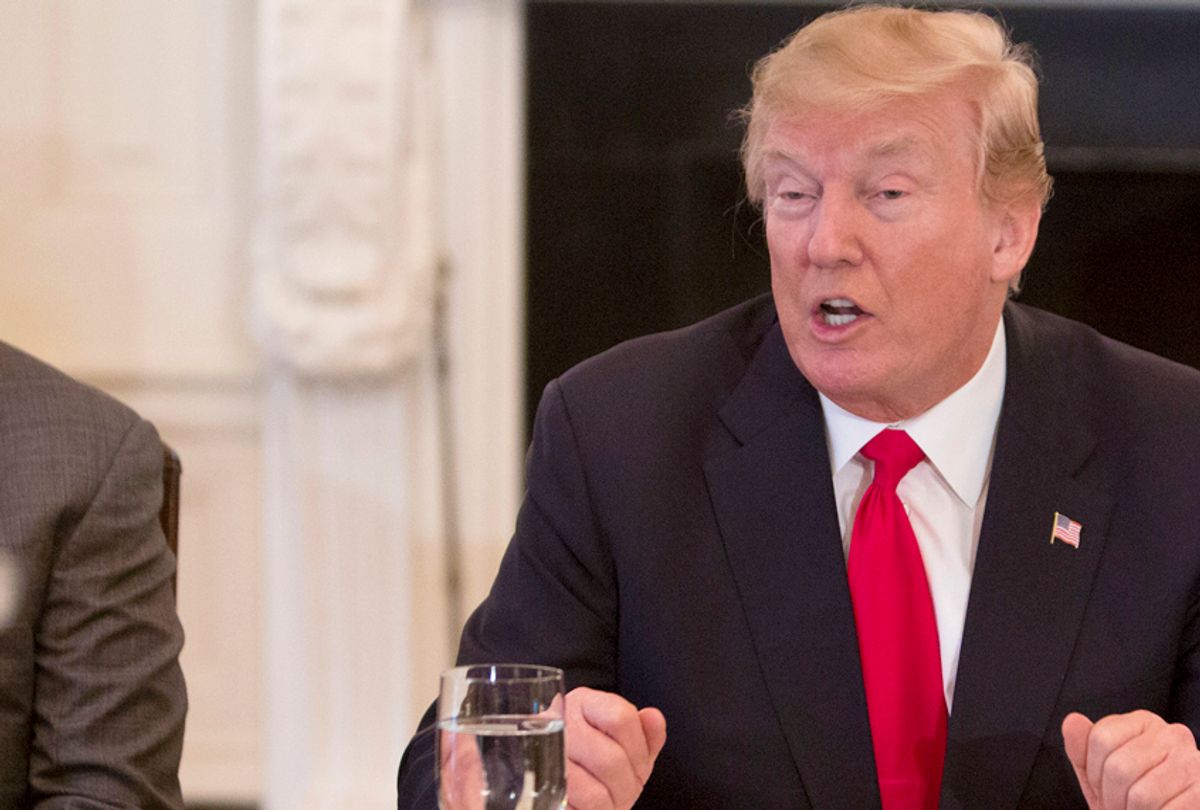 Islamophobia was an issue in the U.S. long before Donald Trump took office, but this administration has worked hard to help spread the disease. Since Trump’s electoral win, 18 state legislatures have introduced 23 totally unnecessary anti-sharia law bills. Anti-Muslim violence has been on a steady rise. An unambiguous ban on Muslims from six countries — which candidate Trump made clear was a “Muslim ban" — is actually in effect. And among the other racist materials he's fond of, Trump regularly retweets anti-Muslim propaganda put out by white supremacists the world over.

This all adds up to an attack on Muslims in America, and people's mental health often ends up in the line of fire. Michigan State University psychiatrist Farha Abbasi has been examining the psychic toll of America’s Islamophobia for nearly 20 years. As the director of the Muslim Mental Health Conference and managing editor of the Journal of Muslim Mental Health, she has genuine concerns about the impact of politically convenient hate messaging in the lives of Muslim-Americans — and in the lives of those perpetuating the cycle of hate. History shows that the normalization of that toxicity can have horrific ends. “This is how your mind learns to accept atrocities,” Abbasi says.

I spoke by phone with Dr. Abbasi, who recently earned an award from the National Alliance on Mental Illness for her groundbreaking mental health work with the Muslim community. She offered insights on the manipulation of Muslim identity as a political tool, the trauma caused by anti-Muslim policies, and what it means to be doing such critical work in this often dark moment.

Kali Holloway: I know you immigrated to the U.S. from Pakistan in 2000 — an election year — but since then you've been witness to four presidential elections. Can you talk about the differences you've seen in terms of psychological impact, especially in regard to the 2016 presidential elections?

Farha Abbasi: Absolutely. One simple way of putting it is, previous elections have been about hope, progress and going forward — a sense of belonging. But now I’ve seen people going from a sense of high hopes to a sense of despair. And the despair has been really deep. I can say that whatever we were fearing [about a Trump presidency], the outcomes are looking much worse than what was even in our worst imagination.

KH: Let’s talk a little about that. As far back as 2015, you surveyed imams in Michigan and found that 'one of the biggest stressors that they are facing is the political atmosphere and media coverage.' Obviously, that hasn't let up and things are only looking darker now. Can you talk about how this presidency has taken that Islamophobia, which was already a real problem, and exacerbated people's fears and concerns?

FA: Let's start with the children, okay? Because I think youth are our future, and the biggest concern I have is how this is going to affect Muslim youth. We are seeing right now that Muslim children are twice as likely to be bullied as an “average” American kid. These bullying incidents are not only happening by their peers, it's also happening from teachers and professors. It's also not only just verbal. It's cyberbullying. It's physically aggressive acts from hijab pulling to kids coming home with bruises and fractures. It's very direct identity-based aggression that we are noticing.

The number of incidents of hate crimes [against Muslims] have doubled. Developing brains are now persistently exposed to toxic stress. That exposure not only impacts you physically and changes your physical health, it alters your mental health. It changes the brain structure, it changes brain connectivity, it impacts your neurons. So we will be seeing a huge negative impact if something is not done on a proactive basis.

KH: Sadly, whether this president is in office for three more years or seven, there may be long-term consequences, including mass trauma. Do you have any idea of how that might look 15 or 20 years from now, for people from vulnerable communities?

AF: We already know what happened to Native Americans. We have seen the results. We are seeing the results in the black population in this country. If you look at the trauma studies coming out, what they tell us is that when you are exposed to this kind of trauma, even your cognitive abilities are affected. The ability to focus, concentrate, create attachments. Not just your academic outcomes can be affected. Your relationships can be affected. Your social-economic status can be impacted.

A lot of the Muslim population [in the U.S.] right now is African American. They are suffering trauma in two ways. They face racism and all the consequences that come with it, and then also Islamophobia. That has a huge impact on our community. Then you have immigrant settlers whose kids are being impacted by all these anti-immigrant policies, like the Muslim ban. If we look at the bigger picture of the world, they may have families or friends back home who remain in conflict zones — the majority of world conflicts right now are either in Muslim countries or involve Muslims. So if you look at the internationally displaced or those in exile or those in a state of refugee, the Muslim population is very high in numbers.

From a terrorism point of view, there are more Muslims being killed by these extremist groups than any other religious community. Think of it that way. On one hand, you are already being exposed to all this trauma and death. And then, you are invested in this country as a citizen, yet being held responsible for that.

FA: It is overwhelming. So, yes, we are trying to study [their trauma], and do more research into it. That's why I do so much Muslim mental health work and there’s now so many other organizations also doing this work. Because there is a real fear that if we do not overcome this now or put some protective mechanisms in place, it's going to have long-term consequences.

I think for everyone to have a sense of security, a feeling of belonging is key. You cannot feel secure if feel you are made into the "other” — if everybody has you under suspicion, if your motives are constantly being questioned, if you are bombarded with the message that there that something it is wrong with being Muslim, that you have to always prove your patriotism, and your citizenship.

When we look back in history and wonder how the Holocaust could happen or how we allowed genocides or slavery to happen, we must know that when you dehumanize someone to just a word, a label, an object, people stop seeing that they are dealing with another human being. It creates a sense of apathy — the idea that it's happening to the "other," so the other must have done something to deserve it.

KH: And it opens the door for atrocities.

FA: Right. So if you look at the previous election cycle, “Muslim” was no longer an identity, it was a word. It was a political tool. It was open to be used in a derogatory way.

Another example I would cite is one you can find on Harvard's implicit association test. What happens is, our brains kind of consolidate memories by associating certain ideas with certain words, right? So white is viewed as “pure.” This was pointed out by Dr. Martin Luther King — that they associated black with everything ugly and bad, when black is actually beautiful. In the same way, they have made “Muslim” synonymous with something wrong, something that is not patriotic or something that is foreign.

KH: You mentioned the idea of Muslims as innately foreign or the 'other.' That’s partly just an outgrowth of this longstanding idea that 'Americanness,' in and of itself, only looks and worships a certain way.

FA: Completely. Another interesting thing is, when you create fear and phobias, it's not only one side that suffers. It's not only the people that the phobias are directed toward who are impacted. The person who is extending that fear is also deeply impacted.

When you create phobias and fear and the idea that there’s a certain way that Americans should look, you are doing a disservice to society. You're creating rifts and divisions. That's the most important lesson to learn. That there is not one class that will be safe and another class that will be affected. Ultimately, it's going to affect all of us.

KH: Do you have any advice for people about how to talk to children to allay their fears — especially kids from vulnerable communities, people of color, Muslims?

FA: It is hard. I think the most important thing is you have to continue to communicate with them. Hear their fears, validate them when they bring information home that has made them uncomfortable. Don't negate it. Validate it. Assure them.

Studies show that the kids who do the best or thrive best are those who can navigate their bicultural identity: find that middle point where they are not giving up being an American or are not shying away from being Muslim. We want kids to understand this is our country. We are invested in it. We love it. All our [mental health and other] initiatives and interventions have to be from that point of view: that this is our home, and this is a problem that's happening in our home to us. But not to be alienated.

Also, be aware of your rights as a citizen or as a settler or as a minority. Another important thing is be engaged. You have to be very engaged in the process. Same goes for your religion, because part of your resiliency is being comfortable in your cultural religious identity.

KH: Does it feel particularly important to you to be a practitioner who is a woman, an immigrant and a Muslim, serving in this capacity? I wonder what it means for you to be a psychologist with all of those intersecting identities coming together right now in this moment and helping people.

FA: How do I best put it? Sometimes your purpose finds you. I'm very humbled and very grateful for this opportunity to be here at this moment, at this time. As a psychiatrist, I could have been doing something else. Somebody once asked me, why do you want to restrict yourself to the community work? And I don't restrict myself because I'm a big advocate of mental health in general, and I work towards that, too. But you know, the age-old saying that, if not me, then who? If not now, then when?

I feel this is a calling. It's a privilege to be doing this work at this point in history. But, I do have — I call it three strikes against myself. Being a minority, woman and Muslim. But that's where I draw my strength as well. All those intersectional identities give me this unique perspective to be in this point in the history.

I think the most important thing is we cannot let apathy set in. This is a moment to be woke, alert and engaged. Be it mental health, be it politics, be it civil rights, be it women's rights. This is our time to own our citizenship, own our identities. Own our country.