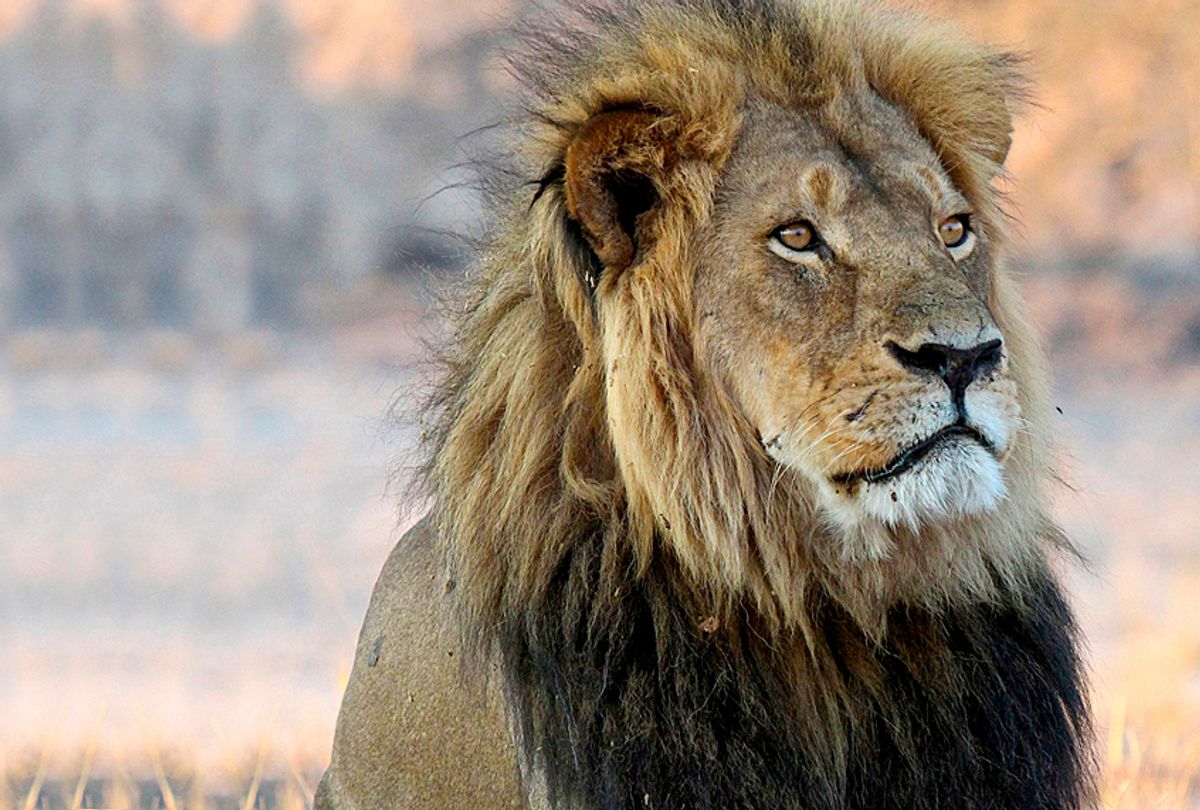 The death of Cecil the Lion in 2015 sparked an international outcry from animal rights activists, conservationists and ordinary people who had grown to love the Zimbabwean large cat.

Now a new book by Andrew Loveridge, a biologist at Oxford University who studied Cecil for eight years, reveals the heartbreaking tragedy of the majestic animal's final, agonizing hours.

The information comes from an excerpt in Loveridge's new book "Lion Hearted: The Life and Death of Cecil and the Future of Africa’s Iconic Cats," which appears in the magazine National Geographic. After describing how American dentist Walter Palmer worked with a local hunter named Theo Bronkhorst to lure Cecil with an elephant carcass out of a protected area, then shot him with a bow and arrow, Loveridge goes into detail about how the mortally wounded Cecil languished for 10 to 12 hours.

In media reports it was widely touted that Cecil suffered in agony for 40 hours. This claim is inaccurate and exaggerated. It’s unlikely he’d have lived that long with such a severe thoracic injury. However, he most definitely did not die instantly and almost certainly suffered considerably. Judging from the events described by Cornelius and the data sent by the GPS collar, the injured lion most likely was killed 10 to 12 hours after being wounded.

Cecil suffered incredible cruelty for at least 10 hours, severely wounded and slowly dying. Cornelius recalled hearing the animal “struggling to breathe.” Clearly, although the wound was severe, the arrow had missed the vital organs or arteries that would have caused rapid blood loss and a relatively quick death. Certainly, the lion was so incapacitated that in all those hours he’d been able to move only 350 meters from the place where he was shot.

While it is impossible to know why Palmer and Bronkhorst didn't kill Cecil as soon as they realized he had been injured, Loveridge speculated that it may have had something to do with Palmer's desire to brag about having killed a lion with a bow and arrow.

Perhaps part of the explanation is that Palmer was hoping to submit this obviously large trophy to a hunting record book as a bow-hunted specimen. This precluded the use of a firearm to dispatch the animal, as that would render the trophy ineligible as a bow-hunt record. One possibility, therefore, is that the hunters were content to leave the lion to die from its first catastrophic injury with no further intervention. When the lion didn’t oblige them, they were presented hours later with the inconvenience of shooting it with another arrow. If this was the case, Cecil the lion died slowly and painfully to allow a hunter the ultimate vanity of claiming he had killed a huge lion with a bow and arrow.

Loveridge also makes it clear that Palmer and Bronkhorst felt emboldened by their success in hunting a lion, to the point where they were willing to break an important poaching law after they had finished the deed.

According to Bronkhorst, after the successful lion hunt, the American asked whether “[they] would find him an elephant [with tusks] larger than 63 pounds.” Elephant trophies are traditionally measured by the weight of the largest tusk.

As Bronkhorst himself noted, this would require a prime-age elephant of a size that’s increasingly rare across Africa. Bronkhorst, perhaps regretfully, had to tell the avid hunter that he couldn’t find such a large elephant. It should also be noted that as of April 2014, the U.S. Fish and Wildlife Service had banned all imports of elephant hunting trophies from Zimbabwe under the Endangered Species Act. This ban was still in place in 2015. If Palmer had succeeded in killing a giant pachyderm, it’s unclear how the collector of exceptional trophies planned to get the ivory home.

Several days would pass before the world learned that Cecil had been killed. One creature who did know right away, however, was one of the few other pride leaders in that area — a lion named Jericho who had spent several nights calling out in vain. Local camp staff believed he was trying to find his close friend Cecil.