Are Republicans finally turning on Trump? If so, it could be too late 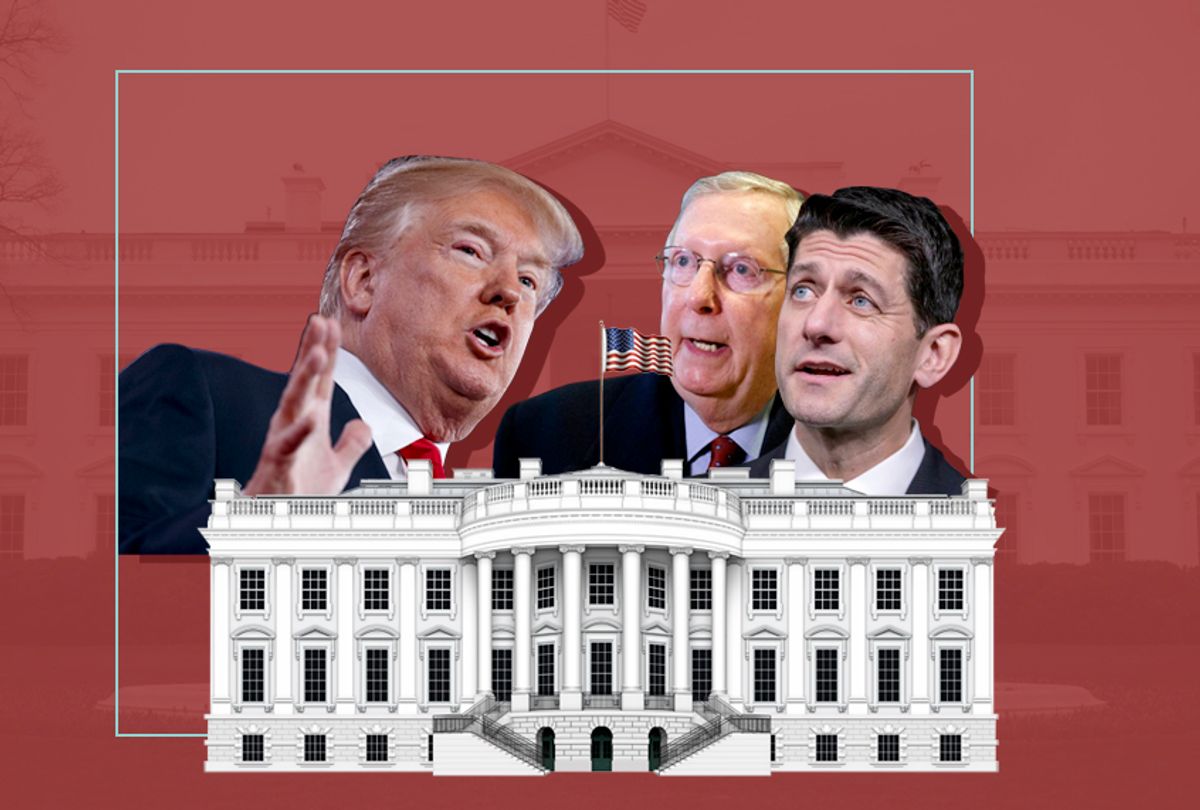 One of the more revealing dramas of the past year has been the spectacle of the Republican Party weakly wrestling with the Donald Trump phenomenon and then deciding to accommodate this erratic incompetent in the hopes that they could steer him toward pillaging the nation's shared wealth, their raison d'être. Republicans have so far been unable to repeal the Affordable Care Act, but they have successfully sabotaged it in numerous ways. Most important of all, they got their big beautiful tax cuts and have set federal agencies to stripping the nation of rules and regulations that serve the common good, so they have been more than satisfied with their decision.

Nonetheless, Trump is very high-maintenance, with all the craziness and misbehavior and legal problems. A handful of Republicans may even feel a bit restless at night, knowing they've enabled an immoral and unstable leader who is making America into a pariah nation, but for the most part they've made their peace with him for the sake of reckless economic plunder. There was no raging against the dying light of conservative movement ideology for them. And never say Republicans don't know how to compromise. They've compromised their entire so-called belief system.

Over the past couple of weeks, something has changed, however. The endless news stories and White House pandemonium has ended the tax cut euphoria. Trump has been even more erratic than usual, sending out disturbing tweets that simply say "WITCH HUNT!" and the constant drama and staff turnover has reached a crescendo. Still, GOP leaders were obviously prepared to deal with all that for the sake of shredding the safety net -- at least until Trump finally went too far. He abruptly announced that he would follow through on his campaign promise to raise tariffs on imported steel and aluminum and make the rest of the world "stop laughing at us."

Both Paul Ryan and Mitch McConnell actually spoke up to object, however mildly, and Trump's top economic adviser, Gary Cohn -- a former Goldman Sachs banker and a Democrat -- resigned in protest. John King of CNN said on his show Wednesday morning that a top Republican source told him:

He is making losing the majority more likely by risking economic growth through higher prices and higher interest rates. He is creating the reality for his impeachment in the House.

We cannot know how tariffs will affect average voters, but that comment shows Republicans are hoping that Trump's disapproval rating will be overshadowed by the strong economy, at least enough to save their majority in November. That's understandable. It's all they've got.

But they had better get used to Trump throwing out even wilder policies. These tariffs didn't come about because of some deliberative process. By all accounts, the loss of staff he trusted, in this case Rob Porter, has left him with less and less restraint and he's just going with his gut.

That situation is unlikely to improve if Trump promotes someone like Peter Navarro, the eccentric economist who was hired onto the campaign after Trump asked Jared Kushner to find him a China expert. (According to Vanity Fair's Sarah Ellison, “Kushner simply went on Amazon, where he was struck by the title of one book, ‘Death by China,’ co-authored by Peter Navarro.") There's talk of bringing in hard-line foreign policy extremist John Bolton to replace National Security Adviser H.R. McMaster when he leaves, as expected, in the next few weeks. Even Anthony Scaramucci is back on the scene, reportedly being encouraged by the president to trash-talk White House Chief of Staff John Kelly. These are not people one can expect to guide Trump in a sensible direction.

Cable news talkers keep noting that the White House is still as undisciplined and chaotic as it was in the early days and that Trump has not grown into the job. He won't listen to his own lawyers -- on Wednesday, The New York Times reported that Trump has been asking witnesses what they've told Special Counsel Robert Mueller, something he's surely been admonished not to do, to avoid any appearance of witness tampering or manipulation. As the stress builds up over everything from the Mueller investigation to the Stormy Daniels sex scandal, and his closest aides and trusted confidantes are sidelined or dismissed, Trump is becoming more undisciplined.

Unfortunately, Trump may actually have learned something over this past year that makes him even more dangerous. He may have figured out that the president of the United States has a tremendous amount of inherent power that does not require the approval of either party in Congress or the government bureaucracy. This tariff decision shows him how easy it is for him to just pop off to some reporters in a press appearance that he's made an important decision and spark a political crisis.

Trump now knows that the Republicans in Congress are all wimps who will eventually capitulate. For the time being, the Democrats have no institutional power and cannot stop him, and it's hard to imagine that he could possibly face any legal jeopardy that's worse than what he's already facing. The courts have slowed him down on a number of issues, but he's gotten most of what he wanted in his Muslim ban and there is little reason to believe he's going to lose much in the Supreme Court. Even the banning of transgender recruits in the military -- which, like many of Trump's decisions, was an impulsive act based on something he saw on TV -- hasn't been completely withdrawn. A federal judge has ruled that the military must accept recruits regardless of gender status, but Defense Secretary Jim Mattis has just given Trump his latest proposal, so it's still a live issue.

Just this week Trump threatened to pull all federal immigration enforcement from California, which he theoretically could do if he wanted to. But where a president has the most unilateral power is in the area of national security. Until now, Trump has been ranting and raving but hasn't actually done much besides order an airstrike in Syria and drop a big bomb in Afghanistan.

His rhetoric on tariffs, however, has been instructive. He keeps saying that trade wars are good and that they are easy to win. He clearly hungers to mix it up and teach somebody who's boss, and has now realized that he can take that action all on his own. It's only a matter of time before he recognizes that he can start a real war exactly the same way. The more desperate he gets, the more likely he is to do it. There may be no one left in the White House who would even try to talk him out of it.