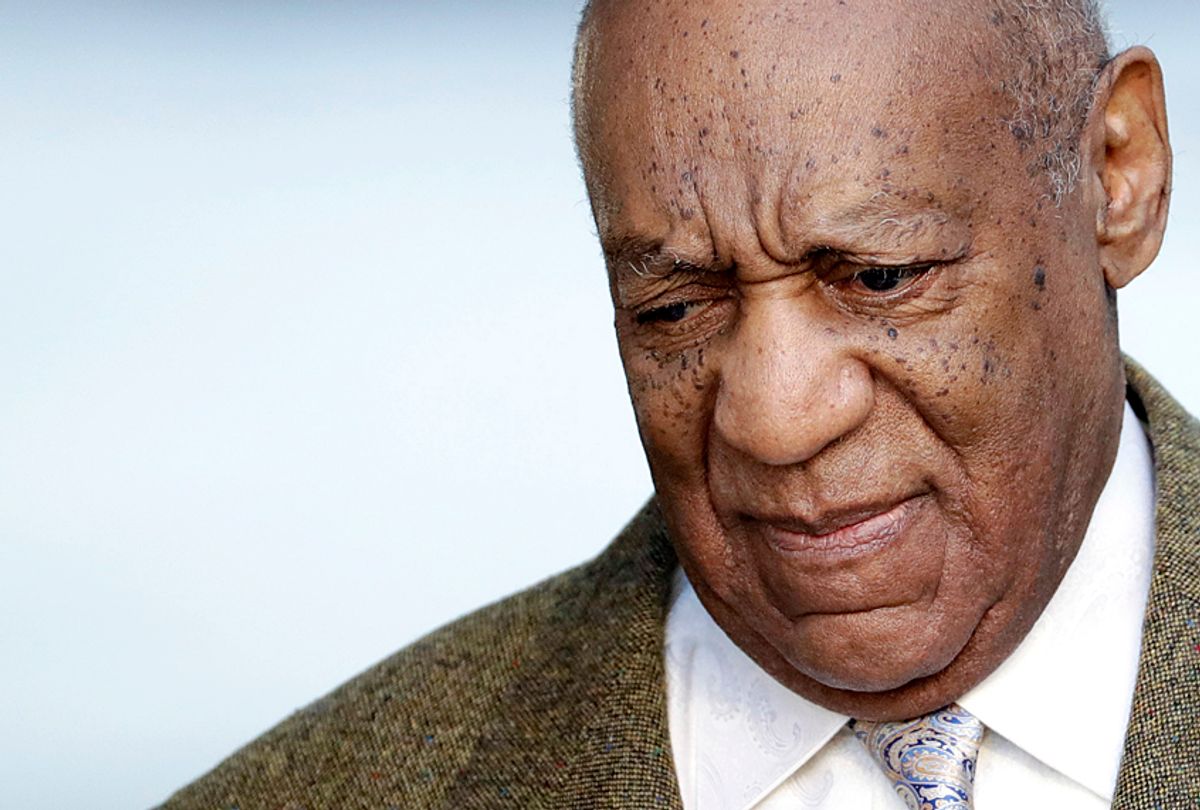 This week Bill Cosby, accused of sexual assault by more than 50 women, returned to court for hearings to determine if new or additional evidence will be allowed during his retrial for sexual assault charges.

In the era of #MeToo, where a series of allegations, typically three or more, has often made the difference between the presumption of guilt and the presumption of innocence, prosecutors are asking the judge to permit the testimonies of 19 additional Cosby accusers. This number still represents just a fraction of those who have come forward with allegations.

Last year Cosby was tried for sexually assaulting Andrea Constand in 2004. For the last 13 years, Constand has maintained that the comedian drugged and assaulted her. In previous testimony, Cosby admitted to having sexual relations with Constand, but said it was consensual. During this original trial, Montgomery County Judge Steven T. O’Neill allowed only one other accuser to testify. And after the  jury deadlocked in June, a mistrial was declared.

The retrial, set to begin in April, regardless of new evidence, will likely be inflected with new meaning, as it comes at a time when women and men are demanding the entertainment industry address systematic sexual harassment and violence by some of the the most powerful men in the business — a fraternity which Cosby once certainly belonged. The prosecution and the defense are acutely aware of the weight of this reckoning.

"With the current atmosphere, it’s going to be hard enough to get the jury to focus on the trial at hand," defense lawyer Becky James said Tuesday, warning of a hemorrhage from #MeToo into the courtroom. "But bringing in additional accusers — especially 19 of them — in that environment would be highly prejudicial."

Prosecutors countered, "The truly unique nature of [Cosby’s] sadistic sexual script is manifest in the similarities between the acts he enacted with Ms. Constand and the 19 other women," Assistant District Attorney Adrienne D. Jappe said. She said, with each woman and case, Cosby came into their lives as a mentor, and then would offer them drugs and assault them.

This back and forth played out ahead of the pretrial hearings as well. In court filings, the defense team wrote that the current climate is "increasingly hostile, and the jury pool is likely to be infected with prejudice." Montgomery County District Attorney Kevin R. Steele filed in response that Cosby, "after casting blame on everything but his own conduct and everyone but himself, now claims Harvey Weinstein is to blame for his continued prosecution." He also added that as in Hollywood and in media, the tally of women accusing Cosby is central to the case against him.

O'Neill said he did not feel restricted by his past ruling to admit only one additional accuser's testimony and that his decision would entail "exhaustive" research, according to the Philadelphia Daily News. He is expected to decide as early as next week on the question of how many, or if any, of Cosby's other accusers will be allowed to testify in April.

The defense's scapegoating of #MeToo is not unprecedented. Since its tidal wave crashed into the mainstream, there has been considerable backlash against the movement. For every celebration of Time's Up and for all the very public popular support for women coming forward, there has been equal protest about a "witch hunt" and the elimination of "due process."

Only a handful of men have actually faced serious consequences for their actions, and by serious, I mean they've been fired from the powerful positions that facilitated the abuse they committed. These men — Harvey Weinstein, Matt Lauer, Kevin Spacey, Bill O'Reilly, Charlie Rose — were the ones accused of sexually harassing or assaulting multiple women and exhibiting patterns of abusive behavior. The Establishment writer Ijeoma Oluo explained, "if there’s anything these stories show, it’s that these men in their years of open abuse were given more than just due process  —  but the women, many of whom had tried bringing this abuse to those in authority years before, were given no process at all."

The outcry, in many spaces, has been met with a knee-jerk reaction to restore the hierarchy and prioritize the accused over the victim. For some, the considerable, often overwhelming, number of stories did not illuminate a pervasive culture of sexual violence, but a moral panic for fear of casting away the men at the center, especially if they are creative and regardless if they are harmful.

This was demonstrated at the Oscars Sunday when Kobe Bryant, accused of rape in 2003, was awarded an Oscar, as was Gary Oldman, accused of domestic violence. My colleague Mary Elizabeth Williams wrote: "Sunday's victory lap for men who've faced accusations of abhorrent violence against women make it clear that for much of the industry, it's still less #TimesUp and more business as usual." The most significant consequences we have seen thus far is the damage and in some cases, likely destruction of the legacies of these accused predators.

It is true that a public reckoning is is increasingly likely these days. As soon as Bryant was presented with an Oscar, social media brought up his rape accusation and lawsuit — but as a way to show that so little has actually changed. They say a rape allegation will ruin a man's career. It usually never does.

That is why the alarm from Cosby's defense team about this "increasingly hostile" climate and the prejudice that #MeToo will bring to the case is, at best, overly dramatic. If the public has a more complete understanding of criminal sexual behavior, that is progress, not bias. And if Cosby is convicted this time around, it won't be because #MeToo panic unfairly crept into the courtroom and swayed a jury, but precisely because of due process.