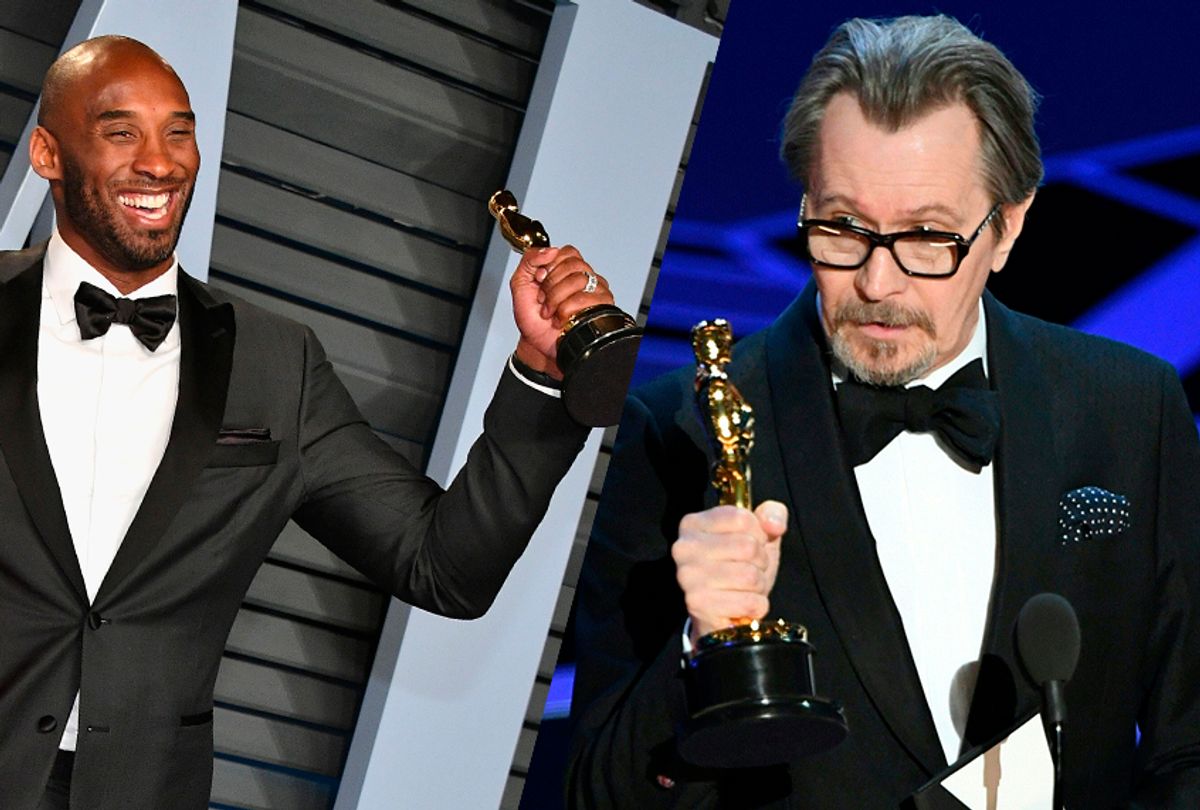 A year ago, the world watched uncomfortably as Brie Larson handed Hollywood's highest accolade to Casey Affleck, a man accused of sexually harassing behavior and named in two lawsuits. Oscar has always danced happily with accused abusers, including Roman Polanski, Woody Allen and Harvey Weinstein. But after the explosive momentum of the #MeToo and #TimesUp movements over recent months, this year promised to be different. And then the exact same thing happened again. Do you know exactly what newly minted victors Kobe Bryant and Gary Oldman have been accused of? Because it's horrifying.

On Sunday evening, Bryant shared the Oscar for best animated short for his work on "Dear Basketball." He told viewers, "As basketball players, we are really supposed to shut up and dribble. But I am glad we do a little bit more than that." Bryant also thanked his wife Vanessa for her support.

The NBA legend has indeed done more than dribbling. Like settling lawsuits. In 2003, Bryant was arrested after a 19-year-old hotel employee accused him of rape. Bryant initially denied everything, until police told him they had physical evidence of semen — and blood. Then he insisted it was a consensual extramarital encounter.

The woman claimed she had given him a tour of the hotel, then went back to his room. They kissed, but when when she tried to leave, she said, "That's when he grabbed my neck. And at that point I was just looking at him, didn't know what to do, didn't know what to say. Then he held me by my neck and physically forced me over to the side of the couch."

The woman's identity — as well as details of her sex life — were soon leaked to the tabloids, and she stopped cooperating with authorities. Criminal charges against Bryant were dropped, but the accuser later brought a civil case that was settled out of court. After the charges were dropped, Bryant issued a statement that read:

First, I want to apologize directly to the young woman involved in this incident. I want to apologize to her for my behavior that night and for the consequences she has suffered in the past year. Although this year has been incredibly difficult for me personally, I can only imagine the pain she has had to endure. I also want to apologize to her parents and family members, and to my family and friends and supporters, and to the citizens of Eagle, Colorado. I also want to make it clear that I do not question the motives of this young woman. No money has been paid to this woman. She has agreed that this statement will not be used against me in the civil case. Although I truly believe this encounter between us was consensual, I recognize now that she did not and does not view this incident the same way I did. After months of reviewing discovery, listening to her attorney, and even her testimony in person, I now understand how she feels that she did not consent to this encounter. I issue this statement today fully aware that while one part of this case ends today, another remains. I understand that the civil case against me will go forward. That part of this case will be decided by and between the parties directly involved in the incident and will no longer be a financial or emotional drain on the citizens of the state of Colorado.

It was an acknowledgment that no, this woman wasn't in it for the money, and that whatever Bryant says he thought at the time, she did not view the encounter as consensual. Bryant then went on to enjoy the rest of a lucrative, successful NBA career and win an Academy Award. In 2018. ¯\_(ツ)_/¯

Gary Oldman has been similarly charmed despite his own ugly history. In 2001, his estranged wife Donya Fiorentino filed papers claiming that during a domestic dispute, "As I picked up the phone to call the police, Gary put his hand on my neck and squeezed. I backed away, with the phone receiver in my hand. I tried to dial 911. Gary grabbed the phone receiver from my hand, and hit me in the face with the telephone receiver three or four times. Both of the children were crying."

Oldman said at the time that Fiorentino's statement was "replete with lies, innuendoes and half-truths." This is also the same guy who once groused in a Playboy interview that "If I called Nancy Pelosi a c**t — and I'll go one better, a f**king useless c**t — I can't really say that. But Bill Maher and Jon Stewart can, and nobody's going to stop them from working because of it." When his name was announced on Sunday, Oldman received a standing ovation.

What men do to women behind closed doors often comes down to conflicting accounts, and there is a very small number of people in the world who know what actually went down with Bryant, Oldman and the women who accused them of abuse. Nor do the attitudes and behaviors of either man mitigate their talents. But if you want to put on a big show that literally devotes an entire segment to how things are changing in the entertainment industry and brings out a trio of women — Ashley Judd, Annabella Sciorra and Salma Hayek — whose livelihoods were kneecapped by Harvey Weinstein's gross, vindictive behavior, you might want look around at the context. Is putting Ryan Seacrest, a man recently accused of sexual harassment, on the red carpet still a super hot idea? Is celebrating accused stalker and harasser John Heard in the In Memoriam montage a good look right now?

Hollywood has undoubtedly made strides toward bringing the issues of abuse and harassment into the open — and in some cases even imposing serious consequences for bad behavior. But Sunday's victory lap for men who've faced accusations of abhorrent violence against women make it clear that for much of the industry, it's still less #TimesUp and more business as usual.