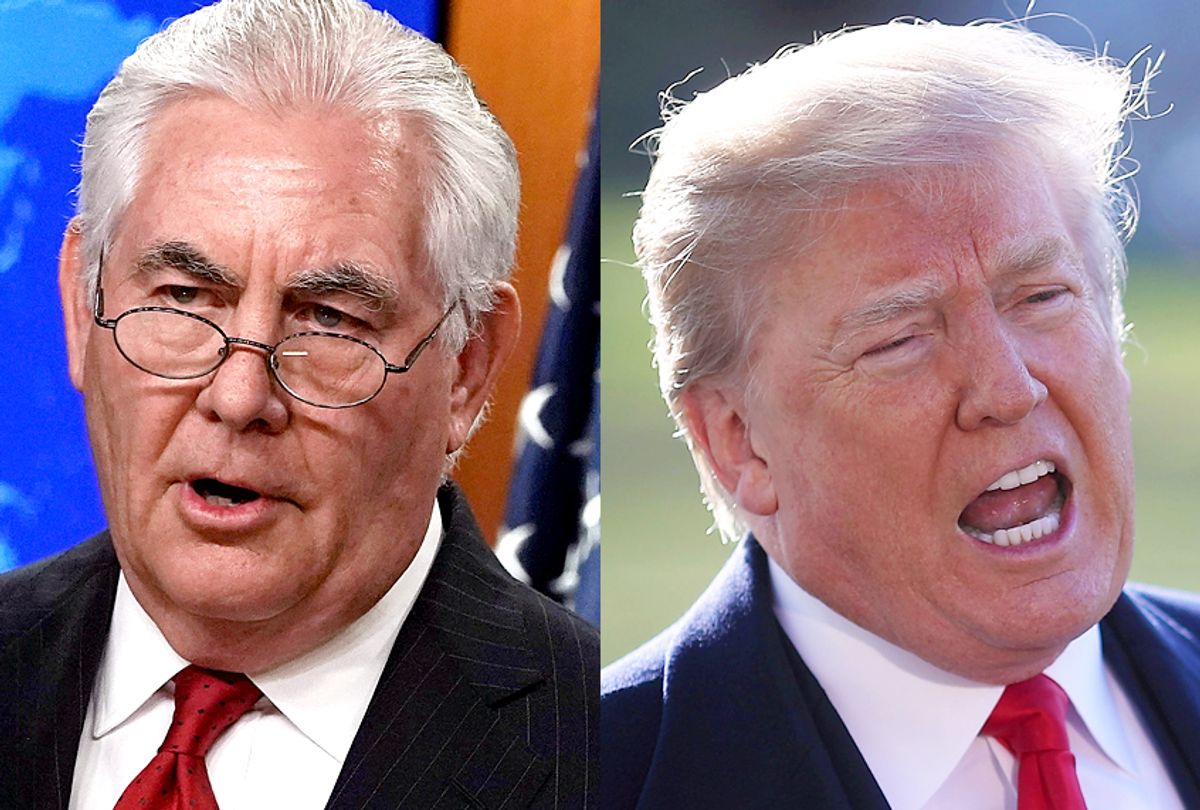 Secretary of State Rex Tillerson allegedly got his pink slip in the form of one of President Donald Trump's infamous early morning tweets. It's the latest in a revolving door of dramatic exits from the Trump administration, which already had a record-high turnover rate.

On Tuesday, Trump tweeted that he was nominating current CIA Director Mike Pompeo to replace Tillerson. Gina Haspel, Pompeo’s controversial deputy who allegedly oversaw a secret CIA prison linked to torture, will in turn be nominated to lead the nation's top intelligence agency.

In true Trump administration fashion, Tillerson’s sacking spiraled into a chaotic mess as starkly different accounts were brought forward by the key players who were involved. The dismissal was reportedly unexpected, and at least one additional federal employee found himself caught in the crosshairs after presenting a version of events to the public that differed from President Trump's own story.

A senior State Department official told NBC News that Tillerson first learned he had been fired when Trump announced his decision on Twitter. Steve Goldstein, the former under secretary of public affairs at the State Department, said in a statement that Tillerson's firing was not voluntary and that he had "every intention of staying because of the critical progress made in national security."

Various reports, however, indicate Tillerson may have first learned of his imminent dismissal from White House Chief of Staff John Kelly while traveling in his official capacity in Africa on Friday.

Hours after cleaning up the mess of his boss being sacked, Goldstein found himself facing the same fate. "I wish everyone well, and look forward to getting more rest and perhaps winning an indoor rowing competition. We will see what happens next," Goldstein later said in statement to CNN.

Goldstein was reportedly let go after contradicting the White House's narrative of how Tillerson was fired. Indeed, on Tuesday morning, Trump told reporters the departure had been planned. "Rex and I have been talking about this for a long time," the president said.

Trump also made it clear that Tillerson and he were "not really thinking the same" and "disagreed" on key issues, the Associated Press reported.

A defeated Tillerson did not hesitate to bring up one of Trump's least favorite topics as he spoke to reporters about his exit: Russia. His official last day will be March 31, per CNN.

"Much work remains to respond to the troubling behavior and actions on the part of the Russian government," Tillerson said, according to NBC. "Russia must assess carefully as to how its actions are in the best interest of the Russian people and the world more broadly. Continuing on their current trajectory is likely to lead to greater isolation on their part – a situation which is not in anyone's interest."

A shake-up in the State Department could provide clues as to how Trump plans to approach his talks with North Korean leader Kim Jong-un. As Heather Digby Parton described in a recent column for Salon, Pompeo is a Rapture-believing evangelical Islamophobe who has extolled torture.

Tillerson, who succeeded John Kerry to become the 69th U.S. secretary of state, reportedly had a tumultuous relationship with Trump and disagreed with his commander-in-chief on a wide menu of issues. Tillerson allegedly called Trump a “moron” after a July meeting, and he did not deny that report.