Mira Sorvino: "Women have less protection under the Constitution than gun owners" 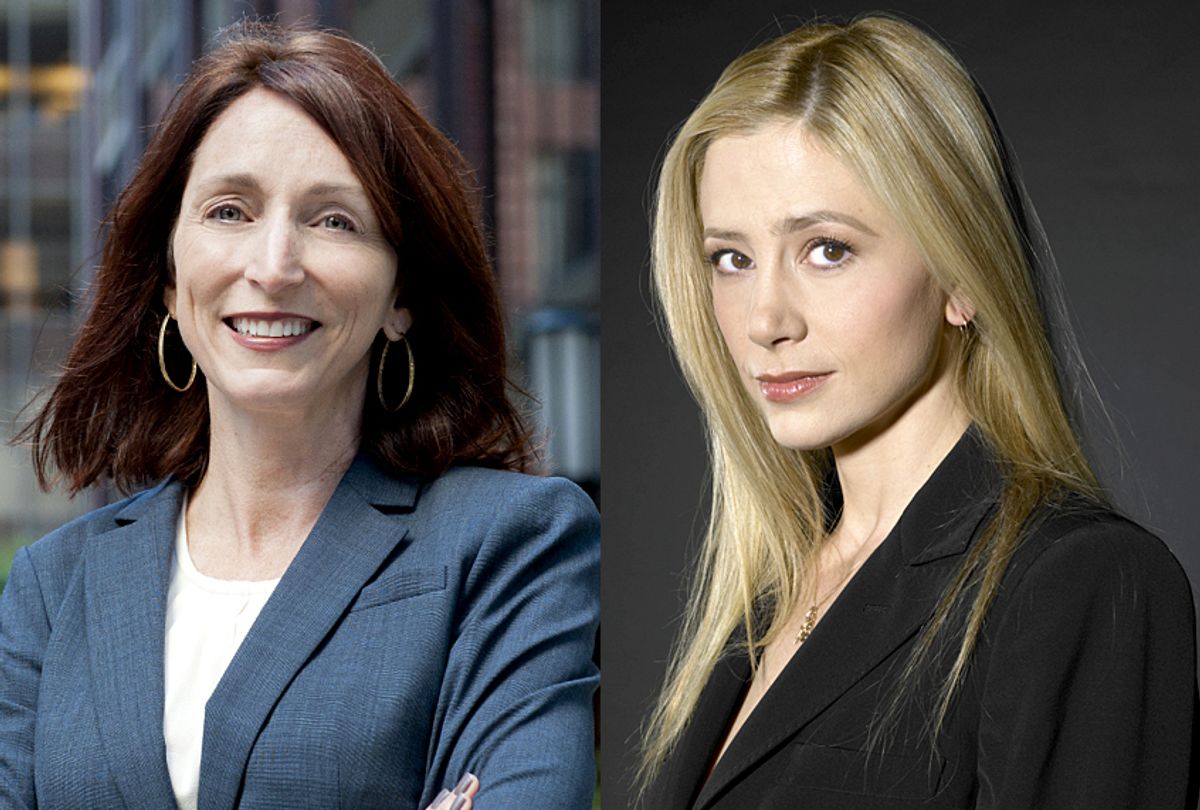 The revelations of sexual harassment and abuse that have exploded out of Hollywood — and then every other industry as well — over the past few months have led to some high-profile firings and a wealth of solidarity. But another critical part of the movement is assuring that workplaces now become safer environments for everybody. And that involves genuine change.

Given her own history of advocacy and her candid revelations of her experiences inside the industry machine, it's not surprising to see that Oscar-winning actress Mira Sorvino, along with Equal Rights Advocates' Executive Director Noreen Farrell, have teamed up with California senators Hannah Beth Jackson and Connie Leyva to enact specific legislation in their state to prevent harassment — and to make it easier for victims to have recourse when it happens. Salon spoke recently via phone with Farrell and Sorvino about how to fight abuse across all industries, and why the movement is just getting started.

Noreen, maybe you could start by telling me a little of the specifics about what's being proposed in California, and how that can be an example to the rest of the country.

Noreen Farrell: We knew that we had to really leverage the power, the interest, the desire to combat sexual harassment and violence at this very moment with a slate of bills that would be the strongest in the nation to combat those things that are so disruptive to women’s lives and their livelihoods and their ability to support their families. We looked at every single gap that we have identified over our four decades of representing women workers. So we decided we wanted to develop bills to fill every one of those gaps and promote them and drive them, because now is the time.

The bills really reflect the actual needs of millions of women workers, not just here in California but elsewhere. We know that California is a progressive influencer. We're the first state to pass paid leave law. Our California fair pay act was the strongest in the country, and after we passed that in 2015, 41 states introduced similar legislation. We really have our eye on influencing the rest of the nation with this package.

What do you think has been the biggest loophole, the biggest way that harassers have been able to slip through the cracks — and how does this legislation address that?

Farrell: We know that over 60 percent of women in the workplace experience sexual harassment, and of those, more than 75 percent never report it because they fear retaliation. Retaliation was a big theme in some of the bills that we are introducing now. There’s one bill that clarifies the current California law, which can hold a person who retaliates against someone who’s complaining of sexual harassment liable under state law. We think that will be a really powerful incentive to make sure that women are not targeted once they raise issues, not just about themselves but what they might see happening to others. Silence is a big issue that allows perpetrators to persist in the workplace.

We have a national helpline and we hear from women across the country. The reality is that most people don’t know their rights in time to file. The statute of limitation in California for sexual harassment claims — and in fact for all discrimination claims — is just one year. We have so many people call us with claims and once they’ve figured out what’s happened and they gather the emotional strength to take action, their statute has run out. We know that over 60 percent or 70 percent of the calls we get, we cannot proceed because they don’t have a legal foundation anymore. We have a bill that addresses that as well.

Also, we know that a lot of harassment happens outside traditional employment contacts. We decided to get very bold to make sure that these protections extend beyond traditional employment relationships. We have one bill, authored by Senator Jackson, that clarifies that sexual harassment is prohibited in a lot of different kinds of business relationships. There’s already a law on the books that has a catchall phrase [to include] doctors and physicians and loan officers. We are adding in investors. We have heard a lot from female entrepreneurs this year, elected officials, lobbyists, directors, and producers. We are really being clear about the kinds of business relationships that people have in which sexual harassment festers.

Mira Sorvino: Let me just jump in for a second with something specific. We held a briefing session on this slate of laws with Senator Jackson and Senator Connie Leyva the other day. It seems like one of the bills that Senator Jackson was proposing was talking about mandating anti-sexual harassment training at every level of every organization, so that every employer has to hold sessions with their employees.

Farrell: Yes. That’s Senate Bill 1300, and that's an omnibus bill that aims to strengthen all existing protections of the Fair Employment and Housing Act. It radically beefs up training requirements so it's not just supervisors or upper managers, but it’s everyone. It has a great component about how coworkers can be up to standards when they see harassment. That’s a great additional bill that covers a lot of pieces of what previously had been pretty weak parts of the law.

Sorvino: Here is what I think is so important about that. You were talking about people not having enough time and extending the statutes to three years instead of one. Once they’ve identified what’s happened to them, they have enough time to gather their materials and their courage and try and bring a suit.

I would say that many people out there don’t even know that what has happened to them qualifies as sexual harassment. I would say that for myself, with what occurred to me back in the day with Harvey Weinstein, but in even other circumstances throughout my career. There are many instances that — especially under the strengthened, more clarified definitions presented by these bills — I definitely had sexual harassment cases to press had I known that’s what it was. I didn’t understand what was happening to me. So it’s not even for other people to call out what they are seeing, but it’s for the individual victims to know that what they just experienced is actually illegal, and something that they should not stand for. It's absolutely key.

For many of us who work in entertainment, who work in media, people who work in the restaurant industry, and in tech, there are a lot of blurred lines. I want to ask about how we deal with that. How do we change the script so we do identify these kinds of behaviors and we change them?

Sorvino: I feel like the entire system — like we're talking about the entertainment, the media industry — has always put it on the young person entering it, whether it’s a woman or a man, to navigate the shoals of sexual harassment alone. The onus has been put on the individual to have to take it or to have to ignore it, or to have to somehow persevere through and rise above, get past it, and still try to pursue gainful employment that is truthful and satisfying and successful. That is so wrong. It’s so wrong that the current culture has made it all on the person who's on the receiving end of the harassment and none on the structure, the infrastructure of these industries and these companies, and these harassers. It’s kind of nuts. . . .

As an activist since 2004 — specifically [working] a lot with violence against women and human trafficking — I really have come to a point in my life where . . . awareness is wonderful but it’s one side of the coin. The other one is action. We have to take this collective outrage and feelings of indignation amongst the entire world right now with women movements cropping up, and the #metoo movement rising up against all systems of sexual harassment, and let’s make actual changes. Let’s put structures in place so legally these things cannot just persist. There is now no longer impunity for predators, and it is no longer solely for the individuals to fight all this themselves.

Someone said something the other day about dignity, and I agree too, it's about dignity but it’s in fact so much more than that. Think of all the times that I or other people in every walk of life around this country were thwarted, were not hired for something because they refused to accept a sexual advance. It is shocking how different all those lives would be, how much an economic loss it is to them and their families and how much a personal loss it is to that individual because they were not allowed to ply their professional trade on the basis of meritocracy. I find it disgusting that sexual politics shortened careers or hampered them. That’s why these laws are incredible support, because I think that we are putting in place ways people can access justice fairly quickly, and people will be far more educated to what is their right and what people cannot do to them, and what resources they have. I think this is going to shake things up and as California goes, this is something that would be good for everyone.

Mira, I saw you talking recently about the momentum of this, and people who think that this is going to go away. We have reached this point now where we are starting to see these backlash pieces and people who have been accused of harassment starting to actually slink their way back into the public eye. What can any of us do to keep this momentum going?

Sorvino: Women have less protection under the Constitution than gun owners. We still haven’t had passed an equal rights amendment in the constitution. There is so far to go. All we have done now is raise a lot of noise, which is fantastic. But now it’s the time for everyone to roll up their sleeves and get the work done for true equality, true fairness, true justice and true protection for people. We're not going to be done until every woman I know has not been assaulted or harassed or raped. I don’t know a woman who hasn't experienced something. When everyone I meet says, “No, that’s never happened to me," that's when it stops. Not before.

Farrell: We really are not done until sexual harassment stops being the price of the paycheck. I think this cultural zeitgeist has really let us get past the point of asking and questioning whether or not harassment exists. We’ve gotten to the point of, how do we make it stop? We have exposed the broader system that perpetuates and allows and profits from the devaluation of women in the workplace, not just in terms of sexual harassment — which is a really troubling barometer of how women are valued in the workplace — but also in terms of promotion and pay and opportunity and meritocracy, as Mira mentioned. We are not going to stop until we are actually done.

This slate of bills, why I’m so passionate about policy being the next next wave of our movement, is because it deals with the structure. It dismantles the structure that allows this discrimination to persist and profit from it. In some ways it looks like a little bill, but it’s a big punch in the gut of sexism to women in the workplace. We are really excited, and we hope that the rest of the country follows.

Portions of this interview have been condensed and lightly edited for clarity.