After the school walkouts, veteran activists tell students how to sustain a movement 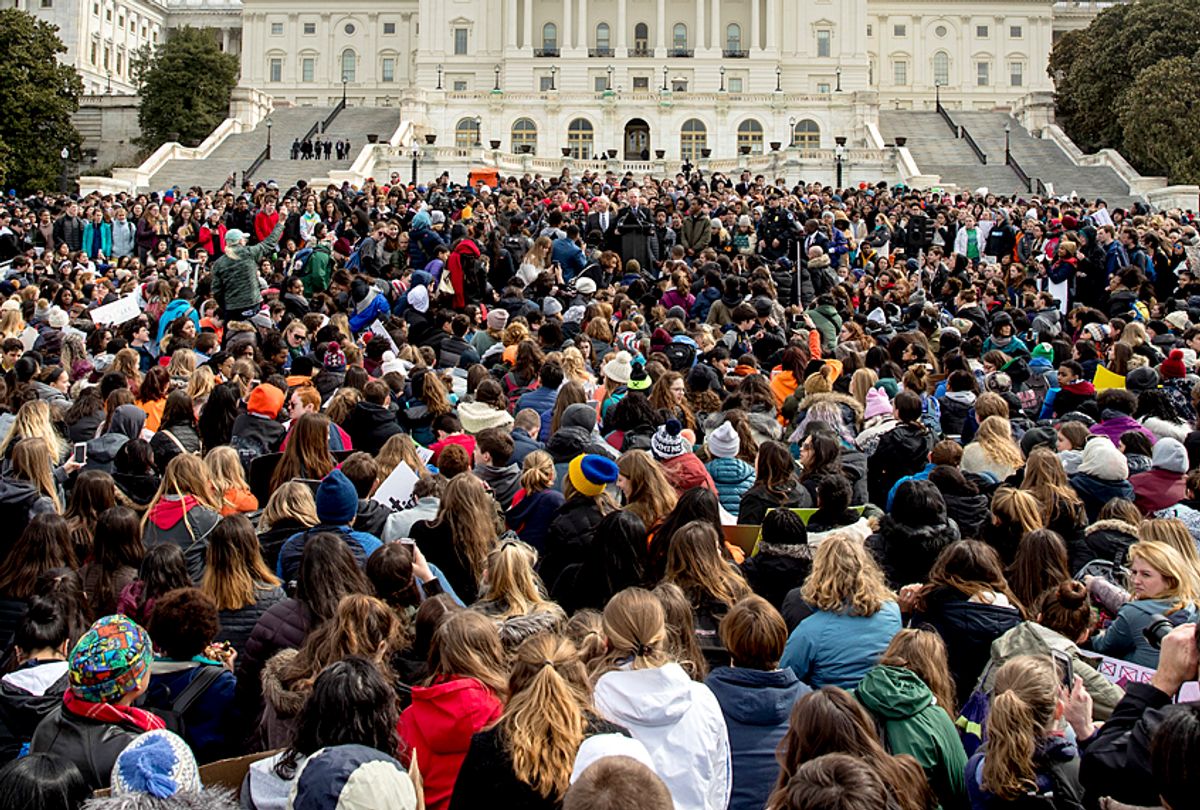 There was a 12-year-old wearing a blood orange shirt who spoke of mounting fear. There were two eighth-graders who had to stand on their tippy toes in order to reach the microphone they shared. They said they have thought about what their final text message to their moms would say if a shooter entered their middle school. There was the skinny 15-year-old sophomore named Noah Rosenfeld, wearing a black parka, who, with a booming voice, spoke directly to Congress, "Your thoughts and prayers will not stop the next mass shooting!" Energized students from middle school to law school huddled on Borough Hall's giant gray steps in Brooklyn and spilled out onto the courtyard below. Noses and fingers turned red from the frigid air. Still, students never dropped their signs that read: "Protect kids not guns," "#Enough," "Fear has no place in our schools" and "The NRA's money cannot buy my silence." Tireless as they cheered on speaker after speaker, they demanded that Congress enact gun reform and called for an end to gun violence in all its manifestations. And their unwavering energy and vigor sent a message of its own to the detractors, reluctant politicians and worried parents: We are ready for the fight.

This was March 14, one month after 17 people were gunned down in Parkland, Fla., and when nearly a million students across the country participated in walkouts to protest gun violence. The growing movement of young people signals a rupture in what had been Republican lawmakers' formula. A mass shooting takes place in a school, a movie theater, a concert, they offer "thoughts and prayers" with no action or law, and the whole cycle repeats.

Not this time. It is the failure of those in power to protect these children as well as feeling like their lives are in direct danger that is a huge motivating factor for this new gun reform movement. So, I spoke with activists who got their start in movements from anti-Vietnam, civil rights, labor, black radical freedom struggles, Occupy Wall Street, Black Lives Matter and the Women's March, to understand how these young student activists can sustain a long-term movement.

"We were the generation, especially among women, who coined the phrase, 'the personal is political,' but it sometimes feels these days that the political is purely personal," said Kim Fellner, a 1960s anti-war activist who went to work in the labor movement and found the National Organizers Alliance. She continued, "We need both the insight of our own stories and an understanding of systemic injustice and the arc of history. Passion is important, but so is knowledge. It's not an either/or, but a both/and — that's one of the most important lessons."

Like the black children in Birmingham, Ala., in 1963, who refused to be on the sidelines in the fight against segregation and left their schools to protest nonviolently (though they were met with water hoses and police dogs), these young activists today, raised in the 21st century, with the U.S. in seemingly never-ending war in the Middle East, in schools that look more like jails, yet still marred by mass shootings, and with social media, where videos of police brutality against unarmed black people and other forms of racist violence is offered on loop, also refuse to be sidelined.

Activists tell me that organizing around common issues is an important tactic for the building of a mass movement. In Angela Davis' book "Freedom Is a Constant Struggle: Ferguson, Palestine and the Foundations of a Movement," she writes, if that common connection is "not created, no matter how much you appeal to people, no matter how genuinely you invite them to join you, they will continue to see the activity as yours, not theirs."

Emma González, a Marjory Stoneman Douglas High School senior and largely the face of this movement, sat down with student activists from Chicago, and other Parkland students have met with survivors of the Pulse nightclub shooting in Orlando, Fla. That message and vision of inclusivity was echoed in Brooklyn, too, when speakers addressed the victims and survivors of the Parkland shooting, their impetus for gathering, but also acknowledged the communities victimized by gun violence in Baltimore, New York and Chicago. Though, when the people at the center of these same communities rose up to protest against police brutality, the national attention was significantly less positive. But the different ways the two protests have been received is not a dynamic these students activists are ignoring.

"We’re recognizing that many of us speaking out on this issue have a platform to do so because we go to schools that have funding for government classes, because we can afford poster board and markers and because we are of a racial and socioeconomic profile that the American media feels comfortable portraying," said Bryson Wiese, 17, the co-founder of the youth-led political organization Coalition Z.

If finding connection and solidarity with young people across the country is vital, so is placing the weight of the gun crisis onto those in power. "In labor organizing, we try to always transform the crisis that workers are experiencing, to a crisis for the bosses and politicians," said  veteran union organizer Rand Wilson. "They generally will not move until our crisis becomes a crisis for them. Then we begin negotiating from a position of strength. I think this applies to most other movements as well."

Fellner emphasized the value of seeking institutional changes. "Most of the fire and passion lives in the movements, but that tends to be short-lived and in the moment," she said. "To win gains over the long haul requires institutions, and that requires a long-term commitment and a different kind of effort."

At the Brooklyn rally, speakers made three policy demands: that the age to purchase firearms be raised to 21 (a law Florida adopted, which came from students lobbying lawmakers), that assault weapons be banned, and finally that background checks for any weapons purchase be mandatory and universal. Wiese said he is hoping "to translate the energy of the walkouts into both concrete policy demands and into infrastructure that can help sustain student investment in the gun reform movement over the long term."

While many of the students who participated in the walkout can't yet vote, there was a sense that gun reform would come by simply replacing individual politicians in elected office. The history of movements past indicates otherwise. "I think we learned in the sixties and seventies that mass movements can indeed bring about systematic change," Davis writes. "If one looks at all the legislation that was passed, the Civil Rights Act, for example, the Voting Rights Act, that did not happen as a result of a president taking extraordinary steps. It happened as a result of people marching and organizing."

As much as seeking policy change is important, these student activists can't forget the "nitty-gritty work of outreach, organizing one on one, and by sending travelers across the country," Ron Carver, an anti-Vietnam War activist, tells Salon.

Paul Mishler, associate professor of labor studies at Indiana University and an activist since the 1960s, warned of excluding young activists who are finding ways to engage, but haven't yet figured out the whole analysis. "As our analysis becomes more complex we can lecture and scold rather than win people," he said. "When we want to exclude people unless they are already convinced of the whole analysis — this is what I call the 'how can you be for peace if you eat meat' problem. When this happens activists can decide that the internal logic of the rhetoric is more important than the actual job of building a movement."

Bree Newsome, filmmaker and activist, and the woman who scaled a 30-foot flagpole in South Carolina in 2015 to take down a Confederate flag, said that these students activists must "prepare themselves for a marathon rather than a sprint," and to give credence to the trauma that comes along with doing this work. Bill Johnson, an original member of the Black Panther Party, said, "Each generation must define their fight for social justice." He added, "Mothers of children killed by police in NYC fought to get a special prosecutor to try cases of police killings. They won but it took 10 years. Nothing happens overnight. The fight for social justice is like getting on the subway, people get on and people get off, very few folks ride to the last stop."

It is abundantly clear that the fight for gun reform — both in demanding sensible gun laws and in seeking the cultural shift needed to address the epidemic of gun violence — is just in its beginning stages. But the students are hopeful. On the steps of Borough Hall, Rosenfeld looked out to the sea of his peers and promised that "we will be the generation to end gun violence." And as Davis writes, "It is in collectives that we find reservoirs of hope and optimism."