America: where people will go to any length for wealth 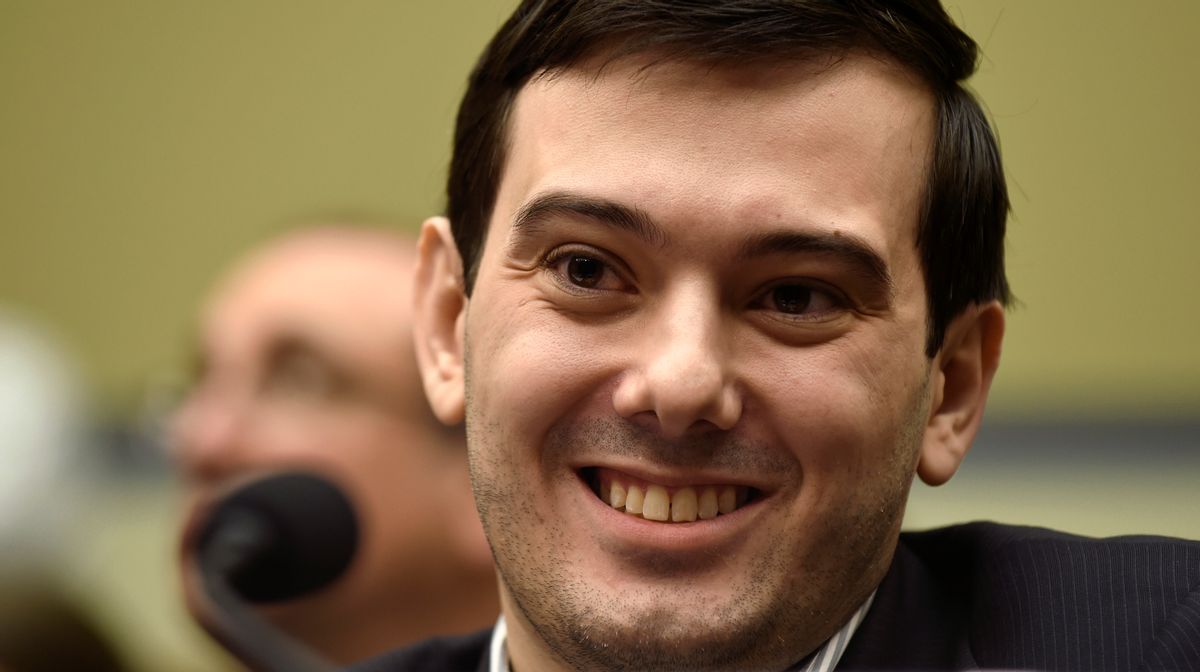 FILE - In this Feb. 4, 2016 file photo, Pharmaceutical chief Martin Shkreli smiles on Capitol Hill in Washington during the House Committee on Oversight and Reform Committee hearing on his former company's decision to raise the price of a lifesaving medicine. Twitter cited harassment when asked Jan. 9, 2017, why Shkreli's account had been suspended from the platform. (AP Photo/Susan Walsh, File) (AP)
--

On Friday, Martin Shkreli was sentenced to seven years in prison. What, if anything, does Shkreli’s downfall tell us about modern America?

But soon thereafter, Shkreli turned toward shady deals. He started his own hedge fund, betting that the stock prices of certain biotech companies would drop. Then he used financial chat rooms on the Internet to savage those companies, causing their prices to drop and his bets to pay off.

In 2015, Shkreli founded and became CEO Turing Pharmaceuticals. Under his direction Turing spent $55 million for the U.S. rights to sell a drug called Daraprim. Developed in 1953, Daraprim is the only approved treatment for toxoplasmosis, a rare parasitic disease that can cause birth defects in unborn babies, and lead to seizures, blindness, and death in cancer patients and people with AIDS. Daraprim is on the World Health Organization’s list of Essential Medicines.

Shkreli was roundly criticized, but he was defiant: “No one wants to say it, no one’s proud of it, but this is a capitalist society, a capitalist system and capitalist rules.” He said he wished he had raised the price even higher, and would buy another essential drug and raise its price, too.

In February 2016, Shkreli was called before a congressional committee to justify his price increase on Daraprim. He refused to answer any questions, pleading the Fifth Amendment. After the hearing Shkreli tweeted, “Hard to accept that these imbeciles represent the people in our government.”

Shkreli was subsequently arrested in connection with an unrelated scheme to defraud his former hedge fund investors. In anticipation of his criminal trial, Shkreli boasted to the New Yorker magazine, “I think they’ll return a not-guilty verdict in two hours. There are going to be jurors who will be fans of mine. I walk down the streets of New York and people shake my hand. They say, ‘I want to be just like you.’”

During his trial, Shkreli strolled into a room filled with reporters and made light of a particular witness, for which the trial judge rebuked him. On his Facebook page he mocked the prosecutors,and told news outlets they were a “junior varsity” team.

He retaliated against journalists who criticized him by purchasing internet domains associated with their names and ridiculing them on the sites. “I wouldn’t call these people ‘journalists,’” he wrote in an email to Business Insider. He said on Facebook that if he were acquitted he’d be able to have sex with a female journalist he often posted about online.

After his conviction, Shkreli called the case “a witch hunt of epic proportions, and maybe they found one or two broomsticks.” As she imposed sentence last Friday, the judge cited Shkrili’s “egregious multitude of lies,” noting also that he “repeatedly minimized” his conduct.

Shkreli’s story is tragic and pathetic, but I ask you: How different is Martin Shkreli from other figures who dominate American life today, even at the highest rungs?

Shkreli will do whatever it takes to win, regardless of the consequences for anyone else. He believes that the norms other people live by don’t apply to him. His attitude toward the law is that anything he wants to do is okay unless it is clearly illegal — and even if illegal, it’s okay if he can get away with it.

He’s contemptuous of anyone who gets in his way — whether judges, prosecutors, members of Congress, or journalists. He remains unapologetic for what he did. He is utterly shameless.

Sound familiar? The Shkreli personality disorder can be found on Wall Street, in the executive suites of some of America’s largest corporations, in Hollywood, in Silicon Valley, in some of our most prestigious universities, and in Washington. If you look hard enough, you might even find it in Trump’s White House.

Face it: America has a Shkreli problem.

Martin Shkleri will spend the next seven years of his life in prison. But what will happen to the other unbridled narcissists now in positions of power in America, who also blatantly defy the common good?