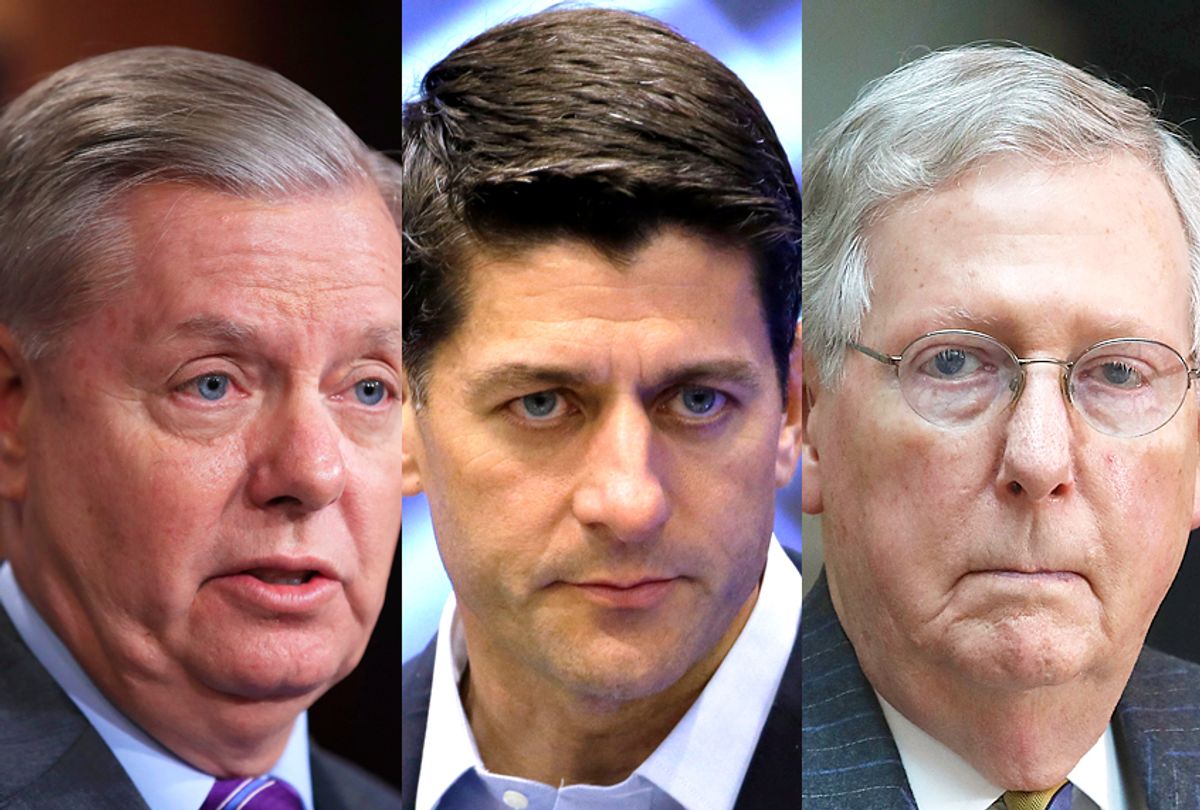 Sen. Lindsey Graham isn't exactly drawing a line in the sand when it comes to the fate of Robert Mueller, but the South Carolina Republican did issue one of the harshest warnings to President Donald Trump yet.

Conservative talk radio host Hugh Hewitt asked Graham about the possibility of Mueller being fired and whether or not it would be deemed an impeachable offense, during his broadcast on Tuesday.

"Probably so, if he did it without cause, yeah," Graham answered.

"Well, I think what the president will have done is stopped an investigation in whether or not his campaign colluded with the Russians, what effect the Russians had on the 2016 campaign," Graham said. "I can’t see it being anything other than a corrupt purpose."

He added, "I’ve seen no evidence of collusion, but to stop investigation without cause, I think, would be a constitutional crisis."

But Graham's responses both contained the potential key caveat, which would be if Trump fired Mueller "without cause."

In other words, Graham could be leaving space for Republicans, the Trump administration or the president himself to provide a specific "cause" for which Mueller could be fired. Graham's suggestion hinted that Republicans could avoid an impeachment if Trump fired Mueller for whatever they deemed a legitimate cause.

Allowing the GOP to determine if they buy Trump's argument should raise some red flags. Trump, and other Republicans, have railed against parts of the Russia probe to begin with. After all, Sean Hannity's argument — that the probe was tainted by the infamous Trump-Russia dossier drafted by former spy Christopher Steele — has gained traction in conservative circles.

But let Graham explain it himself:

The FBI’s handling of the dossier was really unprofessional, inappropriate. The [Hillary] Clinton email investigation was a joke. [Former FBI Deputy Director Andrew] McCabe probably deserves to be fired, but I can’t say until I look at all the evidence. Maybe so, maybe not. So the President’s right to be upset with the Department of Justice being overly political. He would be wrong, in my view, to try to stop this investigation without cause on the Mueller side. They’re disconnected in time. Mueller came along long after this. He’s looking at things unrelated to the dossier. And we’re a rule of law nation. And it goes for both parties.

House Republicans have already determined in their investigation that there was no collusion between the Trump campaign and the Russian government in the 2016 election. But many have cried foul, and Democrats have said that the investigation was partisan, and they intend to release their own findings separately.

However, any impeachment proceedings must be initiated by Paul Ryan, R-Wis. The speaker avoided the issue of justice for Mueller, saying instead that he has "received assurances" Mueller would not be fired.

"Special counsel should be free to follow through his investigation to its completion without interference, absolutely," Ryan said during a press conference on Tuesday, according to Politico. "I am confident he will be able to do that."

He added, "I have received assurances that his firing is not even under consideration."