A former staffer of Michelle Obama, Krish Vignarajah is the top of an all-women-of-color ticket for governor 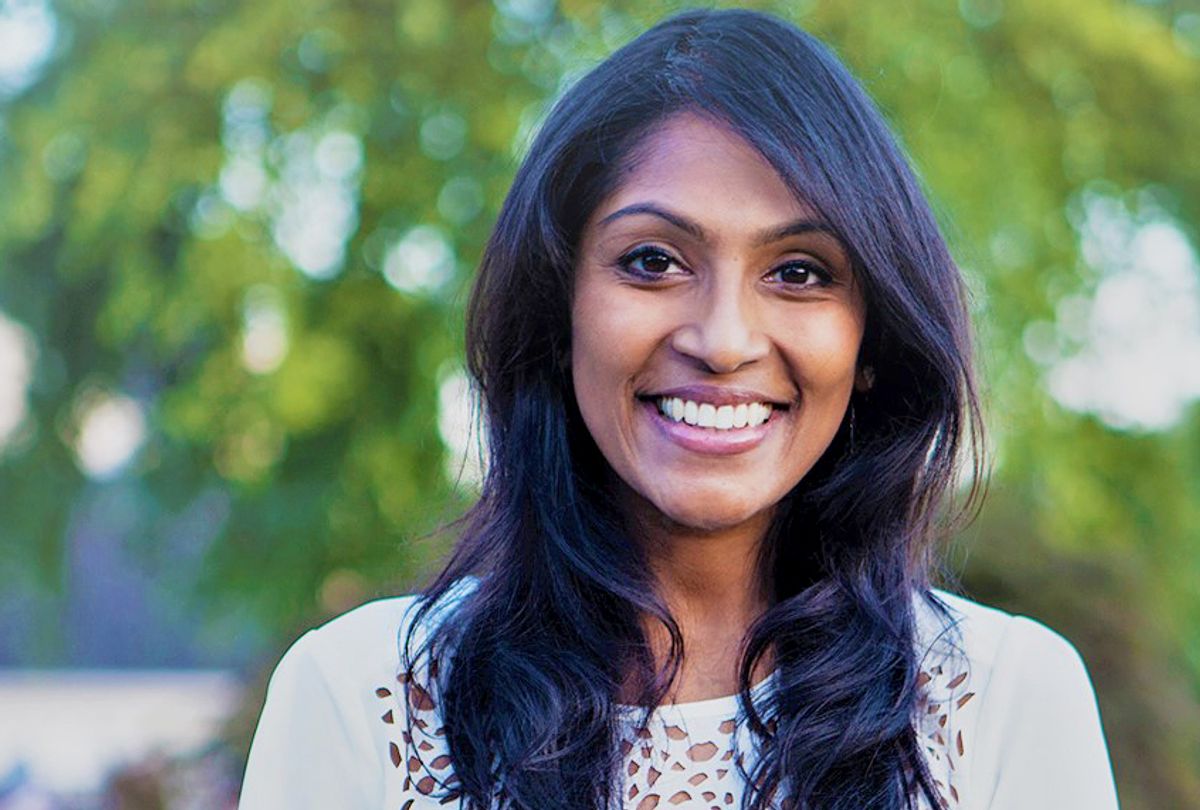 While headlines this week have put one woman running this year for her state's governor in the spotlight, women all across the nation are stepping up and throwing their hats into political ring for the critical 2018 elections. But Krish Vignarajah's campaign out of Maryland is unique. When the democratic contender named former Baltimore Teachers Union president Sharon Blake as her running mate last month, it became the state's first ever all-women of color ticket. “We have a strong, united vision," Vignarajah said at the time, "a vision for leadership, a vision for public education, and a vision for elevating women and women of color to have a stronger, louder voice at the table and in the political process here in Maryland.”

In a field dominated still by older white males, Vignarajah, who came to America as a baby when her family fled Sri Lanka, isn't trying to play by old boy's club rules. The former policy director for Michelle Obama appears in her campaign ad tapping on her laptop, meeting with supporters and breastfeeding her baby daughter Alana. “I wanted to be true to my experience and message and why I am running," she told The Cut this week, "and at the core of that is my daughter.”

Earlier this month, Salon spoke to Vignarajah — while she was en route to join in Baltimore student school walkouts — about the race in her state and the changing face of American politics.

I’m actually the only candidate in the field who is a product of Maryland public schools from kindergarten through to 12th grade. [Both her parents were Maryland public school teachers.]  I will tell you that for us it is very much about how we ensure our children have safe schools, because we’re so far from that right now. And what I think has been so heartening is the fact that you’re seeing our kids — knowing that this is the world they’re growing up in — taking the reins of power, more from a grassroots movement perspective. That’s why I hope that, by becoming governor, I can help them.

To your point about children stepping up in the way that I’ve never seen before, it is so heartening. I remember that Michelle Obama would say, “You know you have power literally in your own hands. Don’t just tweet about what you ate for lunch. Tweet about issues that you care about."

We see the power of social media in terms of the Parkland survivors. They’re speaking out and they're being heard. In terms of the broader movement, it is inspiring to see folks who have never been involved in politics getting off the sidelines. And that’s where I do think there is a groundswell of supporters who may never have been politically involved before realize what happens when folks get off the sidelines.

I’m curious about what it is that makes your ticket a model for what we’re going to be seeing going forward in the next couple of elections. It’s an all-female ticket, it’s an all-female-of-color ticket. You have a great investment, I’m sure, in what’s going on with immigration right now because of your own story of coming into this country when you were nine months old. It feels like I’m seeing so much change right now that gives me hope.

When I announced, one of the best pieces written was, "Donald Trump's worst nightmare is running for governor of Maryland."

I think we represent in many ways and the antithesis of Trump, but [we're] not just being part of the oppositional resistance. For me, what I stress is that I don’t want to be viewed as just anti Trump or anti our current governor. I think people want a positive, affirmative agenda. That’s why people mobilize because people know what change we can bring about.

Maryland is a two-to-one Democratic state and yet we have a Republican governor.  I think that on a range of issues, people realize what's at stake. So every time Trump and his cabinet of billionaires attack public education, our natural resources, every time they try to deprive women, minorities, immigrants of their basic rights, or every time they question the legitimacy of intelligence agencies or even the free press, I do think we are reminding ourselves and voters of the consequences of elections. And that's the stakes that compel me to run.

People like you, where you’re coming from politically, are connecting those dots between education and gun violence and domestic abuse and sexual harassment. They’re all part of the big picture.

I think that is in a sense that is a woman's perspective. It's the same way that it's not like we have a work/life balance where we're doing one thing and then we're doing the other. We just end up doing it all at the same time. And I think part of that means that we do appreciate that we can talk about education and gun violence. I'm thinking about comprehensive policy. Part of that is including an issue like free hot and healthy school breakfasts and lunches. You realize that obviously affects [students] ability.

It’s little things like that. Or initiatives to make sure that there are free menstrual products in the schools. A girl can’t necessarily pay attention and focus in her classroom if she doesn’t have adequate protection when she’s on her period. And these are things that when you have a bunch of middle-aged men in power, they don’t even think about it.

I think we need to be destigmatizing a lot of these issues.

One of the things I’ve been really interested about in the way that you have present it yourself politically is that you are very clear, very unafraid to identify as a feminist, to identify as someone who is supporting girls and women, who is making that upfront and center issue.

For me it’s a personal view that I do hold very near and dear that especially the Democratic Party has relied on women and minorities, especially in the last few elections. And so my point is we've got to not just rely on our base to win elections, but also give them a choice to truly represent themselves. Senator Mikulski of our state has a saying that if you want to save democracy, elect more Democrats. And my point is that if you want to elect more Democrats, have our representatives look more like our base. It is so heartwarming and inspiring to see the marches and the excitement around women taking their rightful place.

But while it’s great to be rah rah, I also think we need to acknowledge that in many ways we're further behind today than we were in the 1980s. So in Maryland it’s a great example of how staggeringly sad the statistics are. Out of federal and statewide offices, that’s eight congressman, two senators, lieutenant governor, governor, attorney general and comptroller, none of those positions are filled by women. And I’m running against [all] men.

Yes, we should be optimistic and positive, but you can’t take anything for granted, and that’s why I want us to own the set of issues that I’ve been talking about. By that I mean not just equal pay for equal work, but education and gun violence and the environment. All of these issues are all women’s issues. We are starting to not be shy about the fact that guys have run the ship for a very long time.

Women have so long had to self-deprecate in order to be accepted, in order not to be resented for our progress and our achievements.

I just want to make sure that we're not having the same conversations in ten or twenty years. We need to have a change in power . . . . We have to have more diverse representation, and I mean that across the board. I mean gender, ethnicity, socio-economic status, geographical location. And that’s where I think that we have fallen short for too many years.