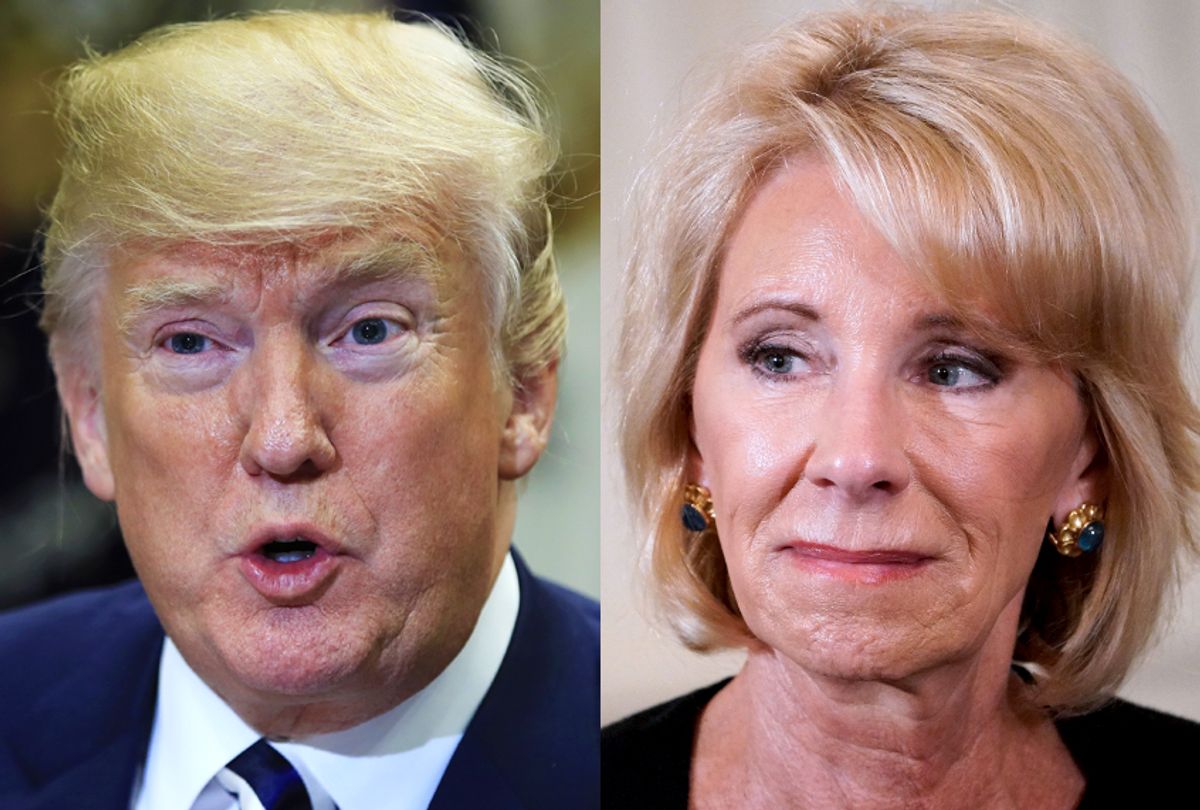 Now Donald Trump, in his quest to make America great again, is embracing policy ideas that seem designed to roll back those gains and increase the high school dropout rate again. Two of the biggest contributors to lower graduation rates are high teen birth rates and high rates of juvenile contact with the criminal justice system. Both teen births and juvenile crime problems have been trending downward for decades, but the Trump administration is pursuing policies likely to set both trends soaring high again.

The Trumpian interest in policies linked to higher teen birth rates — such as cutting off access to contraception and abortion, defunding teen pregnancy prevention programs and pushing "abstinence-only" programs that serve mainly to discourage birth control — has been well-documented. Now the administration is looking at another set of policy ideas that would lower high school graduation rates: Ending Obama-era guidelines meant to keep kids in school and out of the criminal justice system.

Worse yet, the administration is exploiting the deaths of 17 people in the Parkland, Florida, shooting as a cover story for this assault on graduation rates, especially among teenagers of color. In the quest to avoid gun control legislation, Sen. Marco Rubio, R-Fla., sent a letter earlier this month to the Departments of Education and Justice seeking to blame the Parkland shooting on a 2014 federal guidance meant to counter what experts call the "school-to-prison pipeline." Trump and Education Secretary Betsy DeVos, always eager to embrace a policy that reinforces racial disparities, responded by promising to rethink and likely remove these Obama-era guidelines.

The phrase "school-to-prison pipeline" may sound terrifying, but it accurately describes the problem the Obama administration sought to address.

“Following the Columbine shooting [in 1999], many schools responded by adopting these harsh zero-tolerance policies," explained India Thusi, a professor at California Western School of Law. "They were well-intended, but what they ended up creating was this harsh school environment where many students of color were being criminalized.

"The way that happens is through referrals to the criminal justice system for minor acts of disciplinary misconduct," Thusi continued. "The other way the school-to-prison pipeline funnels students is through the use of suspensions and expulsions in a discriminatory manner."

Jennifer Bellamy, a lawyer for the ACLU, explained further. "Many of the kids who are disproportionately impacted by the school-to-prison pipeline have learning disabilities and histories of poverty, abuse or neglect, and would benefit from additional educational and counseling services." Instead, she continued, "They are being isolated and pushed out by zero-tolerance policies that criminalize minor infractions of school rules."

In a letter sent by the Departments of Justice and Education to schools nationwide in 2014, officials noted that "African-American students without disabilities are more than three times as likely as their white peers without disabilities to be expelled or suspended," adding that "research suggests that the substantial racial disparities of the kind reflected in the CRDC data are not explained by more frequent or more serious misbehavior by students of color."

A lengthy document published around the same time detailed various ways that schools could reduce the use of suspension, expulsion and calls to law enforcement to deal with school disciplinary problems, including early interventions and efforts to create a more positive, friendly school environment that encourages sociable behavior.

Trump and Rubio's attempts to paint these Obama-era policies as somehow damaging to school safety have been widely embraced by the conservative media, which is always eager to talk about anything but guns and also eager to push authoritarian, prison-centered policies. But there's no reason to think that cracking down on kids for adolescent misbehavior will make schools safer. In fact, the opposite is likely true.

“If you adopt harsh disciplinary practices and turn schools into prisons and teachers into military personnel," Thusi said, "you only create an environment where students are less inclined to reach out to teachers and administrators when they need assistance or when they have valuable information to share."

Which is to say that overly harsh school discipline can actually make young people more likely to commit crimes, for reasons clearly laid out in the Obama administration guidance document: "Students who are suspended or expelled from school may be unsupervised during daytime hours and cannot benefit from great teaching, positive peer interactions, and adult mentorship offered in class and in school."

Nikolas Cruz, the Parkland shooter, had in fact been expelled from school. At the moment, while there's no way to know for sure whether that contributed to his decision to act out, or how much, it certainly undermines conservative claims that "zero tolerance" would have prevented this shooting.

This approach from the Trump administration, said Inimai Chettiar of the Brennan Center for Justice, resembles its approach to other crime problems. "For example, in response to the opioid crisis and the uptick in murder, they have reversed a lot of the Obama-era policies for reducing adult incarceration," Chettiar said, even though there's no real evidence that sending more people to prison is likely to help.

Ultimately, it's hard to avoid the conclusion that the Trumpian yearning for more prisons, expulsions and even executions has little or nothing to do with a return to "law and order." After all, Trump flouts the law on a regular basis and presides over what may be the most corrupt administration in American history. Prior to his presidential campaign, Trump had cultivated a number of ties to organized crime, and the head of Fusion GPS has testified to Congress about Trump's similar ties to Russian gangsters.

A likelier explanation is that Trump's attraction to harsh school discipline and mass incarceration is due to the well-documented fact that such policies are likely to increase racial disparities. That fits neatly with Trump's lengthy history of racism, including his tendency to equate criminality with being black or Latino. Now he's trying to exploit the murders of 17 people, most of them children, to push for more racist policies that will be worse than useless.