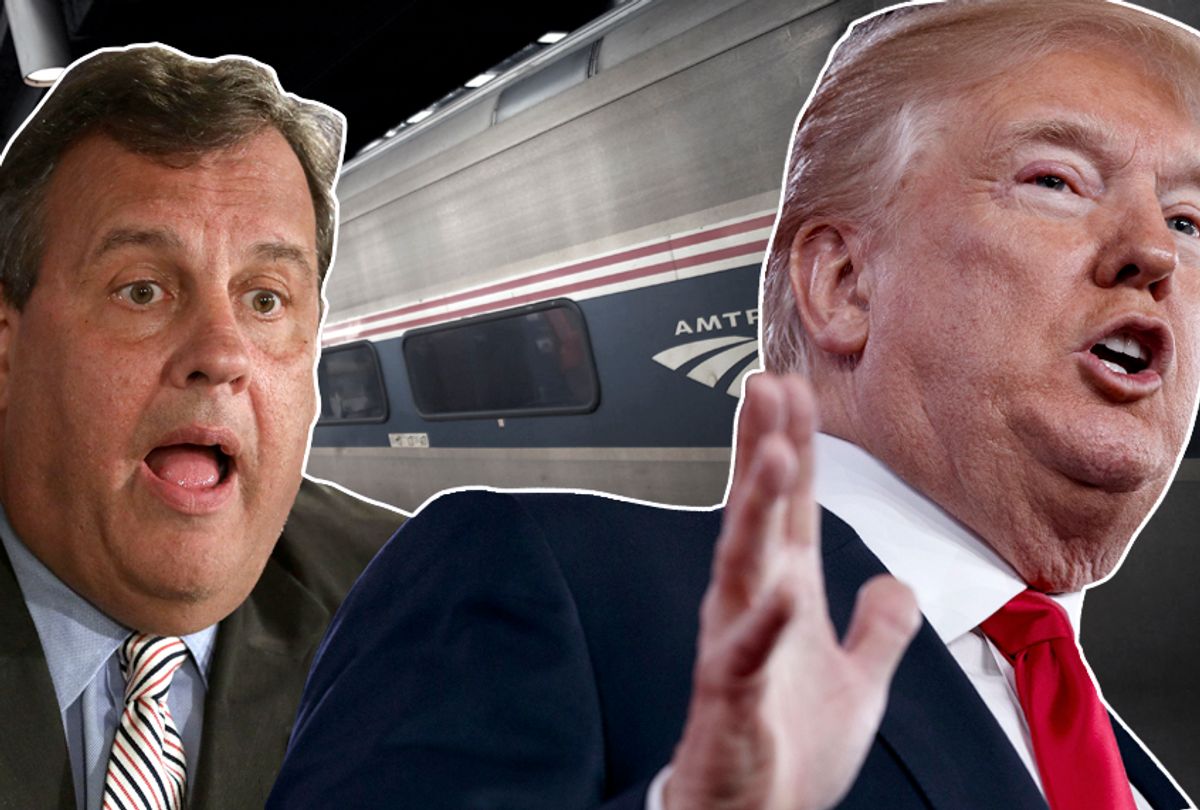 From day one of Donald Trump's presidency, his apologists insisted that Trump the builder would redeem Trump the racist xenophobe. Yet when presented with the need to push forward a long-overdue project to build additional rail capacity under the Hudson River between New York and New Jersey, Trump the builder is nowhere to be seen. Instead, he has instructed his minions to kill the Gateway project, reportedly to spite Senate Minority Leader Chuck Schumer.

Back in 2010 it was then-New Jersey Gov. Chris Christie who killed an earlier version known as the ARC (Access to the Region’s Core) tunnel project. That move was clearly aimed to get Christie national headlines as a fiscal conservative while he geared up for his own presidential bid, which ironically collapsed because he tried to use a bridge for something other than moving people.

Back when Christie walked away, half a billion dollars had already been spent designing a tunnel that had been on the drawing board for 20 years.

What is it with these larger-than-life bully boys who feel entitled to consign generations of commuters to Third World mass transit at First World prices, over an ego trip?

The issue is not whether the ARC or Gateway projects are perfect. They have faults. But the congestion and pollution of the Northeast Corridor can be seen from space, and dealing with it will require long-term planning and action. It needs to be on the same scale as the ambitious 19th-century projects that conjured up New York City's vast network of reservoirs and aqueducts.

That seems impossible when our leaders are so stuck on their own image in the media mirror that they become blind to everything else but themselves.

There still may be some light at the end of this tunnel. Politico has reported that last-minute congressional budget negotiations may result in a bipartisan deal to fund $540 million that would indirectly help Amtrak's Northeast Corridor plans, getting around Trump's instructions to Transportation Secretary Elaine Chao to pull the plug on the larger Gateway project.

For years, the lack of trans-Hudson passenger rail capacity has cost the entire New York-New Jersey region billions of dollars in lost productivity. For decades, well before Superstorm Sandy, engineers had predicted that the existing century-old rail tunnel needed a serious upgrade and that a second tunnel complex was essential.

As it turns out, in 2012, the existing tunnel – built in the early 1900s by the Pennsylvania Railroad – was seriously affected by the saltwater storm surge from Superstorm Sandy. While mainstream media made the twisted wreckage of a roller coaster on the Jersey shore the emblem for Sandy’s destruction, all the public still has little idea how much the storm undermined the essential infrastructure at the heart of the region’s critical core.

According to an independent engineering inspection done for Amtrak in 2014, the chloride and sulfate residue left behind by the storm surge “continue to compromise the integrity and strength of the track and rails.” Moreover, the inspection report concludes that “there is no reliable method of correcting this damage other than through the complete replacement of the track structure, including the ballast.”

There's more. The parts of the tunnel structure that were most seriously damaged were those passengers and crew would rely on to escape from the tunnel in the event of an emergency:

The most serious damage in the tunnels was found in the concrete bench walls. These bench walls, which run portal to portal, are an essential component of the tunnels. The structures provide emergency egress from trains, when necessary, as well as access to trains and track for emergency and other personnel … These bench walls were found to have a significant number of longitudinal cracks, severe spalls with exposed steel, and corrosion of embedded steel elements.

Due to the porous nature of concrete, the continuous duct work, the cracks and various other factors, there were a multitude of paths into the structure of the bench walls for chlorides and sulfates. … Due to their thorough infiltration of the bench-wall surfaces and the ducts, these substances cannot be reliably removed.

In essence, the tunnel is actively deteriorating from the inside. In August of 2014, the Amtrak report continued, a piece of bench wall fell onto the tracks, causing an extensive train delay: “Unless the damaged bench walls are replaced, such incidences will continue and worsen due to the processes known generally as chloride attack and sulfate attack.”

Imagine a spring morning in the mid-2020s: A catastrophic failure in one of the two century-old trans-Hudson rail tunnels traps a packed New Jersey Transit train under the river, leading to the deaths of scores or hundreds. We have to brace for these scenarios because despite the president's big talk about "infrastructure," our government appears incapable of funding or building a new tunnel complex. The tens of thousands of commuters who rely on the existing tunnels every day need to adopt the stoicism of my Welsh coal mining ancestors, every time they went down the shafts "maintained" by the mine owners.

It was a year ago on Good Friday, after New Jersey Transit service collapsed during rush hour, that an Amtrak police officer fired a Taser bolt that set off a stampede at New York's Penn Station. A mob of stranded commuters raced for the exits, leaving 16 people injured, some with broken bones.

Last month, four New Jersey House Republicans wrote to Speaker Paul Ryan, imploring him to ignore Trump's diktat and include money for the Gateway Tunnel project in the federal budget:

The letter was signed by Reps. Leonard Lance, Frank LoBiondo, Chris Smith  and Tom MacArthur, joined by five more House Republicans from New York and one from Pennsylvania. (It is worth noting that LoBiondo has since decided to retire, while Lance and MacArthur are high on the list of GOP incumbents likely to be swept away in the 2018 midterms.)

According to the latest polling from NBC News and the Wall Street Journal,, Trump’s approval ratings are on the rise, even as prospects for Republicans in Congress have taken a turn for the worse.

While the president's numbers are still several points south of 50 percent, he seems to have stopped his downward slide, at least for now. I attribute that to his ability to skillfully play the news media, keeping them so fixated on his personality and his "outrageous" behavior that they miss the ruinous impacts of his policies, such as killing the Gateway tunnel.

Throw in the media's knee-jerk impulse to credit Trump for a strong economy, without doing any actual reporting to substantiate that assertion, and you can see Trump poised to stage another victory in 2020. Think that could never happen? It wasn’t supposed to happen in 2016 either.

For all the vast resources of the New York Times, Wall Street Journal and MSNBC, they can’t seem to grasp that Trump has got them wasting their time and undermining their own credibility through endless speculation over who's in and who's out at the White House.

On her show last Friday night, MSNBC’s Rachel Maddow proclaimed that she had “no appetite at all for Kreminology-style type coverage and speculation about who's in favor and  who's out of favor — who's been able to move their desk a little closer to the Oval Office and who someday might be fired.” Then she hosted a segment doing exactly that.

Every time the White House throws out anonymous leaks about the potential firing of national security adviser H.R. McMaster, the mainstream media slaps it on page one or hypes it as breaking news. In the next cycle, reporters breathlessly seek on-the-record confirmation from the Trump White House, and then act outraged when they get gaslighted by Sarah Huckabee Sanders, who of course denies the whole thing. It all goes down as another episode of "fake news," reinforcing the widespread bias held by tens of millions of Americans that the media just makes things up.

Meanwhile, a tunnel project that could improve millions of people's lives -- and potentially avert a catastrophic loss of life -- is quietly killed. No one reports on it, and almost no one notices. The era of misrule continues.