Why is Trump fixated on women who remind him of his daughter?

The real object of Trump's obsession is clear, when you take a step back 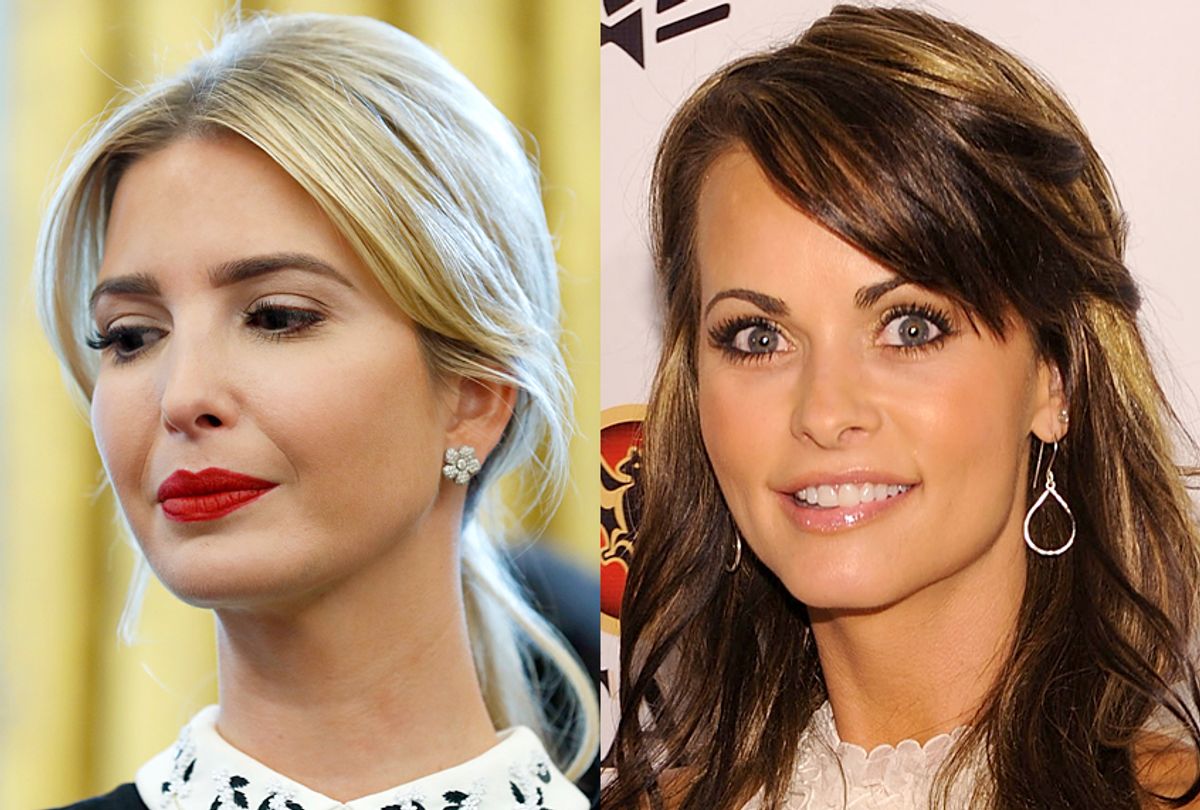 In the never-ending excuses for brain bleach this administration provides, the creepiness of Donald Trump's fixation on his daughter Ivanka always ranks way up there. The most recent bit of information we can never unknow? That he reportedly told his alleged former mistress that she was "beautiful like her" — her being Ivanka.

During a CNN interview Thursday, Karen McDougal said, "There wasn't a lot of comparing, but there was some. I heard a lot about her." McDougal says she received this praise while she was having an affair with Trump, a sexual relationship he also initially tried to pay her for. And nothing says, "Wow, that is a lot to unpack," like a man who reportedly treats a woman who resembles his daughter like a prostitute.

Trump's boundary-obliterating fascination with Ivanka has been well documented. Speaking on "The View" in 2006, he famously declared that were she not his child, "perhaps I'd be dating her." In 2015,  he echoed the sentiment to Rolling Stone, saying, "Yeah, she's really something, and what a beauty, that one. If I weren't happily married and, ya know, her father. ..." He's called her "hot," "voluptuous" and "a great beauty," and claimed she has "the best body." A 2016 AP report revealed that former staffers on "The Apprentice" claimed that "He repeatedly made lewd comments about a camerawoman he said had a nice rear, comparing her beauty to that of his daughter, Ivanka." And also in 2016, BuzzFeed reported that a draft version of a Washington Post story contained the later deleted line, "'Can I ask you something?' Trump asked someone I know, about his then-13-year-old kid, 'Is it wrong to be more sexually attracted to your own daughter than your wife?'"

Most recently, another former alleged mistress, Stormy Daniels, claimed in January that during their 2006 relationship, "He told me once that I was someone to be reckoned with, beautiful and smart just like his daughter."

And lest you fear poor young Tiffany has been entirely left out of her father's uncomfortable compliments, let's not forget that time he enthused about his then 1-year-old daughter by saying, "Well, I think that she's got a lot of Marla. She's a really beautiful baby, and she's got Marla's legs. We don't know whether she's got this part yet, but time will tell.” And at that, he made a cupping gesture toward his chest.

Trump's profoundly revolting commentary about his daughters and his alleged willingness to compare women who claim they've slept with him to his offspring is full-body shudder-inducing material. But when I consider his icky litany, I'm reminded of something Aerosmith's Steven Tyler once said regarding his famous, beautiful daughter Liv. When asked if he'd ever found himself attracted to her, he laughingly admitted, "Oh, absolutely,” adding, “How can a father not be attracted to his daughter, especially when she’s a cross between the girl he married and himself? Unless he’s an ugly man, a father is always gonna be sexually attracted to his daughter on a certain level.” Astutely, Tyler went on to observe, "There’s a certain level of narcissism in incest. All a man has to do is be totally honest with himself and he can see it. However, the real man knows that’s just a place to never go."

Here's a word that leaps out in that statement: narcissism. There's nothing to suggest Trump has ever acted inappropriately toward his daughters. There is, however, ample evidence he's madly infatuated with himself. It's not hard to imagine him, in his majestically un-self-aware way, being drawn to women who remind him of ... Donald Trump. This is a man who just this week was bragging of his physical prowess in an imaginary brawl with a former vice president. A man who believes, "All of the women on 'The Apprentice' flirted with me — consciously or unconsciously. That's to be expected." (Sure, Jan.) For such a man, how could the beauty of his child not be his own? How could her sexual allure not be his own achievement?

Make no mistake — Trump's track record of behavior and commentary is still wildly inappropriate and still super-, super-gross. It's just that, when viewed in this interpretive light, it's not about Ivanka at all, really. It's about his bottomless obsession with the one true love of his life. Himself.