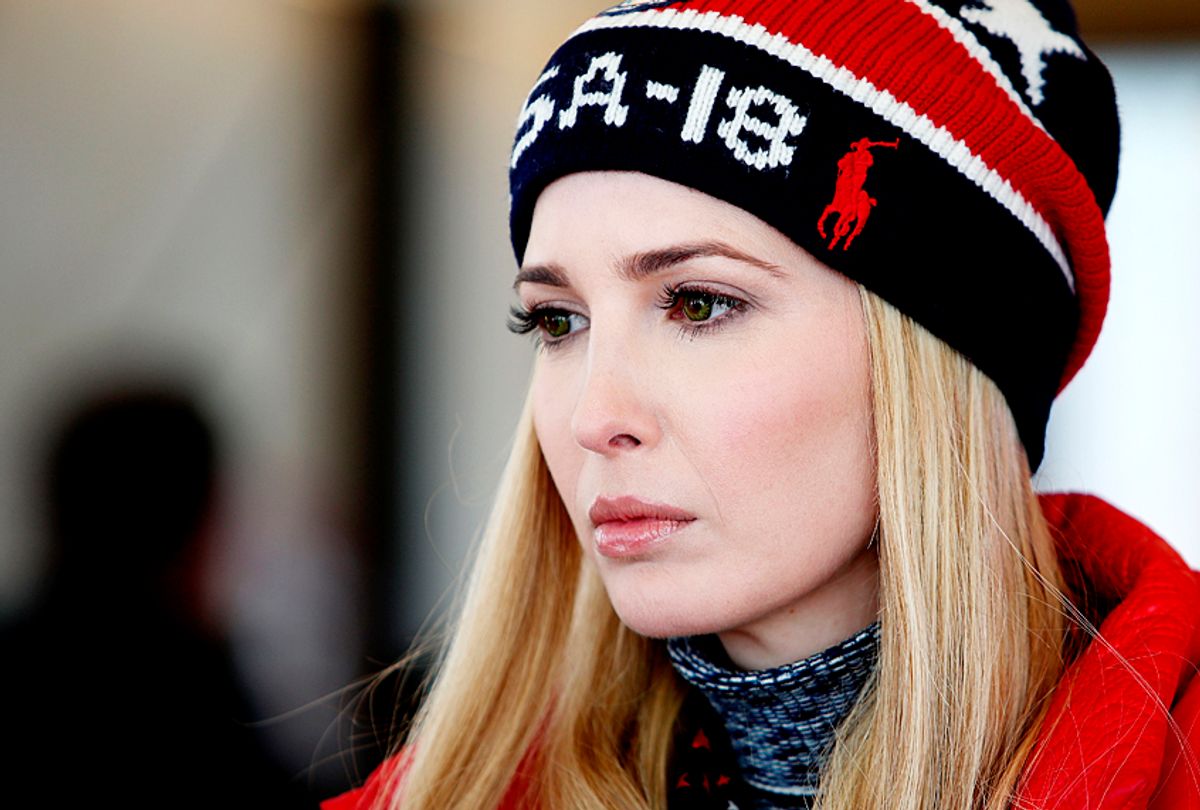 The daddy's girl makes for a perennially easy target. She's the fish in a barrel subject of reality shows about super sweet sixteens and bridezillas; she's the worst character in any broadly written comedy. And you know why? Because she's the actual worst. Yes, this is about Ivanka.

In the Trump all-star band from hell, Ivanka has often been cast as "the nice one." She doesn't have the penchant for rage-tweeting that her father and brothers possess, and her talent for occasionally keeping her mouth shut means she doesn't seem as brazenly ignorant as often, either. There she is, with her lifelike smile and her "business lady" persona — her working mommy shtick and her "what to wear to your spring internship" clothing advice. (Pink. Seriously) Yet as we all know, Ivanka is no mere TJ Maxx clearance rack faux-lebrity. She has a White House role as an advisor to her father, the president — even if she doesn't have the firmest grip on how the protocols of email work. Just this past week, she acted as an envoy at the Winter Olympics — prompting skier Gus Kenworthy to ask, "Honestly, tf is she doing here??" And on Monday, a month after unironically tweeting "Let’s all come together, women & men, & say #TIMESUP!" she faced questions about the sexual harassment claims against her own dad on "Today."

Most people, if asked, "Do you believe your father's accusers?" would likely not leap to answer in the affirmative. No one could reasonably expect Ivanka Trump, whose father once mused that if they weren't related "perhaps I'd be dating her," to nod and say, "He's always seemed like a dirtbag to me, Peter!" But someone who lives in the public eye and surely knew such a question was going to be asked could have consulted with media strategists to cough out a response that was both clear in its support and in alignment with the cause of workplace equality. Yet as Deep Throat said in "All the President's Men," these are not very bright guys.

So instead of leveraging her TV moment to look like a non-monster, the young Trump said, "I think it's a pretty inappropriate question to ask a daughter if she believes the accusers of her father when he's affirmatively stated there's no truth to it. I don't think that's a question you would ask many other daughters. I believe my father; I know my father. I think I have that right, as a daughter, to believe my father."

Did she mention that she's a daughter? Who is invested right now is her perceived rights? Because she sure as hell didn't mention she's ostensibly a public servant, representing the United States on the global stage. Yet literally moments before, she was comporting herself as a White House official, credibly stringing together the phrase, "Consistently we've said there was no collusion and we believe Mueller will do his work and reach that same conclusion." But also, she's a daughter. Shoutout to every person who's ever had to deal with a client who just cannot resist, when something doesn't go exactly to her liking, deploying the phrase, "Do you know who my father is?"

And it's that nauseating stench of entitlement that Ivanka, for all her glossy hair and patriotic knitwear, cannot escape. She's that girl, the one who pretends she didn't get in on a legacy admission, whose noblesse oblige always extends exactly as far as her own convenience, whose notion of charity is a photo op. She's the colleague who thinks that because she's richer than anybody else in the department, she's also smarter, the one whose pleasantries at a school function transparently communicate that she thinks she's being gracious to her inferiors. But tell her that you're out of gluten-free bread, or that her kid got a C in math, or that you're curious if her self-confessed pussy-grabbing father is a harasser, and she will drop her mask faster than a Scooby Doo villain. She's the girl who thinks she's the princess of Genovia when everyone else sees plainly she's Veruca Salt. And if anyone thinks for a moment she's different from her daddy, just look how strenuously she will always work to remind you that she's his girl.