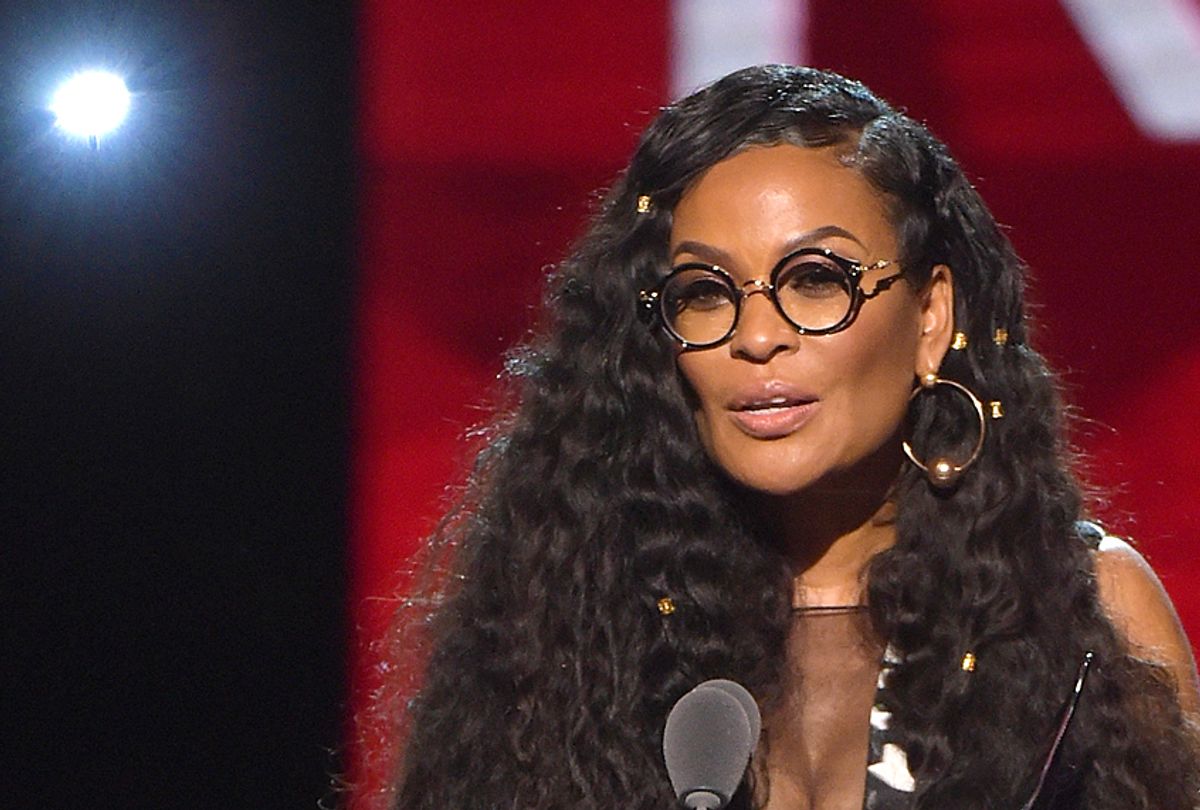 The cover of "Black Girls Rock! Owning Our Magic, Rocking Our Truth," edited by Beverly Bond, features a glossy white jacket with a black woman and her afro dominating the page. If the white portion of the cover feels polished to the touch, then the woman and her afro are textured; a certain depth can be felt when you run your fingers along the tendrils of her hair.

Once you open the book, each flip of a page offers a different black woman trailblazer photographed in all her glory. In the pages that follow, in some form, these women tell their stories. Words from Rep. Maxine Waters (D-Calif.), Rihanna, Ibtihaj Muhammad, the first Muslim-American to win an Olympic medal, Angela Davis, Joy-Ann Reid, Missy Elliott, Lupita Nyong'o, Black Lives Matter co-founder Patrisse Cullors, and many more fill up the book's pages. Bond's own journey serves as the intro, where she writes, "My mother was intentional about affirming me. She knew from experience that the world was not fair or kind to women, and was even less kind to black women and girls."

"Black Girls Rock! Owning Our Magic, Rocking Our Truth" is an offspring of Bond's annual awards show, Black Girls Rock! — a tradition she began in 2006 to honor the accomplishments of black women in a broad array of industries. From the beginning, Bond also developed various nonprofit mentorship programs, like an international leadership conference for women of color and an after-school program that focuses on science, technology, engineering and math. In 2010, the awards show started airing on BET, and now millions of viewers tune in each year.

Bond, who is a DJ and former model, was constantly aware of all the messages diminishing the humanity of black girls and women. She remembers watching an episode of "Entourage," where four black women in the credits were listed as "video hoes," while a white woman, who instantaneously slept with the main character, was listed as "woman." She knew the way black girls are criminalized in schools, by being suspended, expelled and punished at alarmingly higher rates than their white peers. And she was coming from the modeling industry where black models were scarce and always measured against European standards of beauty. Bond was waiting for something to be done about the gross inequities she witnessed and experienced, until she realized it had to be her. What started out as an idea for a T-shirt, Bond knew pretty quickly needed to become something much bigger. "I certainly wasn’t the first person to bring this conversation to the forefront," she said, "but I think I was able to do it in a way that penetrated in entertainment in the way that nothing else could."

The coffee-table book is a companion to the undertaking of Black Girls Rock, Bond says, an additional platform to push forward her work of lifting up black women's stories. "I’ve been brainstorming about black women's stories for all this time," Bond said. "My mission is to elevate our narratives and then to also expose us, and to expose the world to our input ... You read these stories and you’re inspired by their struggle, by their triumph, by their grit, by their discipline, by their work ethic, by their spirituality, by their magic."

There are well-known stories, like the victories of Venus and Serena Williams, or the unique perspective and intellect of Michelle Obama. Within the pages, too, are the black women at the forefront of less glamorous, but equally influential sectors. There's Lisa Jackson, the former head of the Environmental Protection Agency, who served during Barack Obama's tenure, and was the first black person to lead it. In it she writes about her appointment, "I felt that I had to act on behalf of the countless people of color and communities that are marginalized, voiceless, and powerless to the face of environmental injustice and abuse. To be the first black head of the EPA meant personifying the idea that environmental protection should apply to all."

Bond imagined she would feature about 20 women in the book, accounting for a fair number of declines and schedule complications, especially given the celebrity of many of the women who were on her dream list. But nearly 60 women agreed and are presented in some form, as they describe their journey, reckoning with the unparalleled racism and sexism black women are forced to endure and also, the "black girl magic" they tapped into to reach their level of success. Bond interviewed the overwhelming majority of the women, and worked for two years to piece together their stories into first-person narratives that span the autobiographical, calls to action, deeply vulnerable disclosures, and themes of resilience. Bond suggests that the support and participation of all these women, many of whom are famous, is "about their understanding that we as black women and girls need this," she said.

The power of Black Girls Rock! and the oft-accompanying phrase "black girl magic" has moved from the award show to hashtags on social media, to a mantra for many. "'Black Girls Rock!' is our generation’s equivalent of 'Black is beautiful,' which came out of a need to promote blackness that was not manipulated by European standards," cultural critic Michaela Angela Davis, who is featured in the book, told the Baltimore Sun. "Black Girls Rock was what we needed to hear."

But in 2013, a "#whitegirlsrock" hashtag emerged on social media, where some white girls and women expressed outrage at an award show that did not center or celebrate them. And when former first lady Michelle Obama spoke at the Black Girls Rock! awards in 2015, she faced similar backlash. One news site published an article with the title "Michelle Obama Sends Message to White Girls That They Don’t Matter." It is a familiar response from pockets of white America whenever black people advocate for their humanity (think #AllLivesMatter).

Bond is keenly aware of this dynamic, which is why she is cautious about blindly lauding progress, even though she acknowledges the major strides that have been made since Black Girls Rock!'s inception— especially in Hollywood — as far as representation and diverse storytelling. "I’ve seen this elevation of black women," Bond said, adding that she believes Black Girls Rock! has been part of the paradigm shift. "But we’ve been missing in action for a long time. If we think about this time, this is really new to see black women in all these spaces."

Still, Bond is in it for the long haul, committed to celebrating and nurturing black girl magic in all its manifestations. "We need to see ourselves and we need to put this piece of history in the world, so that black girls — every generation can come back to this and reference this," she said of the book. For Bond, "Black Girls Rock! Owning Our Magic, Rocking Our Truth" says definitively in physical form, "We are here."