Josh Radnor's teacher is a portrait of a good guy with a stunning lack of awareness. Don't emulate him 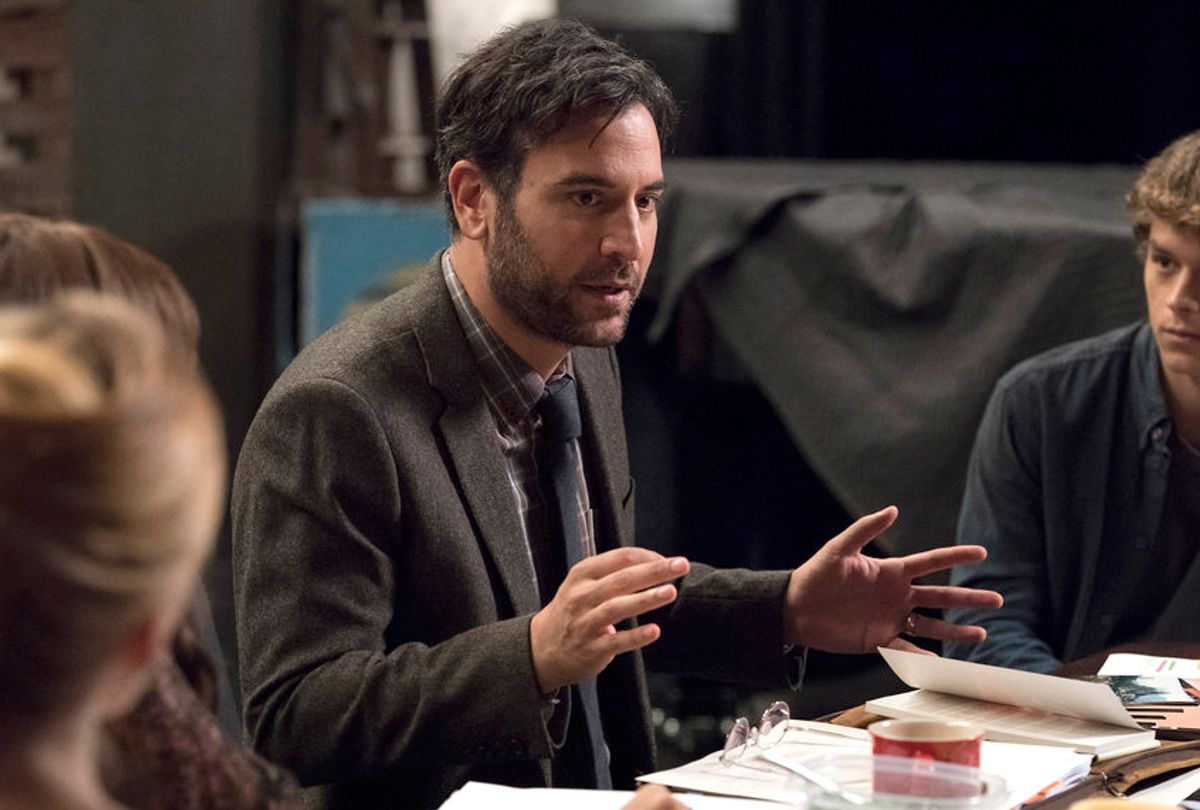 Guys, we need to talk.

See, there’s been a lot of conversation going around lately concerning how to be an effective ally. It began as a way to help white people figure out their feelings in the wake of the Ferguson uprising and the rise of Black Lives Matter. Lots of folks wrote up handy guides on what to do and what not to do that were very helpful. If you bothered to read them.

Something similar is coinciding with #MeToo and #TimesUp, both of which are currently confusing sizable slices of an entire gender freshly awakened to the idea that it’s not enough to brag about never having assaulted or harassed a woman — call it #NotMeThoughRight?

Once again, many ladies and a few gents helpfully penned more “How to Be or How Not to Be, That Is Your Question” guides that, again, are very instructive. Did you read any of those? Probably not.

Luckily for you, there is now a walking, talking, breathing example of How Not to Be on broadcast television.  He goes by the name of Lou Mazzuchelli (Josh Radnor), the main protagonist of “Rise.” Watch him. Watch what he does and how he acts every episode; there’s a new one airing Tuesday at 9 p.m. on NBC. Take notes of what he does in difficult situations. Post them on the wall. Refer to those notes and do precisely the opposite of what Lou does.

Now, if you've seen "Rise," you may be wondering what Lou's crimes are. It's a fair question. Lou does not grab ass or outwardly disrespect anybody around him. He's a loving and, as far as we know, faithful spouse to his wife, Gail (Marley Shelton), although he overcommits and drops the ball, sometimes due to his keen devotion to doing good.

By all appearances, Lou is no more of a terrible person than, say, Radnor’s most famous character Ted Mosby, the long-winded protagonist of “How I Met Your Mother.” But let’s not forget that Ted, though lovable in his way, is a special kind of awful. At times his smugness can be so unbearable that the laugh track can’t drown it out. But Ted’s impact as an irritant is diluted by the presence of his group of wacky friends, mostly Neil Patrick Harris’ Barney Stinson, not to mention a swarm of barflies in Manhattan, where the show’s adventures are set. Besides, for the most part, Ted keeps his annoying qualities within his tight-knit circle of friends.

Lou, on the other hand, is a wee carp flopping all over a small Pennsylvania town. To construct Lou, “Rise” co-creator Jason Katims drew inspiration from Michael Sokolove’s book "Drama High” and its central protagonist, drama teacher Lou Volpe. But Katims, the thoughtful creative force behind “Friday Night Lights” and “Parenthood,” subsequently explained that the character is very much his own creation and not a direct lift of that book's hero, for which the real-life Volpe should be grateful. Surely he’s not insufferable. Not like Lou Mazzuchelli.

As a devoted teacher at Stanton High, Lou Mazzuchelli strives to inspire his students while contending with difficulties at home, primarily a rebellious son with substance abuse issues (Casey W. Johnson). Nevertheless, Lou cares like few others do and is genuinely devoted to making a difference in the world. In the series’ second episode, “Most of All to Dream,” he makes a poignant speech to the school board about wanting to make a difference and enrich this community.

“But I’m up nights thinking that I’m not doing enough,” he tells the crowd, his voice fiery with the feels. “That’s why I took over Stanton drama.”

How giving of him!

What Lou leaves out is the part where he bulldozed over his colleague Tracey Wolfe (Rosie Perez), the woman who has been producing and directing the school’s plays for many years on a shoestring budget, receiving zero appreciation for her considerable efforts. By the way, in that meeting, does Lou ask the board for funds for the drama department? Of course not. That would be uncomfortable! He leaves that job to Tracey.

Pertinent to this discussion is that Tracey is a woman of color. Consider the optics of that.

Don’t understand why that’s a problem? Go ahead and present this scenario to any woman of color that you know. I guarantee that she has been a Tracey at some point. Heck, present it to any female who has negotiated an American workplace. Nearly every woman has a story to tell about spending years slogging it out faithfully at a job only to see a mediocre white man get promoted above her. Are you that man? Look at "Rise," then. Lou is you.

Lou has zero experience with helming a department and happily takes half of what Tracey scratched to get in order to run the place. He promptly ditches the work she’s put in on a production of “Grease” and informs the kids that, instead, they’re doing “Spring Awakening,” a brilliant and complex play that includes a variety of touchy subjects many parents would rather not broach with their children, such as sexual awakenings, suicide, abortion and physical abuse.

Which is fine, Lou thinks, because ... Broadway! Tony! Alas, as it turns out, it’s not fine. It’s so not fine, in fact, that the drama department budget gets cut to zilch in retaliation for the teen cast’s stubborn allegiance to Lou. Well, that, and the fact that they fueled a bonfire with a bunch of dusty old pirate costumes.

Here are the ways to not be a Lou Mazzuchelli: Don’t be a righteous, do-gooder alpha male masquerading as a beta so you can weasel your way into debates, groups and topics that are beyond your understanding. Volunteer, help, but don't leap to lead something you don't fully comprehend. Don’t shove your will down other people’s throats like a bushel of Brussels sprouts just because you’ve read a little Noam Chomsky, made a couple of cultural pilgrimages to Broadway in New York, and are the proud owner of your own living room tower composed of unread issues of the Nation and the New Yorker.

Also, when you do overstep, as all humans do, apologize. Lou Mazzuchelli does not apologize because he has nothing to apologize for — he’s fighting the good fight! He’s just asking for what he wants from the world, and getting it, even if he has no idea what to do with it. He’s just trying to spruce up the place!

And it isn’t only women of color who suffer the doltish enthusiasms of the universe’s Lou Mazzuchellis, by the way. In a future episode he storms into another man’s classroom, disrupts what he’s doing and takes over for a moment to demonstrate that the kids are capable of better and greater things-a! After he leaves, confident and content that he’s touched a few lives, we learn he’s reduced one child to tears.

But that’s OK! We’re all pulling for Lou.

Except, not really. See, in the way of all Lou Mazzuchellis, it’s everyone else’s hard work that makes him look good. The young cast of “Rise” is extraordinary, particularly “Moana” star Auli’i Cravalho’ s Lilette, a working-class girl who catches the eye of football star Robbie Thorne, played by the equally compelling Damon J. Gillespie.  Perez is wonderful. Honestly, so is Radnor. If he weren’t doing his job well, we’d have no reason to harbor such passionate distaste for the character he plays. He's that good!

No, Lou Mazzuchelli irks because of the way he is written, and because he is the show's focal point, much in the way his kind is treated in the real world. He is legion. He may even be ... you.

Unfortunately, he may indeed be impossible to get rid of.  After the drama kids mount their fiery rebellion, Stanton High’s thoroughly ticked-off principal dresses down Lou but, as expected, allows “Spring Awakening” to move forward.

“Instead of being the bad guy and having this blow up further,” he angrily bellows, “I’m just going to let you fail on your own!”

Presumably upward, if history is any indicator. Because that’s what Lou Mazzuchellis do.