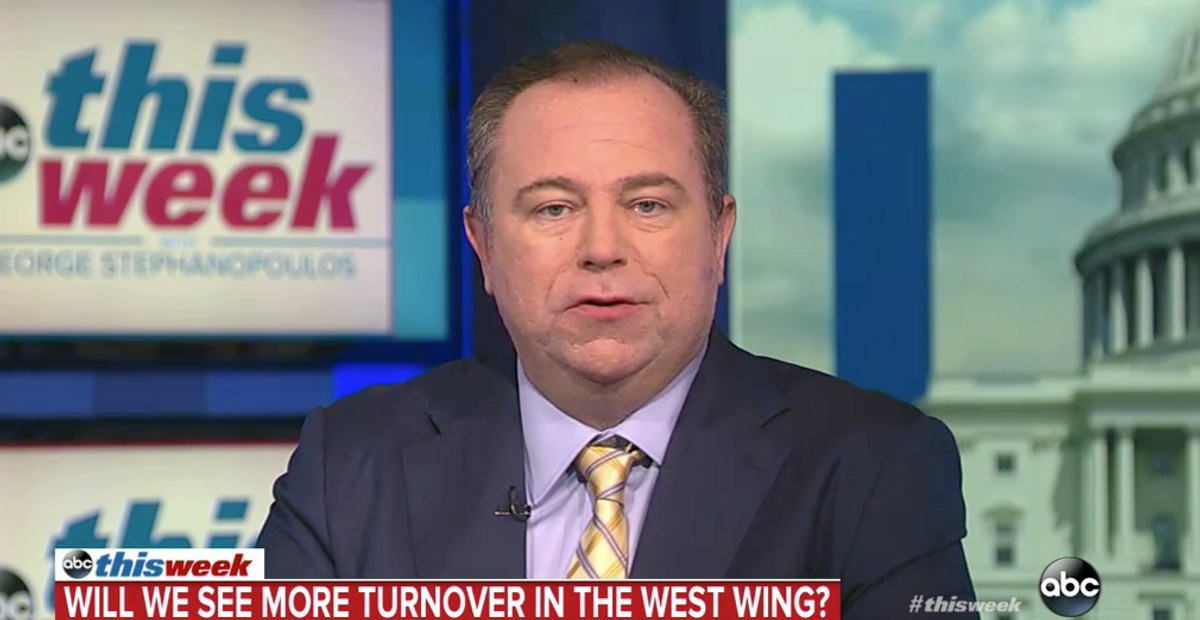 Christopher Ruddy, CEO of Newsmax and a close friend of President Donald Trump, warned of "one or two major changes" that would coming to the Trump administration "very soon."

Amidst widespread reports of turmoil in the White House, Ruddy said the president told him that he was "perplexed" by the news, and had instead insisted that things were running like a "smooth machine."

"The president told me he’s perplexed by all of these reports, there’s chaos at the White House, or mass staff changes," Ruddy explained on ABC's "This Week" on Sunday morning. "He told me that he thinks the White House is operating like a smooth machine, in his words."

Ruddy added, "He did say that he’s expecting to make one or two major changes to his -- to his government very soon, and that’s going to be it."

When it comes to who will be involved in these changes, the details are quite scarce. But Ruddy said Veterans Affairs Secretary David Shulkin "is likely to depart the cabinet very soon," though, he cited sources other than Trump. Others, such as Housing and Urban Development Secretary Ben Carson, White House chief of staff John Kelly are safe in their roles. Shulkin has come under fire in recent weeks following reports of taxpayer abuse.

He continued, "I think the president’s made incredible choices with Larry Kudlow, John Bolton, I know he was very ecstatic. Very experienced guys in their areas of governance, they’re going to do a tremendous job for the president and the country."

The news comes as Trump has made some substantial changes to his administration. In recent days and weeks Secretary of State Rex Tillerson was fired, while National Security Adviser Gen. H.R. McMaster was replaced. Trump's chief economic adviser, Gary Cohn also departed the administration after Trump announced he would implement new tariffs on steel and aluminum imports.

The turnover rate for the Trump administration is unprecedented when compared to previous administration's a new Brooks Institution report showed.

The president also recently announced that two new attorneys were set to be added to his legal team, for the ongoing Russia investigation by special counsel Robert Mueller. But his personal lawyer announced on Sunday that would no longer happen.

Trump tweeted on Sunday morning that "many lawyers and top law firms" have wanted to represent him, but that he was "very happy" with his current legal team.

In the Trump White House, there's certainly no shortage of bombshells, and staff shake-ups and it would likely be naive to think that more weren't on the way.