"And he lies all the time," the "Morning Joe" host said about Donald Trump's inability to recruit top legal talent 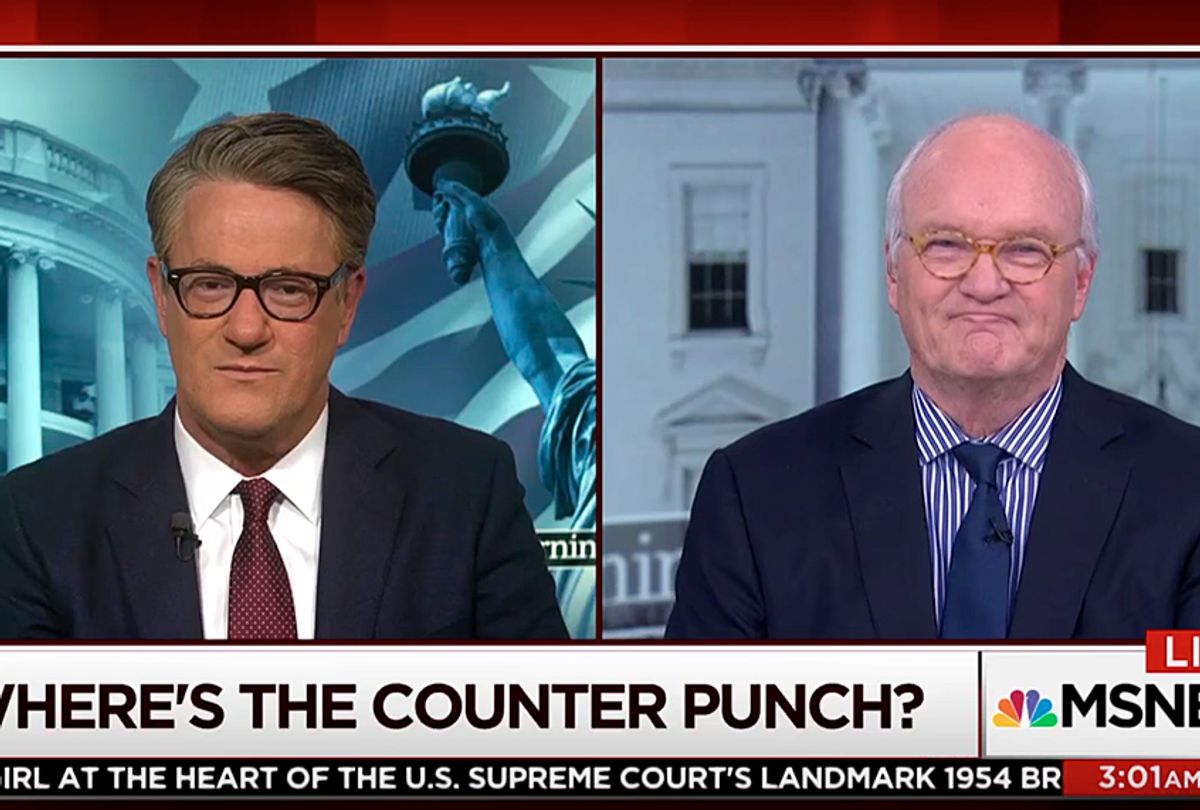 This morning, MSNBC's Joe Scarborough expressed amazement that President Donald Trump has been unable to find a top lawyer to represent him in Special Counsel Robert Mueller's investigation into alleged collusion with Russia during the 2016 presidential campaign.

The "Morning Joe" host said the job of representing the president of the U.S. is "the dream of a lifetime for any attorney," however no lawyers are willing to defend a client who would lie and ignore their advice, tarnish their reputation and then fail to pay the final bill.

"This is the dream of a lifetime for any attorney, to be able to represent the president of the United States," Scarborough said. "Think about it: You're billing hours while sitting in the Oval Office, talking to the most powerful person in the free world. And, yet every lawyer keeps coming back, telling Donald Trump, regardless of the tweets, the same thing, 'No, sir. No thank you. We don't want to have anything to be with you.'"

Scarborough also said no good lawyer would be willing to take on a client that could not be trusted.

"It is very clear, and we've heard it around Washington, we heard [GOP lawyer] Ted Olson talk about it — nobody wants to be this guy's lawyer," Scarborough continued. "They don't want to be his lawyer, because first of all, he doesn't pay his bills. And secondly, he lies to lawyers all the time. They can't trust him going into court."

Dowd's departure has raised questions about the direction of Trump's legal strategy, as the special counsel continues to inch closer to the president and his inner circle, Scarborough said, and as his legal team has turned into a one-man operation.

"This is a president that is going into the legal battle of his life, and it's — he's basically unilaterally disarmed himself," Scarborough said.

The "Morning Joe" host added that, while there are many things a lawyer can tolerate, being lied to isn't one of them.

"The one thing a lawyer can't put up with is being lied to when it's you and your client in the board room, and you're just talking and going through the facts," Scarborough said. "You just sit down with your client and say, 'You've got to tell me everything, and whatever you tell me doesn't leave this room. But I can't prepare for your case unless you tell me the truth about everything, so surprise me now. Do not surprise me in the court room.'"

"And, yet, here's Donald Trump knowing that any lawyer he gets, he believes he's smarter than that lawyer," he added. "He's going to lie to him, and then there's no way he can mount any defense for Donald Trump."

In response to speculation and news reports that Trump's legal team is in shambles, Trump, perhaps unsurprisingly, tweeted that he is "very happy" with his existing legal team and stressed there was "NO COLLUSION" during the 2016 campaign.

"Many lawyers and top law firms want to represent me in the Russia case," Trump said. "Don't believe the Fake News narrative that it is hard to find a lawyer who wants to take this on. Fame & fortune will NEVER be turned down by a lawyer, though some are conflicted."

"Problem is that a new......" he added. "....lawyer or law firm will take months to get up to speed (if for no other reason than they can bill more), which is unfair to our great country - and I am very happy with my existing team. Besides, there was NO COLLUSION with Russia, except by Crooked Hillary and the Dems!"