A killing in Baton Rouge: "Negrophobia" and the death of Alton Sterling

American law enforcement, as designed: Police officers who killed Alton Sterling will not be charged with any crime 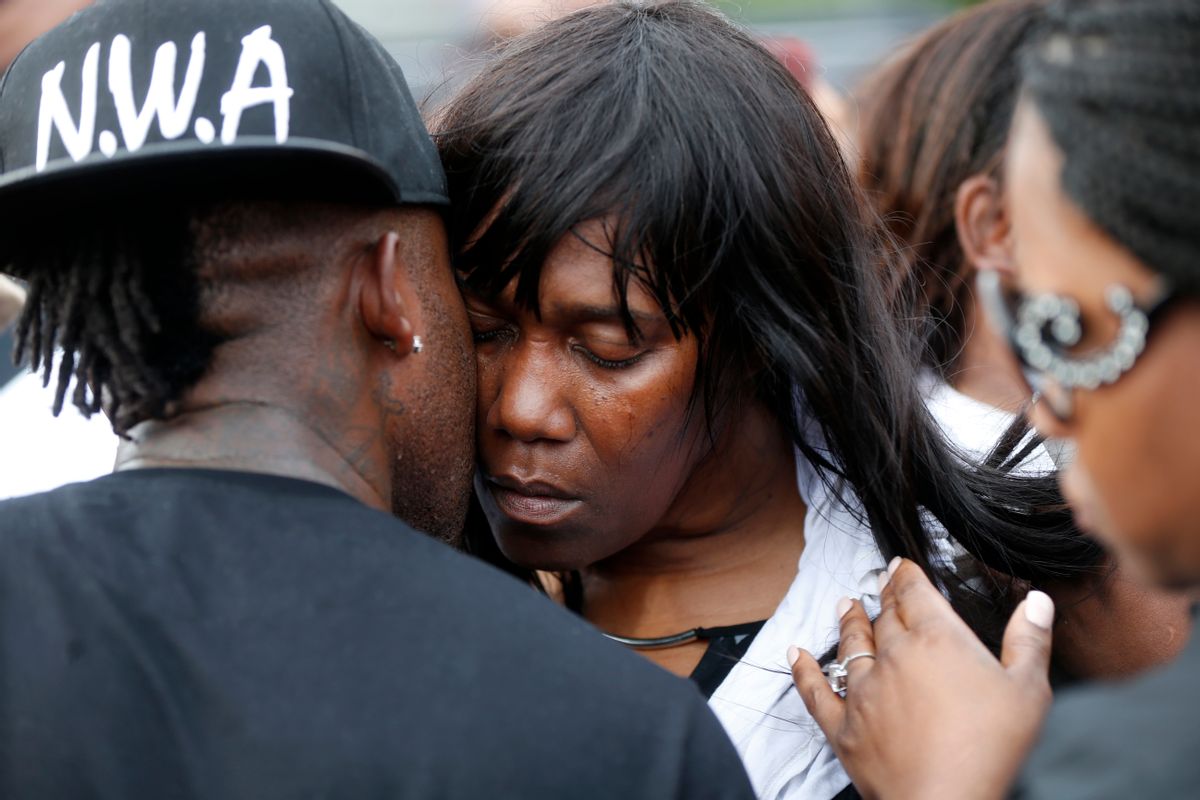 Sandra Sterling, aunt of Alton Sterling, is comforted at a vigil outside the Triple S convenience store in Baton Rouge, La., Wednesday, July 6, 2016. Sterling, 37, was shot and killed outside the store by Baton Rouge police, where he was selling CDs. (AP Photo/Gerald Herbert) (AP)
--

Alton Sterling was selling CDs outside a Baton Rouge, Louisiana, convenience store on the evening of July 16, 2016. He was well-known and liked in his neighborhood. The store owner considered Sterling a friend and had gave him permission to set up shop. The local police were notified that there was a black man outside the Triple S Food Mart with a gun. Officers Howie Lake and Blane Salamoni were dispatched. Both of them are white men. Within 20 seconds of arriving on the scene Salamoni pointed his gun at Sterling's head. After a struggle, the officers shot Sterling three times in the head and then three times in the back. He died at the scene. Lake and Salamoni claimed that Sterling had a gun on his person. (It is not illegal in Louisiana to own or carry a firearm.)

The two officers further claimed that Sterling was reaching for his weapon. This claim has been disputed by eyewitnesses, including the store owner. Lake and Salamoni were subsequently put on leave while local and federal authorities determined if they would be charged with any crimes in connection with the death of Alton Sterling.

On Tuesday, Louisiana Attorney General Jeff Landry announced that Howie Lake and Blane Salamoni will not be charged with any crime. “The officers’ concern" that Sterling "was armed and dangerous was in fact subsequently verified and correct,” Landry said.

Such an outcome is no surprise. This is the American legal system working exactly as designed. It is a form of social control, and the police are its enforcers. They protect the interests of the rich over those of the poor, impose the will of the powerful on the weak and help to maintain America's racial hierarchy through violence.

At the core of Landry's exoneration of the police who killed Alton Sterling is a basic belief that has existed since before the founding of America and continues to the present: Black people, especially black men, are inherently scary, violent and dangerous. In many ways, negrophobia is a founding principle of the United States. It is enshrined in the Constitution, as seen in the three-fifths clause, protections for the slave trade and enforcement of fugitive slave laws.

Negrophobia is, of course, based on lies and cruel distortions. Like racism and white supremacy more generally, it is almost a type of witchcraft or magic. But unlike witchcraft and magic -- ideas that have largely been discarded by Western modernity as primitive and backward, not worthy of serious discussion -- negrophobia lives on as a powerful social force.

In its most ridiculous form, negrophobia is channeled by the belief that black people have higher pain tolerances than white people, possess superhuman or extraordinary powers and are closer to being animals (especially apes and gorillas) than fully human.

In its more quotidian form, negrophobia is channeled through racist stereotypes and beliefs that black people are lazy, inherently violent, less intelligent or naturally criminal, and that they lack the "impulse control" and "culture" of "regular," "normal" middle-class (white) people.

Negrophobia can also be understood as a type of funhouse mirror. Its existence is predicated on the dangers of "blackness," in a world where to be "white" is to be inherently good, safe and normal. This is a dangerous delusion, especially considering that in the history of the United States white people have inflicted far more violence on nonwhites than the other way around.

When police interact with black and brown people, the power of negrophobia is proven by the data: White police officers are much more likely to use lethal force against black and brown people than against white people in similar circumstances. Social scientists and others have shown that police exercise more restraint when deciding to use both lethal and non-lethal force against whites. The ennobling power of negrophobia for whiteness is also demonstrated by the litany of examples where armed white people -- even those who have committed murder or other violent acts -- are arrested without any use of lethal or overpowering force.

The miraculous power of negrophobia can transform unarmed black people into bestial villains who strike fear into America's heavily armed and militarized police. Thus a moral and ethical perversity: By that logic, black people are always somehow responsible for their own victimization. Sociologist Alfred Young explains this in his new book "Are Black Men Doomed?":

Indeed, the ability to live healthy lives is not all there is to the contemporary crisis for Black males. It also includes the inability to be accorded dignity in death. Consequently, a present-day condition of the crisis of Black males is that the literal assassination of the Black male body is now coupled with a thorough character assassination.

This is true not just of black men but for black women, boys, and girls as well.

To fully grasp the power of negrophobia, one must understand that it does not and cannot exist in isolation. Negrophobia hangs on a scaffolding of structural and interpersonal violence mediated through racism and white supremacy.

Alton Sterling, like so many other black people in America, was a direct victim of state-sponsored violence. That violence also traumatizes black people as a group, thus creating a condition of racial battle fatigue where fatalism, lamentation and exhaustion combine with justified anger.

Black residents of the community where Alton Sterling was killed explained this to the Guardian:

Some were saddened, others angry. Some wanted to show up to “do something positive.” None could register much in the way of surprise.

“I knew nothing was going to happen after what happened with the last one,” said Queen Shakur, referring to the federal decision not to indict the officers that was handed down last summer.

Authorities in Baton Rouge spent Monday night fortifying parts of the city, throwing up barricades and installing floodlights. They called in reinforcements from other parts of Louisiana, in case people took to the streets. But no demonstrations arose. Out front of police headquarters, as in the rest of the city, all was quiet.

“The people wasn’t going to tear up the city because, let me tell you, the people, we already knew the verdict,” said Rosalyn Scott, another resident who had come to the Triple S.

Scott said she remained hopeful that at the very least Salamoni would be fired at the conclusion of an administrative review. But it was a hope that could only be expressed in the most cynical of terms.

There has been much progress in the United States along the color line from when black people were formally enslaved in Virginia during the 17th century through to the post-civil rights era. But the story of race in America is also one of continuity, where racial liberalization and freedom has consistently been opposed by systemic white supremacy and individual white racism.

One of the most enduring points in this American journey is that black and brown people know what it is like to be terrorized by their own government. White Americans as a group have never experienced such a sense of threat and anxiety.

When black Americans see Alton Sterling and other black people being executed by America's police, it fuels a kind of existential dread. By comparison, when many white Americans reflect on such events they are understood as mistakes or errors. Alternatively, in the twisted gaze of the worst kind of racial paranoid thinking, black people who are killed and abused with near-impunity by America's cops "had it coming" or "deserved it."

There will be more cases like that of Alton Sterling, Stephon Clark, Danny Ray Thomas, Terence Crutcher, Eric Garner, Tamir Rice and Rekia Boyd. Why? Because on a basic level white America accepts them. The police are the so-called thin blue line who protect "us" from "those people." On the surface such language appears to be "race neutral." In practice it almost never is.