Crime fiction came naturally to “You Were Never Really Here” author, Ames, who admits, sure, he's made mistakes 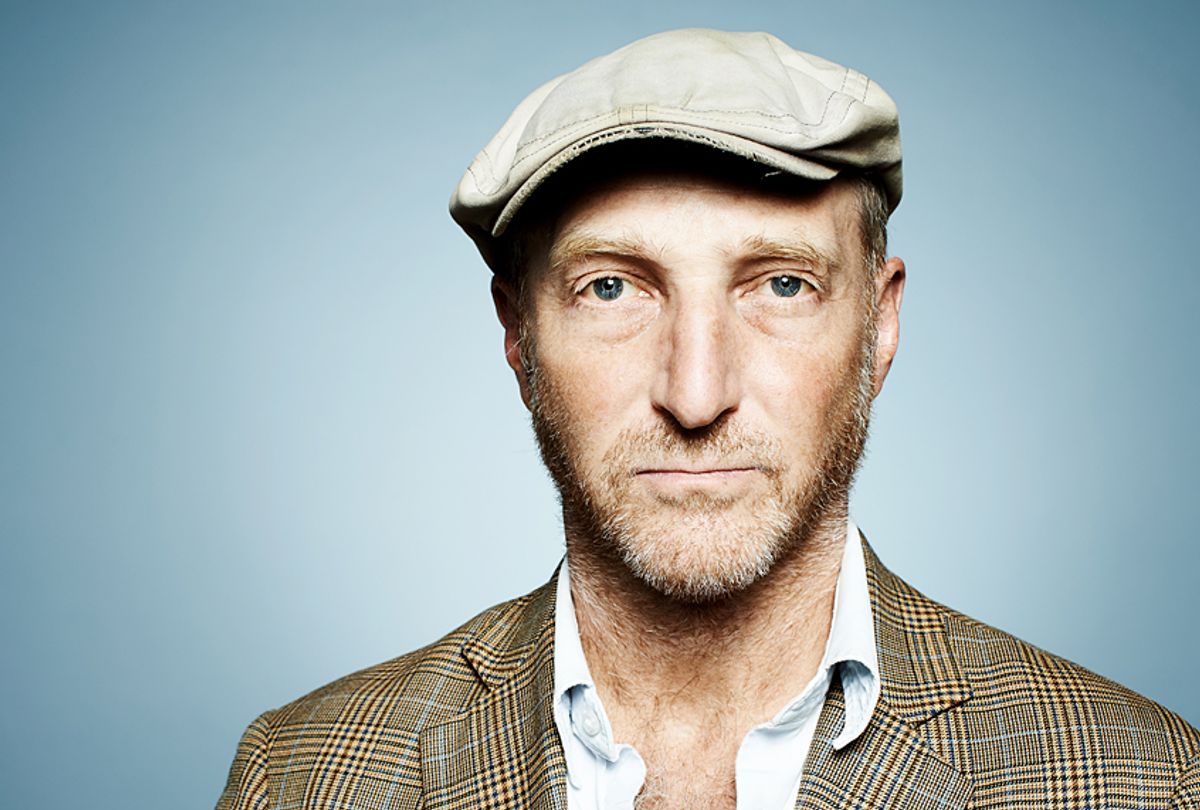 Author Jonathan Ames is not known for crime fiction, but his nifty little thriller, “You Were Never Really Here,” has generated some real attention as the source material for writer/director Lynne Ramsay’s new film, which won two prizes at the Cannes Film Festival last year and is being released theatrically next month.

Ames may be best known for his HBO series “Bored to Death,” which recounted the trials and tribulations of a character named Jonathan (Jason Schwartzman), a frustrated writer, who works as a private detective. But most of his fans howl (or cringe) at Ames’s non-fiction essay collections, such as “What’s Not to Love,” and “My Less Than Secret Life,” among others, where the author reveals intimate details to readers. His fearlessness — perhaps it’s recklessness — articulates what folks may think but are too afraid (or polite) to express.

Ames also has cred as a comic novelist who penned “The Extra Man” and “Wake Up, Sir!” The former was adapted (by Ames) into a 2010 film; the latter was done in the style of P.G. Wodehouse.

Not too shabby for an author whose first novel, “I Pass Like Night”—published nearly 30 years ago—stemmed from his senior thesis at Princeton, where Joyce Carol Oates was his advisor.

The author chatted with Salon about his writing, his regrets, and “You Were Never Really Here.”

While you had a private detective character in your HBO series “Bored to Death” you’ve never written a crime novel. “You Were Never Really Here” is a bit of a departure for you in that it’s a thriller and most your books have been more comedic, or personal and sexual. What prompted this novel(la)?

I have a fascination with page-turners and most of those [kinds of books] were thrillers and mysteries. I was fascinated with Dashiell Hammett and Raymond Chandler and David Goodis. [Actor] Jeff Garlin, who asked me for some advice for a memoir he wrote, suggested to me that I read Richard Stark, a pseudonym for Donald E. Westlake. He said, “You’ll thank me someday.” And I did. And I’ll thank him again in this interview. He did two favors for me. First, he cast me in “Curb Your Enthusiasm,” and second was Stark.

While I was doing “Bored to Death,” I began reading Stark. I read him for several years. There were 24 books in his Parker series. In 2012, a friend of mine, Amy Grace Lloyd — I dedicated “You Were Never Really Here” to her — asked me to write for “Byliner,” which was publishing longer form pieces. It was nice word count and money, so I thought I’d try to write a thriller and [be] non-comedic. I wrote it in 2012, and in 2013 it came out as an e-book. This summer I re-entered the book and fleshed out some scenes and added 20 new pages. “You Were Never Really Here” came out of a love of this kind of book and writing. I wanted to produce something similar.

“You Were Never Really Here” is not the first book of yours to be made into a film — that would be “The Extra Man.” What can you say about the experience of seeing your work brought to the screen? It’s what every writer dreams of, yes?

I don’t know if every writer dreams of it. It’s one of the dreams of writers. The first dream is to hold their published book in their hand. They do dream of this, because they are hoping to make money from the movie adaptation. I was thrilled with both movies, “The Extra Man” and “You Were Never Really Here.” With “The Extra Man,” I got to see autobiographical scenes come to life, such as a scene in the Russian Tea Room. I was an extra on set for that, and to be in the Russian Tea Room in 1993 when I had the real-life experience. Then in 1998, the book comes out. Then in 2009, there I was again while they were filming. Art was imitating life!

With “You Were Never Really Here” it was a less personal book — though certain elements of it are autobiographical. The main character’s relationship with his mother mirrors my relationship with my great aunt, who passed away. I love what Lynne Ramsay and Joaquin Phoenix made, which is operatic and strange. It’s loyal to the book, but very much its own thing.

While you wrote the screenplay for “The Extra Man,” you weren’t involved with adapting “You Were Never Really Here.” Can you discuss that?

Lynne wanted to write it on her own and I was happy to let her do that. She’s a very visionary filmmaker. She did consult with me on the script. She sent me drafts over two years and I gave her my thoughts and input, but mostly I encouraged her to find her own way with it. I was a producer. It won Best Screenplay at Cannes. It would have been nice to share that credit, but she did a brilliant job.

How much of Joe, the lead character (played by Joaquin Phoenix in the film), aligns with your own character? I’m not suggesting you go around using a hammer as a weapon as he does. He considers complete erasure, and later observes, “I’m not functioning right.” I did think of you when Joe “hated his own mind” fantasizing about putting McCleary’s toes in his mouth.

When I wrote the book, it was meant to capture how I was feeling at the time. I was going through my own little dark period. The outer circumstance of his life — what Joe does — couldn’t be further from mine, but his interior life and obsessional thinking were emblematic of where I was at the time of writing — and where I still am. It might sound like a cliché, but Joe is me looking in a shattered mirror at myself.

Let’s talk about legacy, because the title, “You Were Never Really Here” kind of negates one’s existence: You have had kind of a remarkable life/career. As a student at Princeton, Joyce Carol Oates was your senior thesis advisor. After college, you drove a cab for a spell. You were once photographed by Bruce Weber. You developed mutually exclusive interests in both corduroy and transsexuals. You boxed as “The Herring Wonder.” You have been a showrunner for two cable TV series. What observations do you have about your legacy?

[Laughs]. I love my two years driving a taxi! I thought of driving Uber at night, especially since I’m not writing for TV anymore. That could help my expenses. Being a driver makes it hard for me to be a passenger in taxis and Ubers.

You’re able to see a legacy for me in the breadcrumbs of an artist’s life. Hearing you say all that I think, “Wow, I’ve done a lot!” It made me feel kind of good in a way. But in the end, none of us will be here. I didn’t create that title to speak of a legacy — that was something I heard in my own head one time. And so Joe hears a similar voice, in a very dark and low moment, and it says to him, “It’s all right, you can go . . . you were never really here” and it frightens him.

I’ve always been trying to pay my rent with writing and performing, and I’m very lucky I’ve been able to do that. My first book came out in 1989. I’ve had an almost 30-year career. I’ve been fortunate, but it hasn’t been easy — nobody’s life is easy. I had a long stretch between my first book and my second book. A lot of my early work was certainly autobiographical, but I’ve not been writing solely about myself; I was writing to entertain others and make them feel less alone with their struggles. Entertaining others gives me meaning and purpose. The world needs clowns, so I see that as my function to be a clown of sorts; that’s how I can contribute.

You are kind of fearless, which is what I admire about you. You dare where I’m too scared to tread, like boxing. I’m fascinated by it, but I would never do it!

I went into boxing, which sometimes I regret, because you hear about concussion syndrome. I took a lot of shots to the head. I thought Joyce Carol Oates [who has written on boxing] would be proud of me for boxing. When I told her she said, “Don’t do that anymore! You need your mind!” That was quite the warning!

I did two crazy things in my life. One stunt I did was I had a knife thrower, Throwdini, throw knives at me at a bookstore signing. Then, two years later I recreated that scene at the same bookstore with the same thrower with Jason Schwartzman for “Bored to Death.” Jason got rubber knives, and I got real ones. I thought: What was I thinking? I just remember closing my eyes.

What was the second one?

The other crazy thing was getting completely naked in “Bored to Death.” That was an insane thing to do. I think I was the first showrunner to do full frontal nudity. That was mad of me — especially because the air conditioning couldn’t have been colder that day; that was wildly humiliating. Zach [Galifianakis] whipped out his phone and took a picture of me. HBO made me cut the best moment of Zack grabbing hold of my genitals and realizing it. It was really funny. They cut from my face to his face. There were numerous emails between me and HBO with the words “Cock Grab” in the subject. It may be in the DVD extras.

You once notably hosted a phallic building contest. Are you still receiving entries?

I’ve not received any entries — is that a double entendre? — in several years. The contest doesn’t get mentioned much anymore. It’s still on the web. My friend at Cabinet magazine [hosted it]. The Water Tower in Ypsilanti, MI, won.

It stemmed from the fact that I wrote a diary of my life for Slate. I declared the Williamsburg Bank Building was the most phallic, and I got email and others disagreed with me. We got hundreds of submissions.

It’s an example of you articulating something we all think.

Or I’m lacking a necessary filter. I regret some of the things I used to write.

I vividly recall your essay “Bice” from one of your books, which really disturbed me.

That’s about nose picking. I have a friend who can’t bear any discussion of the human nose. We all have such dilemmas!

Throughout your work you cite authors, like Fitzgerald and Hemingway and Bukowski on “Bored to Death.” Your crime novel might get comparisons to Hammett or Chandler. You teach writing from time to time. Can you talk about writers that influence you?

All the writers you mentioned impacted me. Writers are always looking to steal, borrow, or learn from everyone they read. I’ve certainly done that. The writers that have the most impact on me were P.G. Wodehouse and Donald E. Westlake. I was so in love with Wodehouse my novel “Wake Up, Sir!” was a homage, and my entry into thrillers was for Westlake. And Joyce Carol Oates has had enormous impact on me as a teacher and writer.

Since you’ve consistently reinvented yourself over your career, what’s next?

I am trying to write this sequel to “You Were Never Really Here” to see if I could write another thriller. I have this fantasy of being a pulp writer. My other books took longer to write. I’d like to write something comedic again, I’m missing that. Maybe I’ll become a thriller writer for this next chapter of my life. That would be a fun iteration if I could pull it off.