We have failed our kids: Is it time for a Young People's Campaign?

50 years ago, MLK fought against poverty. Are the Parkland protesters showing us it’s time to focus on the young? 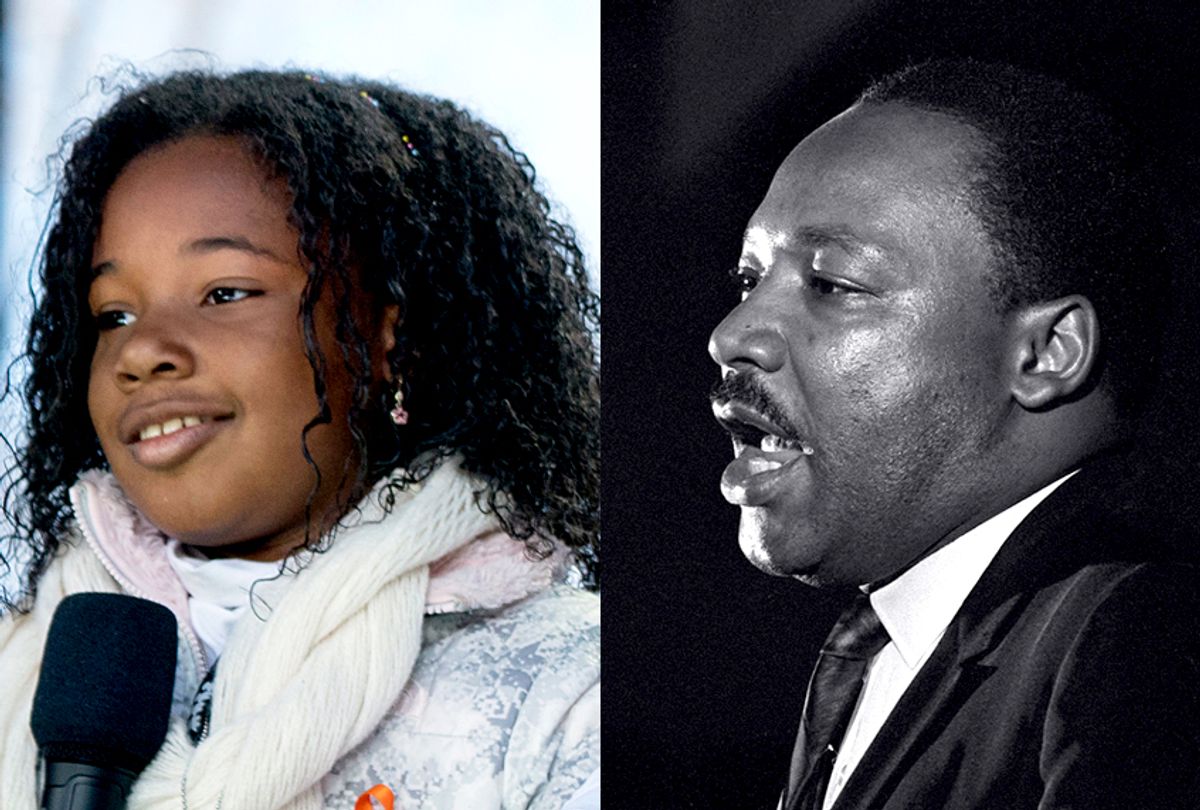 There was a surprise guest at the March for Our Lives event. Nine-year-old Yolanda Renee King took the stage to say that she, too, had a dream. Addressing the massive crowd of protesters, she said, "My grandfather had a dream that his four little children would not be judged by the color of their skin but by the content of their character. I have a dream that enough is enough, and that this should be a gun free world, period." It was a stunning moment in the midst of an extraordinary event. And it helps highlight a key way that the rise of youth protesters in the wake of the Parkland shooting dovetails with the upcoming 50th anniversary of Martin Luther King’s assassination.

There is little doubt that the focus of the protests is gun legislation, but there is a second feature of this movement — and that is the idea that adults have failed the nation’s youth. The Parkland protesters are quoted repeatedly saying that “the adults have let us down.” Those failures, however, are not limited to the failure to institute sensible gun legislation in this country. As Helaine Olen puts it, the student protests have made it clear that “We are failing them in ways that go far beyond our failure to protect their schools from gun violence. We have failed to provide our children with a society that values their lives or well-being.”

One can only speculate what Martin Luther King would make of these new struggles. But given the fact that these protests are emerging almost 50 years to the day when he was engaged in his campaign against poverty, it is worth taking a moment to reflect on what this new era of struggles tells us about the challenges facing our nation.

Recall that when King was murdered in Memphis, Tennessee on April 4, 1968, his work was taking a turn. Back in December of 1967 he had announced that he was fighting to support “The Poor People’s Campaign” to gain economic justice. That initiative brought him to Memphis in April 1968 to support the struggle of the poor and black sanitation workers who were on strike.

Highlighting what he saw as the triple evils of racism, economic exploitation and militarism, King had opted in his final days to focus on economic inequality. As he put it in a speech to the Hungry Club Forum, “Some 40 million of our brothers and sisters are poverty stricken, unable to gain the basic necessities of life.” Poverty wasn’t new, he warned. What was new was that we had the resources to fight it. The only question was whether we had the will.

Now, 50 years later, there is a new facet to poverty in this nation: It overwhelmingly affects the young. The rise in childhood poverty helps underscore the fact that today it may well be the nation’s young who face the greatest challenges of any demographic.

While childhood poverty tends to be higher than the national average, the percentage of poor children has grown disproportionately. Since the mid-1970s, children have been much more likely than adults to be poor. Research shows that nearly 4 in 10 children are poor for 1 or more years before they reach age 18. More than 1 in 10 are poor for half or more of their childhood years, and according to the #endpoverty Poverty Initiative, "half of all children will be on food stamps before they turn 20, including 9 out of 10 African American children."

And in Memphis, the city where King died fighting to end poverty, it is even more dire. In 2016, Memphis held the top spot in the child poverty rate. According to research by Elena Delavega, 48.3 percent of African-American children in Shelby County, where Memphis is located, live in poverty. That's almost half of all children, and it's more than four times higher than the percentage of white children in poverty in the county: 11.4 percent.

As Sarah Lockridge-Steckel, founder and CEO of The Collective, an NGO dedicated to supporting young adults in the Memphis area, explains, at the 50th anniversary of Dr. King’s assassination, “we are still fighting for the same things.” She points out that Memphis has 45,000 young adults who are out of school and work. Only 1 percent of those young adults will obtain an associate degree by the time they are 28.

But arguably the fight in Memphis today is not for the same things King championed, because he could never have envisioned how thoroughly we would fail to provide for our nation’s young. The reality that almost half of African-American children in the Memphis area, and more than one third across the country, live in poverty is staggering. And the fact that the national poverty rate for all children in the United States is over 20 percent is astonishing. It puts the United States near the bottom of the developed world in providing for its young. It’s not just young kids that are suffering from hunger and economic precarity; an estimated half of all college students struggle with food insecurity alongside their massive levels of debt.

King didn’t fully witness the rise of neoliberalism, which brings a cruel capitalist ethos that refuses to recognize any social victims and which resists any public efforts to address public crises. Students are treated as either lazy, entitled or dangerous. Back in October, I wrote a piece for Salon on the surprising level of corporal punishment taking place in our schools. That research showed that in 2013, 59 percent of black students and 32 percent of white students received corporal punishment.

But it isn’t just the sheer magnitude of the threats to our kids that matters; it is the overwhelming indifference to their pain and the outright refusal to care for them that should shock us. When kids are victims of gun violence they have politicians like Pennsylvania Senator Rick Santorum lecture them that they need to solve their own problems, “How about kids, instead of looking to someone else to solve their problem, do something about it . . . ?”

As Henry Giroux explains in a piece detailing how the Parkland shooting was about more than gun violence, “A culture of cruelty, silence and indifference to the needs of children, built on the backs of the conservative media politicians and the gun industry and lobby, has become a central and ethically disturbing feature of American society.”

This means that the threats to our nation’s children go well beyond the gun debate. As the National Center for Children in Poverty put it, “Research is clear that poverty is the single greatest threat to children’s well-being.”

But rather than determine which threat is the greatest to our nation’s young, perhaps it is time to take seriously the various ways that we have failed to provide our children with an environment within which they can thrive. These threats are of a piece. By every single metric of security, stability and prosperity our kids are struggling and suffering at levels that are a disgrace and only showing signs of worsening.

And that’s where King’s vision comes in. For him, the struggle against poverty was a struggle for dignity. Well before the term intersectionality was in play, King understood that abuses of power, marginalization and oppression take many forms as they intersect and overlap. He understood that the key struggle was for the opportunity to be recognized as a human being deserving rights, respect and care. Our young are in poverty; they are in danger; they are in debt; they are unemployed; and they are bullied when they stand up for their rights.

These last weeks have seen an historic surge in political activism made noteworthy by the fact of its youthful leadership. Never before in the history of our nation have we seen such a rise of political action helmed by those who are not yet old enough to vote. Never before have our nation’s young been so vulnerable and so ready to fight to change it.

This is why the appearance of young, yet powerful, Yolanda Renee King at the March for Our Lives Event is both inspiring and tragic. That she should have to stand before crowds at the age of nine and say obvious things to adults who have failed to fight on her behalf is tragic. But the fact that she had the courage and conviction to do so at such a young age may well be a sign that the next major social movement in this country will be focused on a young people’s campaign.