With the American people fractured over their trust of the media, President Trump is eager to exploit it for allies 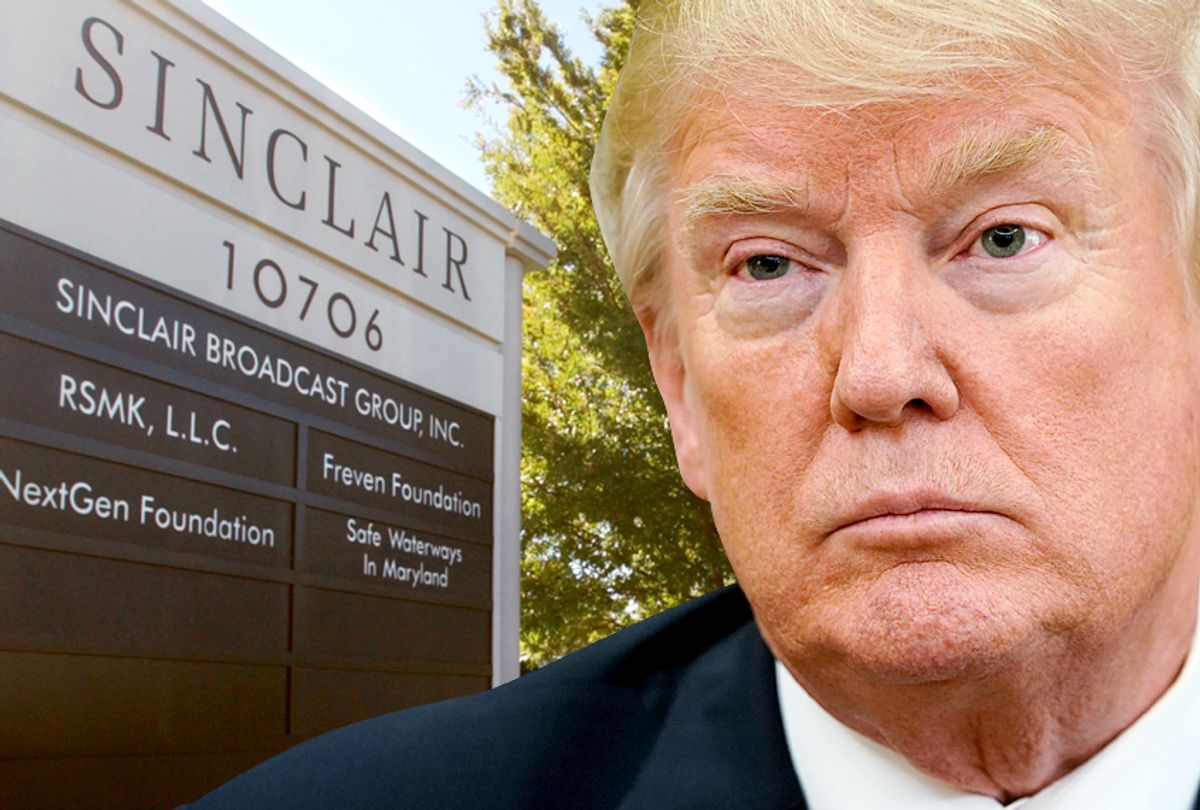 President Donald Trump took to Twitter on Monday morning to stand up for the Sinclair Broadcast Group, which is in the middle of a bad news cycle for forcing all of its anchors across the country to read from the same propaganda script.

Here's what the president tweeted Monday:

Sinclair has been requiring the nearly 200 local news stations that it owns to read from a right-wing script during their broadcasts. Many of the local networks were unhappy with this decision, and last week Deadspin created a compilation video of clips from various Sinclair-owned stations which showed them mouthing the same lines that had been sent to them as "must runs." The running theme was that other news outlets used "fake stories" — a clear reference to Trump's regular use of the phrase "fake news" to disparage media outlets which write unflattering things about him.

One line in the script read:

The sharing of biased and false news has become all too common on social media. More alarming, national media outlets are publishing these same fake stories without checking facts first.

Commentators like John Oliver have pointed out that there was a two-pronged problem with Sinclair's ability to force local news outlets to read from their right-wing scripts: It allowed a large corporation to manipulate local media outlets into spreading a pro-Trump message, such as by forcing them to air commentary clips by former Trump adviser Boris Epshteyn. And, given that Sinclair Broadcasting is claiming that other media outlets spread fake news, it is ironic that they are shoehorning their own biases into ostensibly impartial broadcasts.

"It sickens me the way this company is encroaching upon trusted news brands in rural markets," one investigative reporter from Sinclair Broadcasting admitted to CNN.

Journalist David Zurawik, who has covered local television for roughly 30 years, denounced Sinclair's actions as far back as July, arguing at that time that the pernicious aspect of Sinclair's actions was that they were sending people pro-Trump messages in a forum that they had previously been able to trust.

Despite the increased attention to Sinclair Broadcasting's propagandizing efforts, the Federal Communications Commission is still deciding whether to approve the corporation's takeover of Tribune Media, which would increase its hold from 193 local news stations to 233 local news stations.

But there's not all good news. Every partisan group has grown to distrust media outlets on the grounds that they think they promote "fake news." This includes 89 percent of Republicans, 82 percent of independents and 61 percent of Democrats, with each group rising from between 12 and 18 percent over the past year. The regular drumbeat of accusations that certain media outlets peddle "fake news" has also led to dire real-world consequences. In January, a 19-year-old from Michigan was arrested for making threats against CNN. That same month, Facebook changed its news feed algorithm, unwittingly amplifying the reach of fake news stories. Meanwhile, innocent people like actress Fiona Dourif have been wrongly accused of promoting fake news to hurt conservative candidates, in stories that were themselves entirely fabricated.

The biggest danger of all, however, is that even though Trump hasn't enhanced his own credibility by attacking the media, he has undermined American democracy's ability to protect itself through honest reporting that receives the respect and trust it deserves.

"These findings are troubling, no matter how you define ‘fake news.’ Confidence in an independent fourth estate is a cornerstone of a healthy democracy. Ours appears to be headed for the intensive care unit," Patrick Murray, director of the independent Monmouth University Polling Institute, explained in a statement that was released with the survey's results.