It's official: Laura Ingraham will return to Fox News

UPDATED: Mocking traumatized school shooting survivors is not enough to push the Fox News pundit out of a job 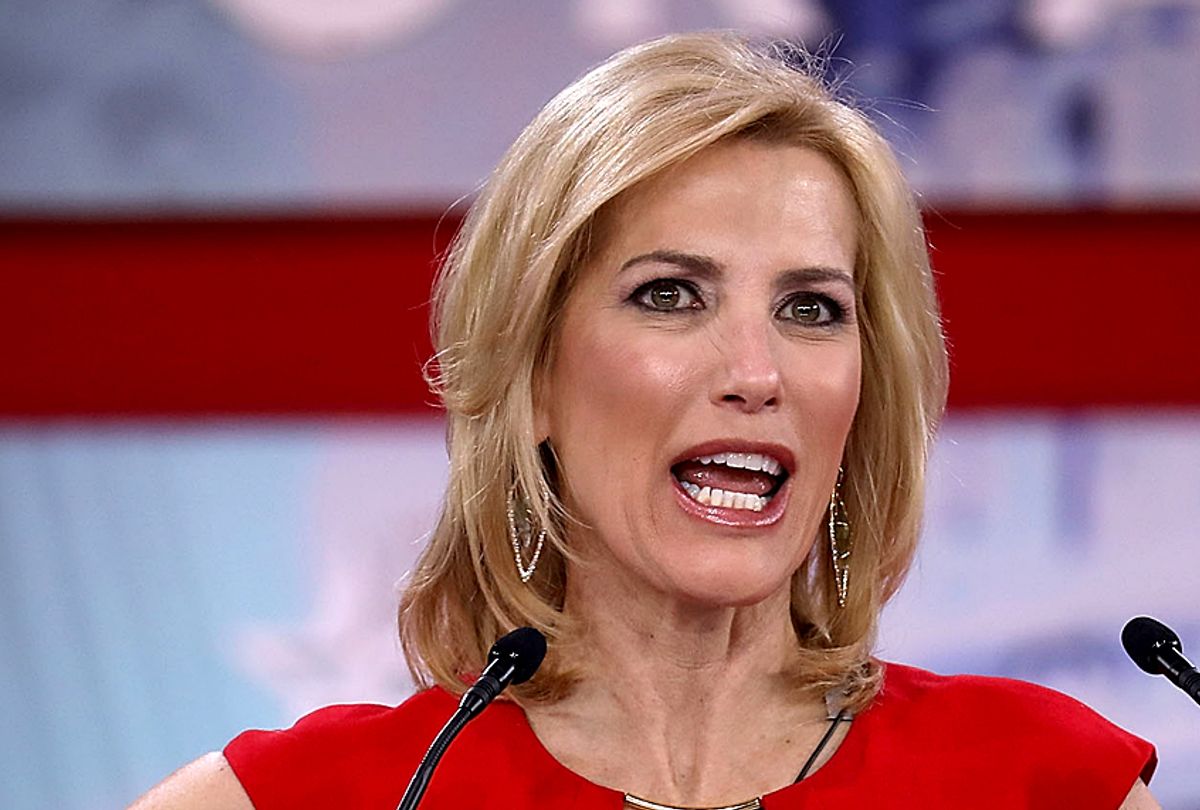 In a case of what can only be thought of as interesting timing, right-wing news personality Laura Ingraham is taking a week off to spend time with her family. The host of Fox News Channel's “The Ingraham Angle” cheerfully announced her spring break on Friday, two days into the fallout resulting from her March 28 tweet ridiculing 17-year-old Parkland mass shooting survivor and activist David Hogg.

David Hogg Rejected By Four Colleges To Which He Applied and whines about it. (Dinged by UCLA with a 4.1 GPA...totally predictable given acceptance rates.) https://t.co/wflA4hWHXY

Ingraham built her stardom on a foundation of hyper-conservative snarking, and she’s rarely seen quarry sacred enough in her eyes to be deemed untouchable. This time, a share of thinking went, might be different. This time she took aim at a kid who, regardless of how quickly his star has risen, is still raw and in the early stages of dealing with a level of trauma of which Ingraham, a best-selling author, popular talk radio personality  and fully-grown adult, has no first-hand knowledge. The 54-year-old slung dirt at a teenage target who happens to be media-savvy and unrelenting in his opposition to anyone standing against his cause. And Hogg knew how to hit Fox and Ingraham back where it hurts: their advertising revenues.

More than a dozen companies have pulled their advertising from “The Ingraham Angle” — large corporations with deep pockets, including Johnson & Johnson, Jenny Craig, Nestlé, Hulu, Liberty Mutual and Ruby Tuesday. Ingraham issued a weak apology afterward, one that Hogg did not accept.

“Unfortunately Ms. Ingraham has discovered that freedom of speech is not freedom from consequences,” former CNN journalist Soledad O’Brien tweeted in response to an assertion Brian Stelter made — that such boycotts can be dangerous — on his CNN series “Reliable Sources” over the weekend.

On that same episode of “Reliable Sources” Baltimore Sun media critic David Zurawik responded to Stelter by pointing out that the Parkland students “have a great moral authority that most people in the media don’t have. And they have it because of what they went through, seeing classmates killed and then having to mourn and bury their classmates and go on with their life."

Zurawik continued, “So, why you would go after someone like that and not expect the fiercest kind of push back that he or she can generate? It doesn’t make sense.”

Ingraham’s vacation, according to Fox representatives, was a pre-planned affair that was on the books for some time. Her week away from “The Ingraham Angle” will grant soft auditions to guest hosts such as Jason Chaffetz and Pete Hegseth while giving Ingraham's bosses time to assess the lasting damage of the current advertiser exodus.

But Ingraham taking "me time" in the midst of a major public relations gaffe isn't the interesting part — the fact that it coincides with the anniversary of Bill O’Reilly’s famous vacation in April 2017 is raising a few eyebrows.  O'Reilly's sudden flight to the beach followed breaking news about the price tag for Fox News to keep his various sexual harassment accusations quiet — more than $13 million. O’Reilly was the face of the channel a year ago, and Fox News' top ratings earner for most of its existence. He had fended off publicized sexual harassment claims before. This time, though, Fox News made his vacation permanent.

This recent history gave some people the impression that Ingraham, too, would be invited to remain at whatever resort where she and her family have ensconced themselves. UPDATE: Not so fast: Monday afternoon Fox News officially announced that Ingraham will indeed be returning to host "The Ingraham Angle."

“We cannot and will not allow voices to be censored by agenda-driven intimidation efforts,” said Fox News Channel co-president Jack Abernethy in a statement reported in Variety. “We look forward to having Laura Ingraham back hosting her program next Monday when she returns from spring vacation with her children.”

One truth that the Parkland survivors have spotlighted is that the hypocritical “hopes and prayers” and excuse-making that politicians use to mask their fealty to corporate interests do nothing to protect the lives of children. Hogg and his fellow student survivors of the Feb. 14 shooting at Marjory Stoneman Douglas High School have used that simple fact to demonstrably amplify their message. They’ve also been quick to slap down conservative detractors by calmly shaming them for behaving more childishly than they do. Over the weekend Hogg very strategically used the term “bully” to describe Ingraham. He also pointed out that Ingraham was very quick to apologize to him but has made no such offer to NBA stars Kevin Durant or LeBron James who, last month, she famously told to "shut up and dribble."

Durant and James are wealthy celebrities and easy marks for Ingraham. In taking a swipe at Hogg, however, she forgets that he’s still a kid who didn’t ask for a horrific tragedy to thrust him upon the national stage. The world is watching how American adults are treating their kids right now, in a time when the nation’s reputation globally has been diminished.

A closer-to-home issue for Fox, however, is that the median age of its primetime viewership in 2017 was 66, according to Nielsen data, remaining unchanged from its 2016 number. If they want to replenish the ranks of an audience that is literally dying off, it may not be a wise strategy to tick off potential future viewers.

That might matter even more to advertisers who want to secure the loyalty of a generation that will soon come into its own buying power. Americans tend to forget the various wrongs companies commit as soon as said companies dream up new products we want want, but surely the likes of Johnson & Johnson see the unflattering meme-making possibilities here. A company that makes baby powder probably shouldn't financially support a person who ridicules a child survivor of a massacre. From a corporate image perspective, better to step clear of possibly being on the wrong side of history than to let those ads ride.

Though an #IStandWithLaura counter-movement is rising on social media (of course) it is being amplified by Russian bots (also of course).

Even so, Fox continues to do just fine in the ratings, regularly topping CNN and MSNBC in primetime. What’s more, Ingraham helms a program that often ranks as the fourth most-watched program in all of cable news, attracting a nightly average of 2.6 million viewers. On the network, her program ranks third in primetime behind “Hannity” and “Tucker Carlson Tonight.”

While popularity didn’t save O’Reilly from a one-way trip to the shed — again, owing to those millions of dollars of hush-money settlements, as well as house-cleaning that bumped off Fox News boss Roger Ailes in the bargain — Ingraham’s obviously saved her. And somewhat ironically, she may want to quietly thank the Ailes and O’Reilly oustings for her reprieve.

Why? As you may have noticed, Fox’s current on-camera bench otherwise lacks a female host as strong as Megyn Kelly, who departed for NBC, or Gretchen Carlson, whose sexual harassment case spelled the beginning of the end for Ailes and others within the company. Nobody’s looking at “Fox & Friends” co-host Ainsley Earhardt to leave that morning couch any time soon. And Jeanine Pirro doesn’t fit the network's — shall we say — aesthetic standards (read: blonde) for its female prime time personalities. Getting rid of Ingraham without an equally popular female host ready to take her slot does not fit Fox News’ primetime strategy.

Besides, Fox News personalities have been taunting children for years without suffering any consequences. Contributors have gone after student protesters at colleges, those bastions of liberalism, with vigor and no one bats an eye. In 2015, the 14-year-old who brought a clock he constructed to school and was arrested for it when administrators mistook it for a bomb gave pundits fodder for days. (Surely it had nothing to do with the fact that the kid’s name is Ahmed Mohamed.)

Even recently Hannity viewers continued to support him after he threw his weight behind Roy Moore, a toxic political candidate and accused child molester. Viewers famously shamed an advertiser, Keurig, when it tweeted its intent to boycott by smashing their own coffeemakers.

Fox News management apparently had no problem with any of that, nor with Tucker Carlson’s recent comparison of the Parkland students to “Mao’s Red Guards,” nor even with Ingraham herself writing off their movement as “nothing but a left-wing, anti-Trump diatribe” two weeks before her snarky college acceptance tweet. This is a network that thinks of the children only when it aligns with their audience’s viewpoint.

It may be more reasonable to expect that Ingraham’s advertiser desertion could change the network's overall tolerance for its hosts punching down at children. But this controversy could also test the limits of the movement’s power and influence over corporate media’s will. Companies may abandon “The Ingraham Angle” now, but in the short-term it could simply mean additional buys on other programs throughout the network’s schedule.

Though it pains me to say it, this boycott appears to be a temporary problem for Ingraham and Fox News. Advertisers still want to be where the eyeballs are, regardless of the political content of the programming they’re sponsoring. Those abandoned ad slots will be filled with other buyers who might take advantage of the situation to get primetime placement at discounted rates.

Our outrages burn bright and quickly these days, and they tend to subside sharply after initial victories in wars that require sustained attention and effort to truly win. Fox News must be counting on emotions to cool in Ingraham’s absence, just as it may be counting on a spike in her ratings upon her return.

The larger question is whether Hogg and his youthful cohort’s moral authority will mean anything in the long run to a news channel that caters to the far-right fringes of the self-styled moral majority.

Note: This story has been updated to reflect a late-breaking development.