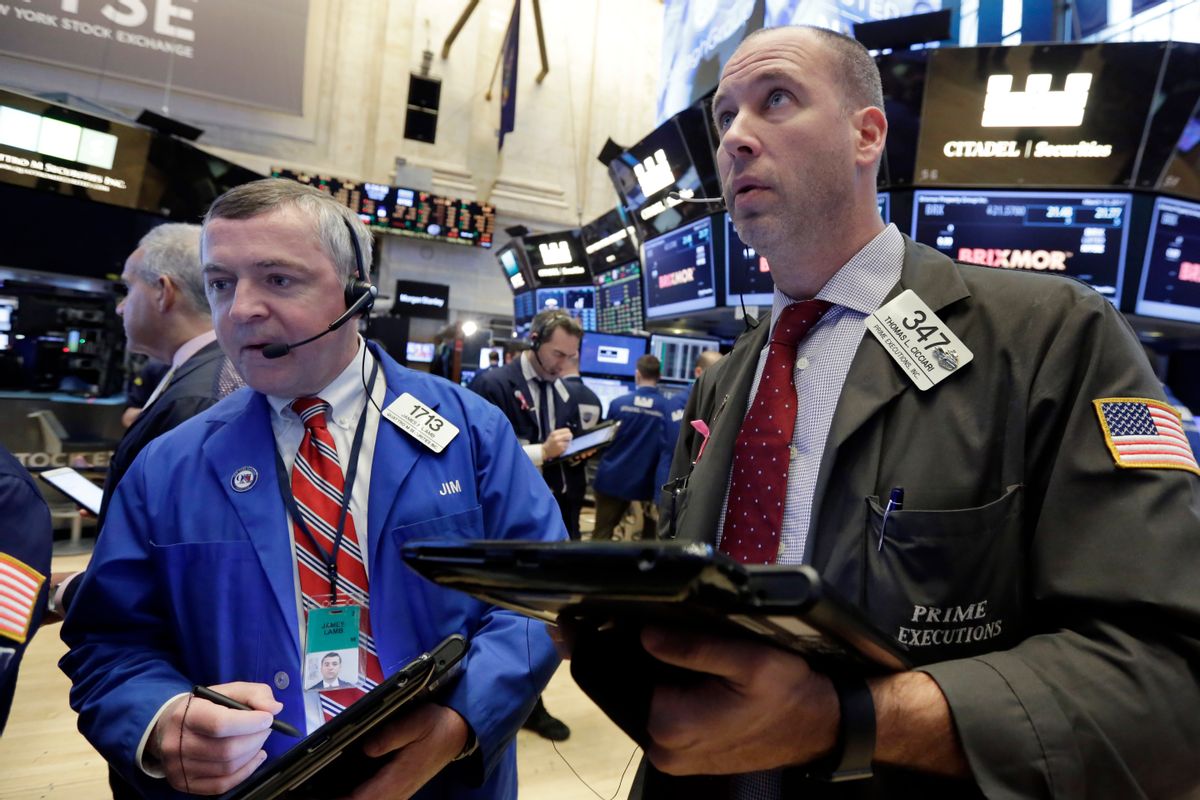 Each day provides us a brand new news cycle, and it's hard to keep up. Here's a short list of the news and notes to keep you informed.

"This is a recipe for disaster": Here's the latest Trump plan to speed up deportations

The Wall Street Journal reports that the Justice Department is trying to get immigration judges to speed up their hearings through evaluations that take into account how efficiently they're doing their job. These metrics are leading to worries that it will subvert judicial independence in these matters:

“This is a recipe for disaster,” said A. Ashley Tabaddor, an immigration judge in Los Angeles who is president of the National Association of Immigration Judges. “You are going to, at minimum, impact the perception of the integrity of the court.”

"The Trump Bump is becoming the Trump Slump"

While stocks are up significantly from President Donald Trump's election in 2016, they've recently begun "correcting," and it seems to have been all caused by Republicans in charge.

First there was the risk that the economy might be growing too fast, which could prompt central banks to hike interest rates sooner than expected. Then there was the risk of a trade war ignited by the White House imposing tariffs on certain products, an action that quickly prompted countries like China to erect trade barriers of their own. Next came the threat of a government crackdown on technology companies, after revelations of their misuse of customer data.

Monday’s dose of unnerving news was a presidential tweet aimed at Amazon, which Mr. Trump accused of hurting the United States Postal Service. Mr. Trump’s feud with the company has been going on sporadically since before he became president, but the onslaught has accelerated lately. On Monday, Mr. Trump tweeted that the Post Office loses money by working with Amazon “and this will be changed.”

Looking forward, we can expect volatility in the stock market, the Times notes — which is a very Trumpian thing to expect.

Scott Pruitt is in a world of trouble

The head of the EPA has kept close ties with friends in the oil and coal industry. Scott Pruitt is also a member of the Trump administration, which means that he's he has tried to use his position for personal gain.

That's why the latest news should alarm you, but not surprise you.

We've been hearing lots of reporting recently over a $50-per-night lease Pruitt made with a lobbyist representing oil and gas intersts — something under Pruitt's direct purview. But a new report from the Times has indicated that, while Pruitt paid little for the room and board, taxpayers paid a lot more.

The clients of lobbyist J. Steven Hart's company, Williams and Jensen, included Canadian energy company Enbridge, which was able to secure the green light for a pipeline that would, per the Times, "allow hundreds of thousands more barrels of oil a day to flow through this pipeline to the United States from Canadian tar sands." But this isn't just the case of an oil company looking to capitalize on the new, anti-green legislative environment. There's more:

The signoff by the E.P.A. came even though the agency, at the end of the Obama administration, had moved to fine Enbridge $61 million in connection with a 2010 pipeline episode that sent hundreds of thousands of gallons of crude oil into the Kalamazoo River in Michigan and other waterways. The fine was the second-largest in the history of the Clean Water Act, behind the penalty imposed after the Deepwater Horizon spill in the Gulf of Mexico.

But Pruitt isn't just in the news because he's cozy with oil lobbyists. He's also spending lots of money on himself. This one comes from the Washington Post, which discovered that Pruitt, who was flying first class only for a while, wanted something a bit more flashy.

The officials, who spoke on the condition of anonymity to discuss internal deliberations, said the agency ultimately did not move forward with the plan because it would have been prohibitively expensive. Pruitt’s aides had contacted NetJets, a well-known firm that leases such planes, and received a cost estimate of roughly $100,000 a month, the officials said.

Because news does not exist in a vacuum, it's important to point out Pruitt's spending has been met by an administration that wanted to severely cut lots of other programs.

“The print media is so left wing as to be meaningless dribble which accounts for why the industry is and will fade away. Just no credibility.”

That is not from President Trump. That's from the head of Sinclair Broadcasting, according to a New York Magazine report.

There's no direct tie between the president and a New York City cop in this story. But it really doesn't look good for the head of the New York City Police Department's sex crimes division.

Michael Osgood donated a total of $2,810 over six weeks to Donald Trump during the president's 2016 presidential campaign committee — including a $500 payment made just four days after the infamous "Access Hollywood" tape leaked.

Per the New York Daily News

Osgood is respected by advocacy groups — just last week the New York City chapter of the National Organization for Women went out of its way to laud his work, even as it was blasting the NYPD’s approach to some sex crimes and the need to bolster its unit with more investigations.

He also led an investigation in 2015 of disgraced producer Harvey Weinstein after a model accused him of sexually assaulting her in his Tribeca office. The Manhattan district attorney’s office, in a controversial decision, decided not to prosecute.

Republicans are planning to link Democrats to Nancy Pelosi and Hillary Clinton this election cycle, but the GOP has its own albatross — the one that lives in the White House.

Here's Gwen Graham, who's running to replace the state's Republican governor, Rick Scott. She calls out Trump by name, with a video description reading, "Donald Trump won't stand in Gwen Graham's way of doing what's right for the people of Florida."

"Trump talks about the most famous building in the world like a nervous tour guide on his first day."

"Trump talks like he's trying to distract a security guard while his friend steals a vase."