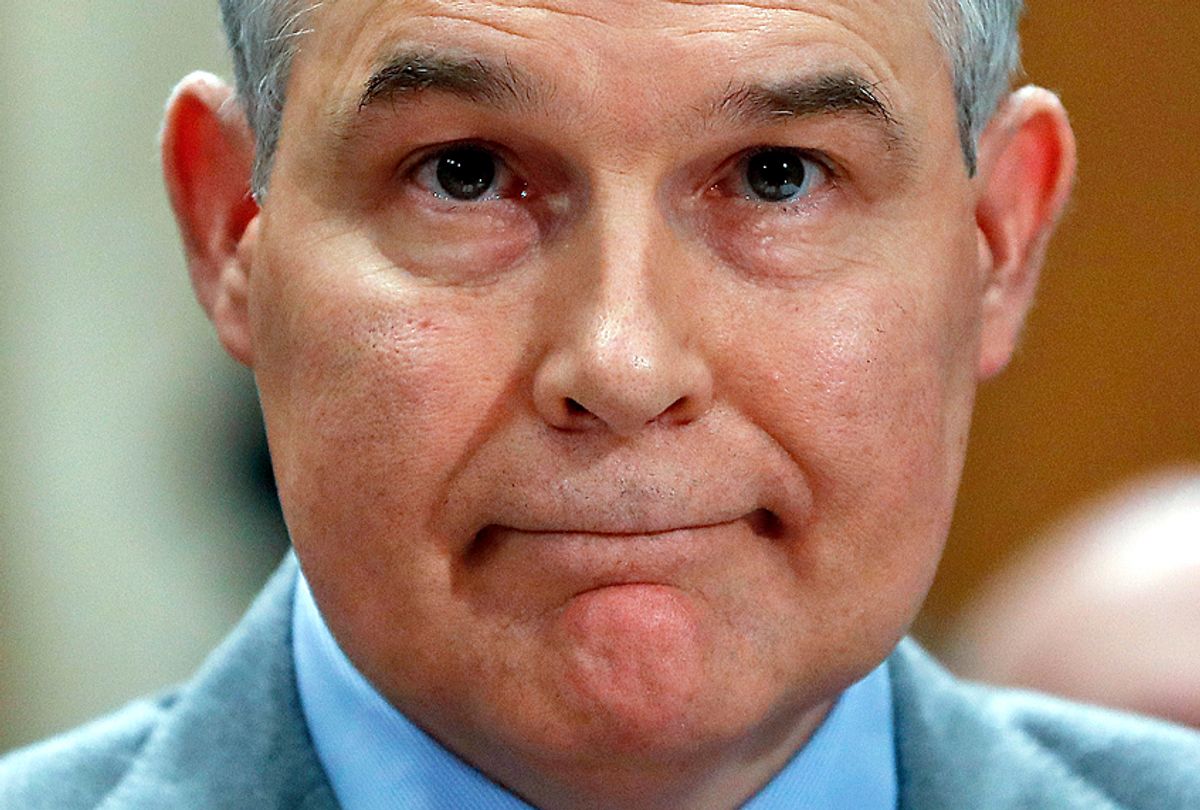 President Donald Trump's Environmental Protection Agency head is in hot water for spending much of his first year in Washington, D.C. living in a Capitol Hill townhouse co-owned by the wife of a major energy lobbyist.

The building's co-owner, Vicki Hart, is married to energy lobbyist J. Steven Hart, according to ABC News. Although the network wasn't able to determine how much money EPA administrator Scott Pruitt was paying to live in the townhouse, it was believed to be roughly comparable to the market rate. If Pruitt was given any kind of advantage in terms of pricing for the townhouse, that could be construed as an improper gift.

The property is owned by a limited liability company that is associated with an address owned by the Harts. J. Steven Hart told ABC News that although his wife is a co-owner, she is not the majority owner. He refused to identify her business partners.

In addition to the ethics concerns, the townhouse situation raises serious questions about whether Hart has actually been able to influence Pruitt's policies.

Williams and Jensen, the lobbying firm of which Hart is CEO and chairman, represents among other clients Cheniere Energy Inc., which paid Hart's firm $80,000 a year to lobby about "issues related to the export of liquefied natural gas (LNG), approval of LNG exports and export facilities," as well as about policies like the Clear Air Act.

During a trip to Morocco in December 2017, Pruitt advocated "the potential benefit of liquefied natural gas (LNG) imports on Morocco’s economy." Ironically, this was the same trip to Morocco that was lambasted by ethics watchdogs for being too expensive, lumping Pruitt in the same category as other Trump administration officials with scandals related to alleged inappropriate use of taxpayer money, including former Director of Health and Human Services Tom Price, former Secretary of Veterans Affairs David Shulkin and Secretary of Housing and Urban Development Ben Carson.

Yet while Pruitt's travel-related expenses scandal is nothing new, and stretches well beyond his trip to Morocco, that journey was noteworthy because it may have fallen outside the EPA's traditional mission. Environmental groups and members of Congress have both criticized Pruitt's trip on the grounds that the Department of Energy is the agency usually entrusted with dealing with issues like the exportation of natural gas.

Pruitt has had other ethics-related controversies since becoming the head of the EPA. In September it came out that Pruitt was seeking nearly $25,000 on a soundproof communication booth for his office, one that an acoustic sales consultant with the company manufacturing the booth described as "essentially a secure phone booth that couldn’t be breached from a data point of view or from someone standing outside eavesdropping." Pruitt was also found to have regularly met with energy executives since beginning his job, a decision that his office defended on the grounds that "as E.P.A. has been the poster child for regulatory overreach, the agency is now meeting with those ignored by the Obama administration."

Pruitt has also come under fire for purging information about man-made climate change from the EPA's website and has even been rumored to be planning to create unrealistic standards on the scientific studies which can be used to support regulations that fight climate change. The EPA administrator has also presided over a period in the agency's history in which it has become opaque about releasing information, attacked journalists and media outlets it dislikes and even blocked reporters from attending agency events.

In other words: Pruitt has been a controversial EPA head since the moment he was picked by Trump. He has a number of ties to the industries he's supposed to regulate and has made scientists and EPA officials who won't tow the line of the corporate interests he has chosen to represent feel so unwelcome that many have left. The fact that he has spent at least part of his tenure living in a house co-owned by the spouse of an energy lobbyist is merely a symptom of this larger problem... but it is, nonetheless, a symptom that tells us a great deal about just how the Trump administration is mismanaging key environmental issues.