Why Scott Pruitt's job may be safe after all

The president has lost some faith in his EPA head, but still holds out hope that he may be attorney general someday 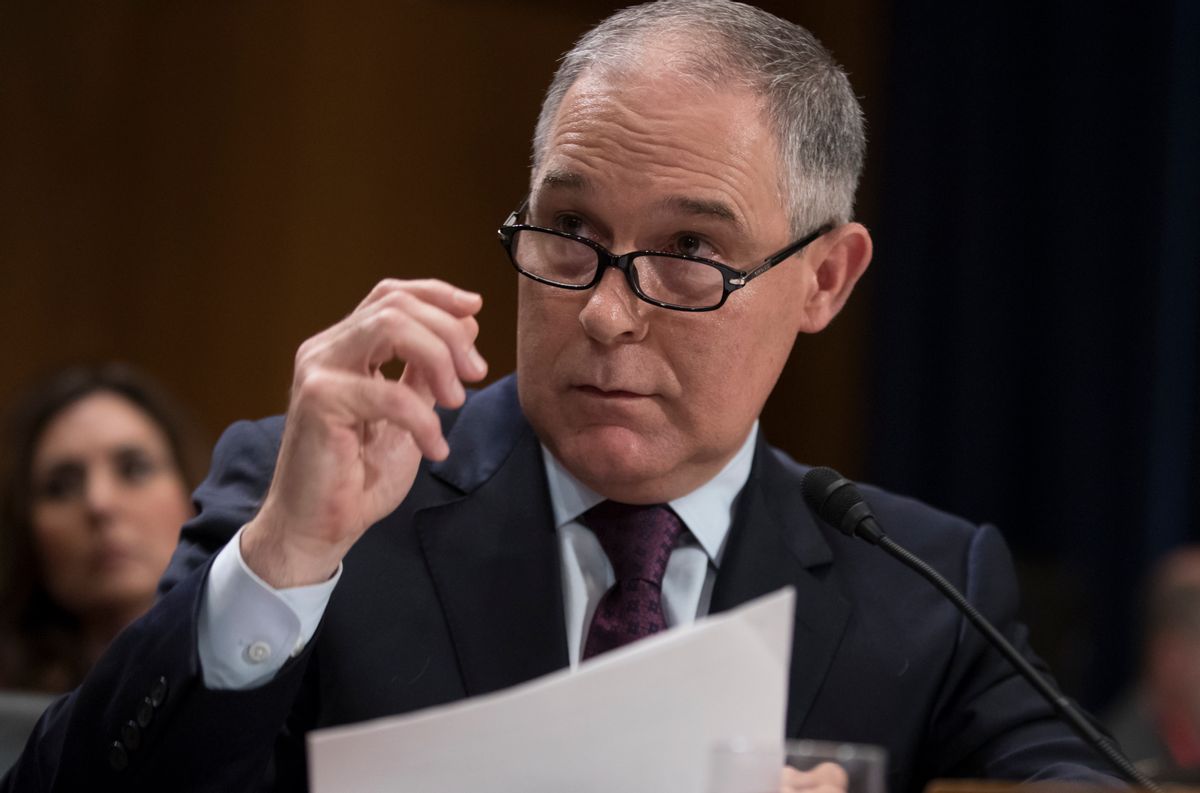 President Donald Trump is reluctant to fire Scott Pruitt, his scandal-plagued head of the Environmental Protection Agency, because he holds out hope to someday use Pruitt as a replacement for Attorney General Jeff Sessions.

The president attempted to dispel these reports on Thursday by reasserting his confidence in Pruitt and stating that "Scott's doing a great job where he is," according to CNN. Yet sources close to the president told the network that he had discussed swapping Sessions for Pruitt as attorney general as recently as this week, with one source explaining that  "he was 100 percent still trying to protect Pruitt because Pruitt is his fill-in for Sessions." This desire runs athwart the thinking of Trump's chief of staff, John Kelly, who reportedly has urged the president to fire Pruitt due to the growing number of scandals surrounding the former Oklahoma attorney general.

The litany of scandals that have emerged surrounding the EPA head has become foreboding. Within the past few weeks it came out that Pruitt had received a lucrative deal on a condominium rental from the wife of an energy lobbyist, raising suspicions about the implications of a subsequent report from The New York Times that clients from that lobbyist's firm had received favorable treatment from the EPA, according to The Washington Post. There have been subsequently been revelations that Pruitt may have had his public employees do private work for him, which would have been an improper use of government resources, and that Pruitt subverted White House orders in order to give one of those employees an unauthorized raise.

Pruitt has also been accused of punishing employees who have spoken out against his controversial behavior or not abided by his wishes. This has included at least five officials from the EPA being either reassigned, demoted or requesting new jobs after they discussed problems with how Pruitt was spending EPA funds or managing the agency. As the Times pointed out:

The concerns included unusually large spending on office furniture and first-class travel, as well as certain demands by Mr. Pruitt for security coverage, such as requests for a bulletproof vehicle and an expanded 20-person protective detail, according to people who worked for or with the E.P.A. and have direct knowledge of the situation.

Mr. Pruitt bristled when the officials — four career E.P.A. employees and one Trump administration political appointee — confronted him, said the people, who were not authorized to speak publicly.

On another occasion, as reported by CBS News, Pruitt punished the lead agent in his security detail for not allowing him to use his automobile's lights and sirens to cut through traffic and get to an appointment on time.

Several weeks after taking the helm of the Environmental Protection Agency, Administrator Scott Pruitt was running late and stuck in Washington, D.C., traffic. Sources tell CBS News that he wanted to use his vehicle's lights and sirens to get to his official appointment, but the lead agent in charge of his security detail advised him that sirens were to be used only in emergencies.

Less than two weeks later that agent was removed from Pruitt's detail, reassigned to a new job within the EPA.

The same article pointed out that Pruitt has spent more than $182,000 on travel and that the man who replaced Pruitt's former lead agent, Pasquale "Nino" Perotta, used his power to decide that the EPA head needed to fly in first class.

Unrelated to concerns about Pruitt's ethics in office, many critics have also blasted him for running the agency in a way that focuses on the concerns of the business community rather than protecting the natural environment.

Yet Trump may be willing to overlook his famous campaign promise to "drain the swamp" when it comes to Pruitt because of his dissatisfaction with his current attorney general, Jeff Sessions. Although Trump and Sessions used to be close friends, their bromance ended after Sessions decided to recuse himself from the investigation into whether the Trump campaign colluded with Russia during the 2016 presidential election. Trump concluded that Sessions was weak for making that decision and had not done enough to protect the president from that investigation. The circumstances surrounding the pressure that Trump exerted on Sessions regarding his recusal and the Russia investigation are part of special counsel Robert Mueller's larger probe.