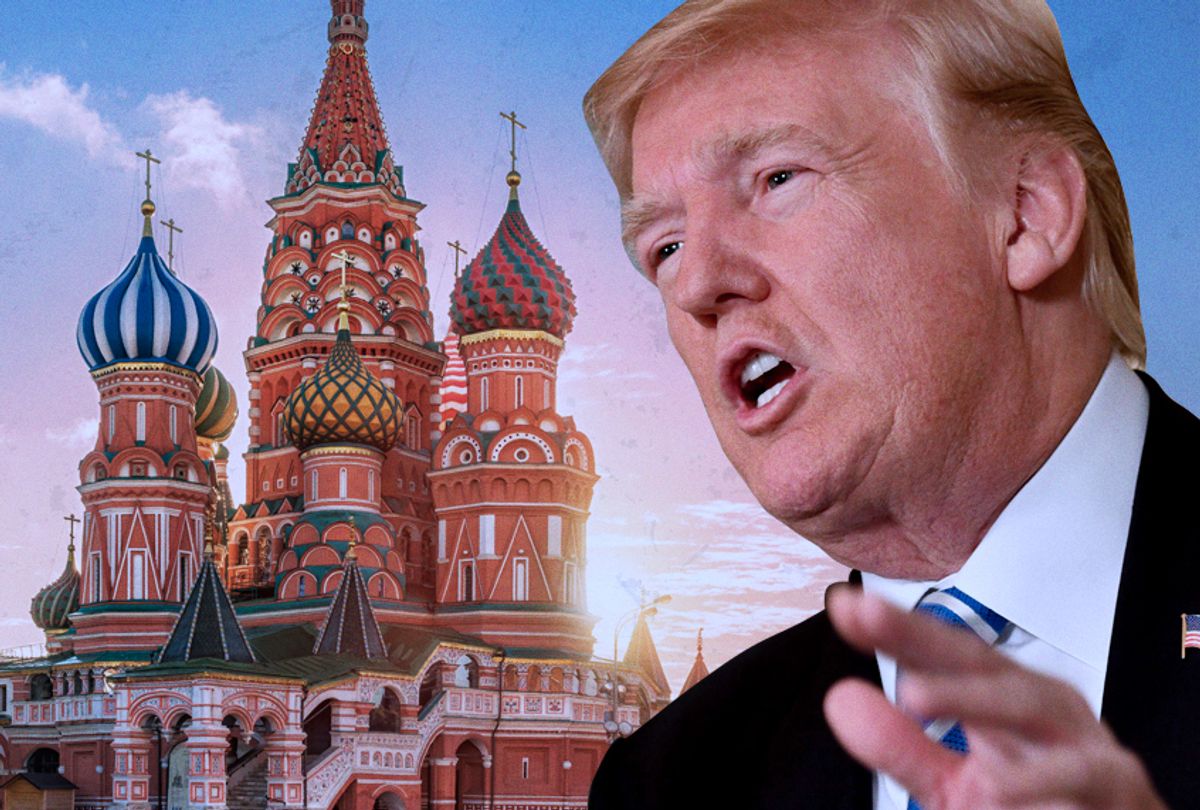 Don’t get too excited about the sanctions imposed by the Trump administration on Russian oligarchs yesterday. First of all, only seven of them were sanctioned, along with 17 “top government officials,” according to the New York Times. That’s really going to hurt them! Seven rich guys and a bunch of political hacks.

Imposing sanctions on Russians in April of 2018 is a little bit like closing the door of the chicken coop with the fox inside. Let’s have a look at what was going on two years ago, in April of 2016, shall we? Let’s see . . . Carter Page and George Papadopoulos had just been appointed as two of Trump’s “foreign policy advisers,” and Papadopoulos had begun his globe-trotting as a kind of international ambassador to anyone connected to Russia for the Trump campaign.

In early April, Papadopoulos traveled to Israel, where he spoke at the Begin-Sadat Center for Strategic Studies. According to the Jerusalem Post, “Trump, says Papadopoulos, sees Russian President Vladimir Putin as a responsible actor and potential partner.” In London, Papadopoulos was meeting with the shady “professor” Joseph Mifsud, who introduced him to one Olga Polonskaya, with whom he discussed setting up a meeting between Trump and Putin (Mifsud is reported to have recently abandoned his fiancée and his new baby in London and hasn’t been seen by her in months. His whereabouts are currently unknown).

Back in New York, Trump Campaign adviser Paul Manafort was emailing former Russian GRU agent Konstantin Kilimnick about his pal Oleg Deripaska, the Russian billionaire and chairman of that country’s largest aluminum company. And what do you know but good old Oleg turns up on the list of sanctioned Russian oligarchs they just announced! Nice guy to have one of your top campaign aides in business with, huh? (Manafort would soon be named Trump campaign chairman and oversee his nomination at the Republican National Convention.)

Meanwhile, over in London, mystery-man Mifsud has introduced globe-trotting Papadopoulos to Ivan Timofeev, Putin pal and director of the Kremlin-funded think tank called the Russian International Affairs Council. A few days later, at breakfast in a London hotel, Mifsud tells Papadopoulos he has just returned from Moscow, where he met with high-level Kremlin officials and learned that the Russians have “dirt” on Hillary Clinton, and would be willing to help the Trump campaign. The dirt is described as “thousands of emails.”

The same day, during a victory speech after winning several primaries, Trump cheerily tells the crowd, “We’re going to have a great relationship with Putin and Russia.” The next day, before Trump’s first foreign policy speech at the Mayflower Hotel in Washington, Trump adviser Jeff Sessions meets with Russian Ambassador Sergey Kislyak. The Russian ambassador is later overheard by NSA surveillance reporting back to his superiors in Moscow that he and Sessions discussed the Trump campaign and Trump’s plans for policy regarding Russia. Trump son-in-law Jared Kushner also meets with Kislyak. He would later tell the House Intelligence Committee that he hoped Russia would “like candidate Trump’s speech and his ideas for a fresh approach to foreign policy.”

Back in London, Papadopoulos is emailing his pal “professor” Mifsud and thanking him for his “critical help” in arranging a meeting between the Russian government and the Trump campaign.

So throughout April of 2016, multiple people on Trump’s campaign staff were in regular contact with Russians discussing campaign business including damaging information about his opponent, and Trump himself was on the stump lavishing praise on Russian President Vladimir Putin.

Two years later, after 13 Russian citizens and three companies are indicted for conspiring to defraud the United States government by interfering in the 2016 election; after the indictment and guilty plea of Trump’s first national security adviser, Michael Flynn, for lying about his conversation with — you guessed it — Sergey Kislyak promising to lift Obama-era sanctions on Russia; after the indictment of Trump’s campaign chairman and deputy campaign chairman for money laundering involving money from Ukrainian politicians friendly to Putin; and after the indictment and guilty plea of — you guessed it again — George Papadopoulos for lying about contacts he had with Russians during his work for the Trump campaign — two years later, the Trump administration finally decides it’s time to sanction a few oligarchs? Whoop de doo.

But while Trump is playing pitty-pat with sanctions, Special Counsel Robert Mueller is following the money.

Just this week we learned that Mueller’s investigators have been pulling what amounts to a “stop and frisk” on Russian oligarchs who are entering the country at airports, questioning one oligarch about his connections to President Trump and seizing his personal electronics. According to the New York Times, Mueller’s investigators also stopped and questioned Joel Zamel, an Australian businessman, about his ties to George Nader, the Lebanese-born “investment adviser” to the United Arab Emirates who was also stopped and frisked at Dulles Airport by Mueller’s people and is now cooperating with his investigation. Zamel was questioned about “Mr. Nader’s relationship with Russia and his contacts with Trump’s advisers, as well as the movement of money from the U.A.E. into the United States,” according to the Times.

In fact, Mueller has been turning up the heat in his Nader-related investigations in recent days. You will recall that Nader has had continued contacts with Trump and his campaign over the past two years. He arranged and attended a meeting at Trump Tower in December of 2016 between Jared Kushner and Trump “chief strategist” Steve Bannon and UAE ruler Mohammed bin Zayed Al-Nahyan. This was around the time that Kushner met with Sergey Kislyak seeking to set up a back-channel to Putin through the Russian embassy, where Kushner believed they could make use of Russian “secure communications.” Kislyak was picked up on NSA surveillance reporting his astonishment at the request back to his superiors at the Kremlin.

It was less than a month after those two Trump Tower meetings that Nader arranged the top secret meeting in the Seychelles Islands between Trump campaign adviser and Blackwater founder Erik Prince, Mohammed bin Zayed of the UAE, and Russian investment fund manager and pal of Putin Kirill Dmitriev. Prince was allegedly representing Trump in an attempt to set up a back-channel to Putin through Dmitriev. The Times reports that “Mueller’s investigators have asked multiple witnesses about the Seychelles meeting, part of a broader line of inquiry surrounding contacts between Emirati advisers and Trump administration officials.”

And just this week it became known that Trump’s personal attorney, Michael Cohen -- yes, he of Stormy Daniels fame -- has come under the Mueller microscope for Trump Organization deals he was involved in before Trump’s election, in Kazakhstan, Uzbekistan, and -- you guessed it -- Russia.

What do all of these lines of inquiry have in common? Russia and money. Mueller appears to be currently operating on a “theory of the case” that Russian money found its way into the Trump campaign. The indictments of Paul Manafort and Rick Gates for money laundering appear in a different light since it was revealed by Mueller in a court filing last week that his investigators have expanded their investigation of Manafort, and it is continuing.

Mueller told the court that he has authority from the Department of Justice to investigate whether Manafort “committed a crime or crimes by colluding with Russian government officials with respect to the Russian government’s efforts to interfere with the 2016 election for President of the United States, in violation of United States law.” That’s new, and given Manafort’s penchant for moving funny money around, it opens the door to a whole new passel of potential charges against him.

Also being investigated by Mueller’s team is Alexander Torshin, a deputy chairman of Russia’s central bank, who claims to be a lifetime member of the National Rifle Association and has made major contributions to the gun group over the years. He is reportedly under investigation for allegedly funneling money to the Trump campaign through the NRA.

Torshin is one of the oligarchs on Trump’s sanctions list this week, an interesting choice considering he has been a frequent visitor to the United States. He is known to have attended several NRA national conventions in recent years and met in 2015 with Donald Trump Jr. at one of them. But now Torshin will not be one of the oligarchs Mueller’s team is able to stop and frisk at customs as he enters the United States because he has been sanctioned from travel to these shores. Remember Manafort’s pal, Oleg Deripaska?  He’s on the sanctions list, too. Convenient, don’t you think, that two Russians Mueller would doubtlessly like to question are barred from entry into the United States.

But it’s Mueller’s continuing interest in the secret Seychelles meeting between Erik Prince and Putin pal Kirill Dmitriev that holds the most promise. Mueller seems to be in the process of getting an answer to a very basic question. Only days before Trump was inaugurated, when Trump would be able to lean back in his chair in the Oval Office and pick up the phone and talk to President Putin in Moscow any time he wanted about relations between the two countries, why would he need a back-channel to the Russian leader?

Mueller is looking for the answer to that question, and he’s going to find it the way they uncovered so much during Watergate: by following the money.